Kigen is using Smore newsletters to spread the word online.

Get email updates from Kigen:

What is a fuel cell vehicle?

A fuel cell vehicle is made up of three parts: an electrolyte, an anode, and a cathode. A fuel cell is very similar to a battery, it functions like one and produces electricity like one. But instead of being recharged like one, the fuel cell can be refilled with hydrogen. There are many types of fuel cells such as: Polymer Electrolyte Membrane Fuel Cells, Direct Methanol Fuel Cells, Phosphoric Acid Fuel Cells, Molten Carbonate Fuel Cells, Solid Oxide Fuel Cells, and Regenerative Fuel Cells.

How does a fuel cell work? 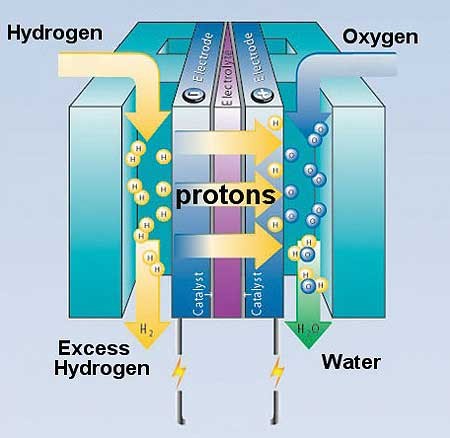 Why are fuel cell vehicles better?

In the world we live in today one of the main conflicts and threats we face is air pollution. The fuel cell car produces almost no harmful emission. Most of the emissions from a fuel cell vehicle are heat and water. Fuel cell vehicles emit about 25% less toxins in the air compared to hybrid vehicles (HEV's). It also solves another huge American problem, foreign oil dependency. Fuel cell cars don't even use oil so we wouldn't have to rely on foreign oil. Unlike oil, there are many sources of hydrogen in the world so we wouldn't have to worry about it running out.

Description of the A.F.C.V. and our plan of action

Kigen is using Smore newsletters to spread the word online.

Follow Kigen Shealy
Contact Kigen Shealy
Embed code is for website/blog and not email. To embed your newsletter in a Mass Notification System, click HERE to see how or reach out to support@smore.com
close