Ichabod Crane is a stern schoolteacher and singing instructor who has come to Sleepy Hollow, New York, from Connecticut. He is lanky and sharp-featured, awkward and somewhat clumsy, but more educated and sophisticated than the native villagers. He is quite fond of food, and is well fed by the neighboring housewives, who share his delight in telling and re-telling ghost stories. When he sets his sights on marrying Katrina Van Tassel, it is not because of any feeling he has for her, but because her father is wealthy and Crane admires the food that is always displayed in the Van Tassel home. Katrina refuses him, however, preferring the manly and strong Brom Bones. In his disappointment Crane allows his imagination to run away with him. He is tricked by Brom into believing that he is being chased through the night by a headless horseman. In the morning he is gone, having left town without saying good-bye. 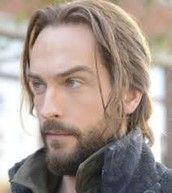