Kacy is using Smore newsletters to spread the word online.

Get email updates from Kacy: 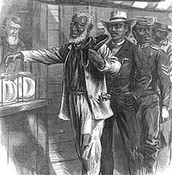 The Fifteenth Amendment prohibits the federal and state governments from denying a citizen to the right to vote based on that citizen's "race, color, or previous condition of servitude".

The Voting Rights Act was signed into law by Pres. Lyndon Johnson. This act aimed to overcome legal barriers that denied African-Americans their right to vote under the 15th Amendment. It secured voting rights for racial minorities throughout the U.S., especially in the South. It is considered to be the ¨most effective piece of civil rights legislation ever enacted in the country".

Kacy is using Smore newsletters to spread the word online.