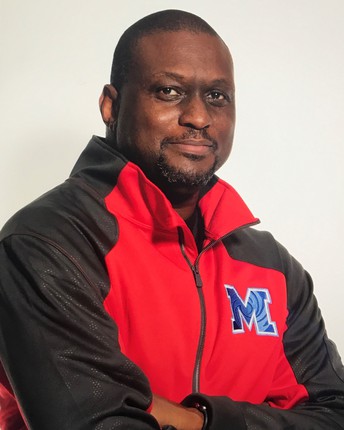 From the Desk of Curtis Price

While we waited anxiously for athletics and activities to resume, there was one activity that never stopped during COVID. Our chess team was able to continue their season and compete in the IHSA State Series. Instead of coming from my desk, I wanted to allow our chess coach, Mr. Tim Miller, to share his experience during the State Series.

Coach Miller, the floor is yours...

This year's chess team has been special. We have three seniors, Jade Mikalauskis, Tim Miller, and Peter Walsdorf, who were here from the beginning as freshmen when Chess became a Marian Central IHSA activity. The team went to state that year, and every year since then. The inaugural season was incredible, and each year after that has been amazing in its own way. It is hard to say goodbye to our seven seniors as we have shared a lot of memories together over the years. The seniors that joined after their freshmen year are Markus Pomili, Phillip Paulson, Aidan Robertson, and Jeremy Kleberg. It has been a strange year, competing via computer rather than in person. But as you will see, even COVID-19 restrictions can, on rare occasions, have a benefit. State competition brings special memories that can last a lifetime. I would like to share with you some of this year’s highlights.

On Friday night, our record at State was 1-1 going into game three. As the match progressed, it became clear that it was extremely close. Towards the very end, we had two players still competing. Timmy Miller was competing on the #1 board, and Markus Pomili was competing on the #4 board. The score at this point was Marian 24.5, Orland Park 23.5. We knew if we could get 2 draws, we would win. I asked Timmy if he thought he could get a draw or better and he said yes. I was sitting across from Marcus, and I knew Marcus’ game was very close. I said, “Marcus, offer a draw”. He did, and it was declined. A few minutes later, Marcus came through and was able to achieve the draw by forcing it. Way to go Marcus! Now only Timmy was left, we needed a draw or a win to win the match as a team. It was a dizzying position. Timmy had been way down on time but now it was his opponent that had less than a minute, while Timmy had about 2-3 minutes left. Once the opponent got down to 30 seconds, the exchanges started happening at a rapid-fire rate, not unusual with such little time left on the clock. I remember yelling, “yes, yes, go Timmy, go Timmy!” as I watched it all unfold. Timmy took over the game at the end and advanced for another queen and completed the mate with his opponent having a few seconds left. I remember jumping and dancing around the cafeteria. It was awesome! That is one great thing that could have never happened had it not been for COVID-19. In chess, we must be completely quiet and still. But being virtual, we could cheer on our teammates and this year it was exciting to be able to do that with everyone. Every time I saw one of our players do a checkmate, it was great to give them an enthusiastic shout out! Keeping that inside is not easy, this year we could let it out and that part of the virtual situation was great!

While COVID has turned our world upside down, our coaches and students have proved that this pandemic cannot ruin their season. With the return to sports, Marian Central has invested in livestream technology that provides our community with the ability to watch all games in both gymnasiums. The Marian Central experience will continue to provide great memories for everyone to share.

Since we are over halfway through this most unique school year, it is important to know and understand that we at Marian Central continue to put the education and safety of our students first. Since our quick pivot from full in person at the beginning of the 2020-21 school year, we developed our flexible Hybrid teaching and learning model, consisting of both onsite and remote instruction. Throughout the first semester, our staff has done a great job balancing the varying needs of our hybrid and fully remote students as they plan and create innovative lessons, and we would like to commend our staff, parents, and students for a continued job well done.

While we understand and acknowledge that our Hybrid model has been relatively successful for many of our students, we also know that there are some students who may need additional academic and social/emotional support.

With that being said, we feel that all stakeholders should have a voice as we assess our teaching and learning program, safety protocols, and communication. Marian Central is requesting that each of our key groups, including teachers, non-instructional staff, students, and parents/guardians complete the following survey by Friday, March 5, 2021. Please click on the link below to access the survey.

Students will be taking their own brief survey next week at the beginning of their Theology classes, so if you can, please encourage them to be as candid as possible regarding their experiences.

We would like the community to know that safety is a priority, balanced with delivering the highest quality educational experience for all Marian students. We are continually monitoring the impact COVID-19 has within McHenry County, and more specifically at Marian Central with the hopes that we will one day soon be able to welcome all staff, students, and community members back into our halls without limitations.

Thank you once again, Marian Central Families, for your continued support during these difficult and challenging times.

Students/Parents - we have extended the deadline for course selections to this Monday, February 22 at 8:00 a.m. to give you more time to log-in and choose courses. Any questions, please email your Guidance Counselor - Mrs. Hilton (Sophomores): khilton@marian.com or Mr. Kruse (Freshmen, Juniors): tkruse@marian.com

According to the original 2020-21 calendar, on March 12th there was a noon dismissal for students with a teacher inservice in the afternoon. Please note that March 12th will now be a full day of asynchronous learning. The guidelines below will be followed:

Due to this change, the March red/blue calendar that was shared in last week’s Friday Focus has been updated. Please see the updated March calendar below.

Even though Marian Central has switched the schedule for Friday, March 12th from a ½ day to a full day of asynchronous learning, Marian Central will still be offering the opportunity for students to take a practice ACT test. There are still spaces available for the online/virtual option, which can be taken from home.

The online/virtual practice test begins at 1:30 PM and will take roughly 4 hours to complete.

Any students still interested in registering can register online at: www.revolutionprep.com/partners/6911. The deadline to register for the test is Friday, February 26th. Please contact Mr. Stamatakos in Guidance with any questions about this opportunity. 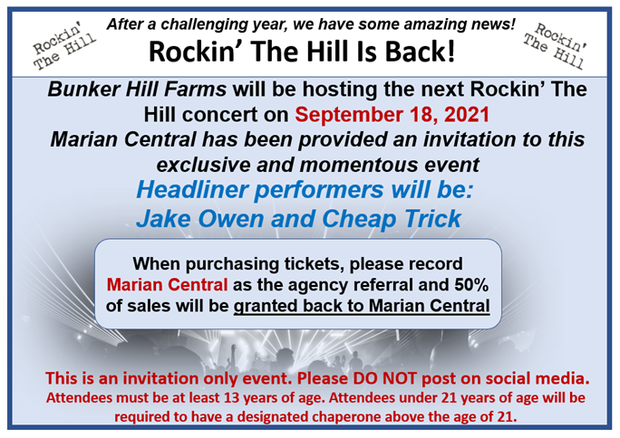 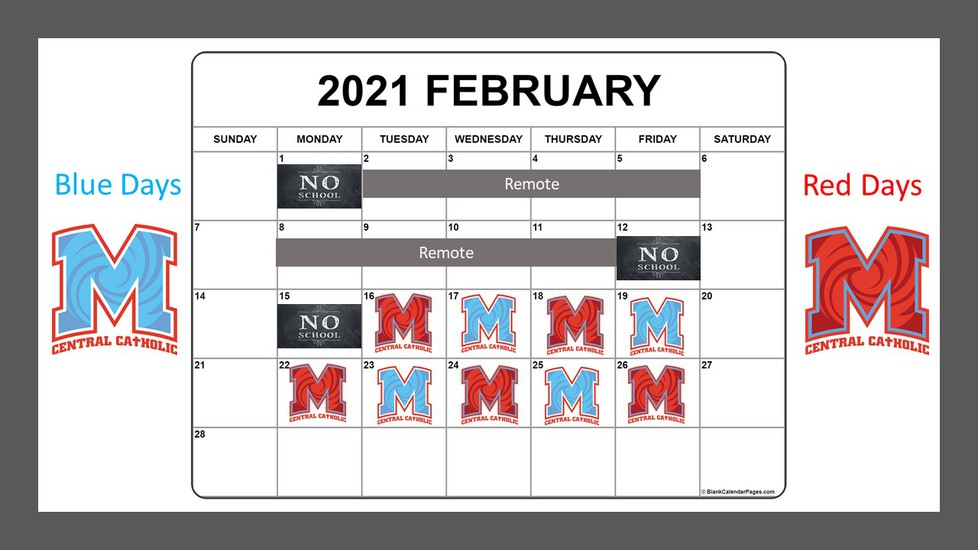 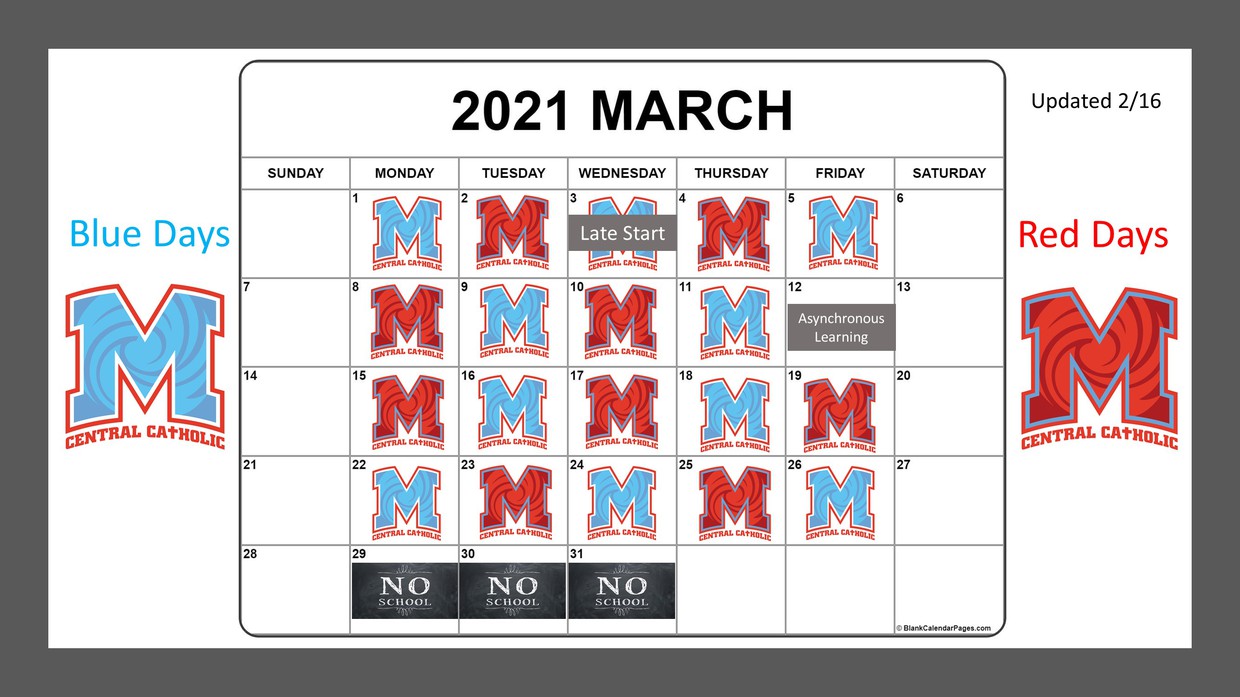