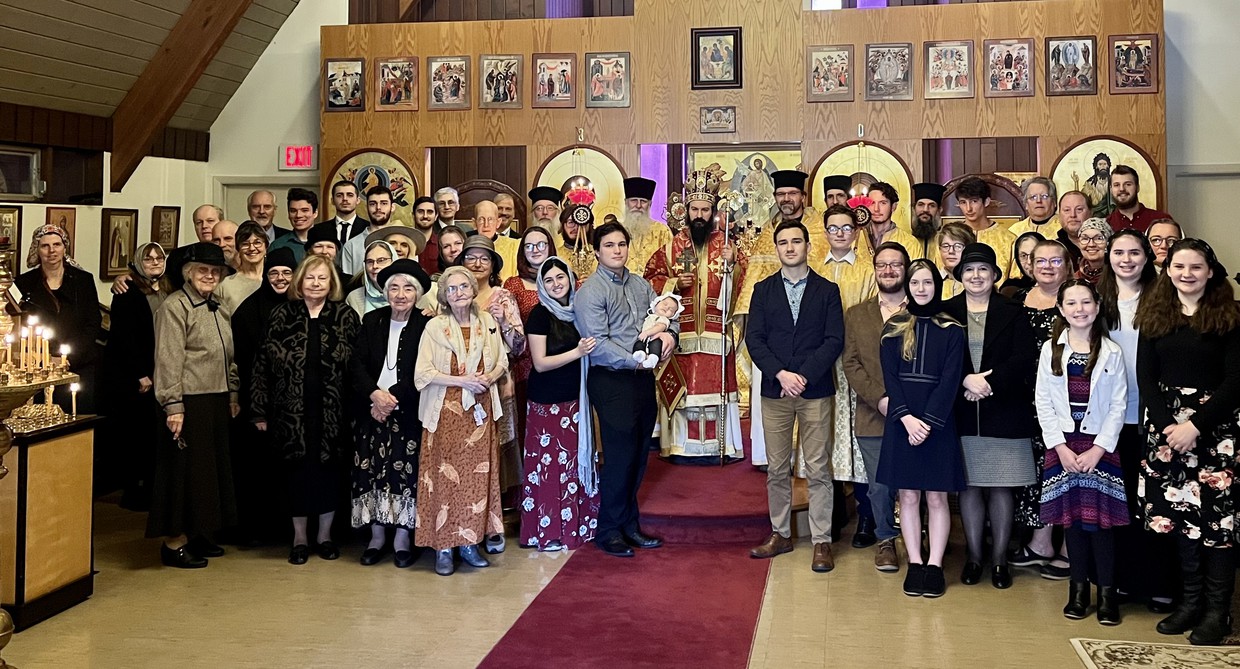 Support our Parish and make a donation!

Use Tithe.ly to create a monthly donation or a one time gift!

We heard three Gospel readings today: the first for Sunday, the second for the Fathers of the 7th Ecumenical Council, and the third for the Elders of Optina. I would like to concentrate on the first Gospel reading, but I think it also ties in to our celebration of the memory of the fathers of the 7th Ecumenical Council, who you may recall, defended the use of images in worship.

In this first Gospel, the Lord had such a multitude pressing against Him, that He got into a boat and asked the fisherman to push him out a bit from the land. From there He taught. After He had finished, Christ turned to Simon the fisherman, who we know as the Apostle Peter, and He tells him to “Launch out into the deep, and let down your nets for a catch.” Pay special attention to the way the Apostle replies. He says: “Master, we have toiled all the night, and have taken nothing: nevertheless at thy word I will let down the net.” The Lord’s request makes no sense to him. If they have not caught anything having tried all night, why would this time be any different? The Apostle Peter uses his entire self, his mind, his heart and his body in this instance. Even though his mind tells him that it doesn’t make sense, he takes action based on what his heart is telling him. It is not that he ceases to think, for he announces at the outset that he knows that this doesn’t make sense – it is that his rational self is tempered by his heart. Many church fathers, such as St. Nicodemos of the Holy Mountain, write about keeping your mind in your heart. This is usually applied to prayer of the heart, but not exclusively. By saying that we should gather our mind in our heart, the fathers do not tell us to shut down our minds, but simply to bring them in line with the direction of the heart. Though the heart is primary, it still works in concert with the mind. We are surrounded by a world that is intent on divorcing the two. When the mind is exalted and the heart is shut down, we would find ourselves at home in the cold cynical halls of academia. On the other hand, if we were to completely stop using our minds, we may end up falling under the sway of some fly-by-night feel good charismatic “Christianity.” But if one were in search of the truth with both heart and mind, God-willing one would inevitably be led into Orthodox Christianity. Remember, the Lord told us: “Love the Lord thy God with all thy soul, and with all thy heart and with all thy mind.” As Orthodox Christians, we know that we worship with all our senses, but it is important to realize that our heart and mind must actively work together as well.

So, St. Peter uses his mind, but lets his heart lead and lets down his nets. He and his fellow fisherman find that they have gathered such a multitude of fish that their boats begin to sink. And the Gospel says: "When Simon Peter saw it, he fell down at Jesus’ knees, saying, Depart from me; for I am a sinful man, O Lord. […] And Jesus said unto Simon, Fear not; from henceforth thou shalt catch men." Now, imagine if the Lord had simply said “You men will have a lot of success proselytizing,” without the entire episode with the fish. It would clearly not have had the same impact on our minds. But the Lord knows our physical nature, and so what does He do? He uses an image to convey His teaching. The fathers of the 7th Ecumenical council used much the same reasoning for proclaiming iconography as a valuable aid in teaching as well as in focusing our attention during prayer.

There is one more image that becomes clear to us as we study this Gospel reading: that St. Peter came up empty-handed in the darkness of the night, but has an over-abundance in the light of Christ. St. Maximus of Turin writes the following:

“Peter, who beforehand was unable to see in order to make a catch, enduring darkness without Christ, had indeed toiled through the whole night. But when the Savior’s light shone upon him, the darkness scattered, and by faith he began to discern in the deep what he could not see with his eyes.”

As St. Maximus points out, success comes to the Apostle Peter only with Christ. And not just a little success but tremendous success, for as we read there were so many fishes that they needed two boats, and even these began to sink from the over-abundance. Note the interesting contrast between this episode with Peter and the story later on in the Gospels. He asks the Lord if he could walk on the water towards Him, only to begin sinking. In that instance he begins to sink because of lack of faith, but here, his boats begin to sink because he acted on faith. Yet the sinking of the boats doesn’t seem to bother the Apostles. Perhaps this is because they realized the purpose of this catch was not to bring home a great number of fish, but to reach their hearts. Once you allow Christ to reach your heart, losing all of your material possessions doesn’t seem to phase you. And apparently this is exactly what happened, for Peter does fall down before the Lord, declares his own unworthiness, and then the Apostles forsake all that they have to follow Him.

What can we take away from today’s Gospel reading?

We must use the tools, the gifts that we have been given by God for our salvation: our minds, the images of holiness that surround us in church as well as in the lives of the saints, the faith we have been given by God, and perhaps most importantly, Christ Himself. St. Peter could do nothing without Christ, the Apostles could do nothing without Christ, indeed the Theotokos, all of the saints, and each one of us can do nothing without Christ. Being conscious of this is the struggle of every Christian, but as Orthodox Christians, we are given the opportunity to encounter Christ in the Mystery of the Holy Eucharist. Use these tools, brothers and sisters, for so Christ instructed us, and so the saints have demonstrated for us.

I feel I would be remiss in ending my sermon without mentioning the missionary aspect of this Gospel. The Apostles were indeed told to proclaim Christ to the world, but so are we all, for we would not have great missionaries like St. Mary Magdalene, St. Nina of Georgia, and St. Herman of Alaska if holding a clerical rank were a prerequisite. Share with those around you this Pearl of Great Price. Don’t push, but don’t hide Him under a bushel either. In fact, if our lives are centered on life within the Church that Christ has established for our salvation, hiding this fact would be impossible. Let us all strive to make ourselves into images of holiness so that those around us might experience the love of God. This is the best witness of all.

Lord, Jesus Christ, Son of God, have mercy on us. Amen. 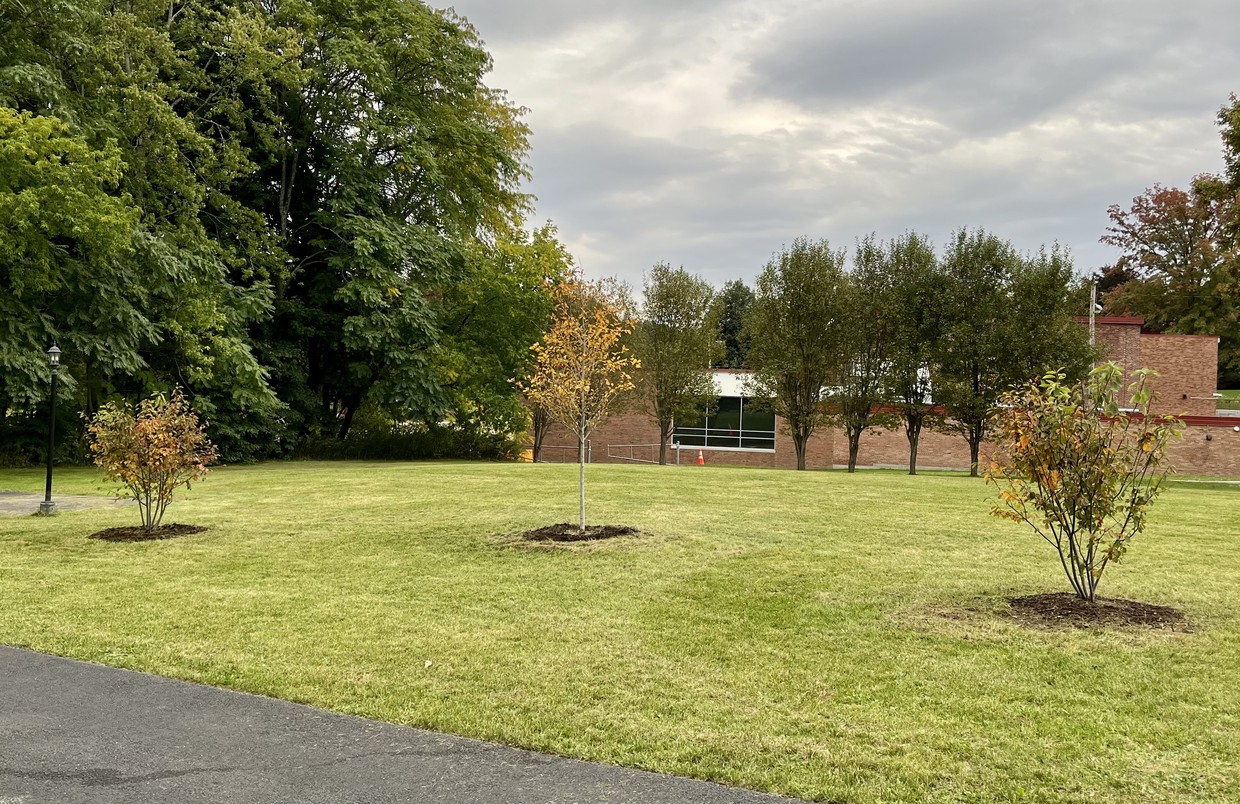 Glory to God for all Things!

We now have three new beautiful trees on our church property!

These trees will all flower white in the spring, change colors in the fall, have small leaves that we can mow, are native trees, and will do well in our field.

The trees have been donated in memory of our dear, departed parishioner, Vladimir Maximciuc. May his memory be eternal!

Special thanks to John, Larry (Sebastian), and Luke for their efforts in planting these trees. 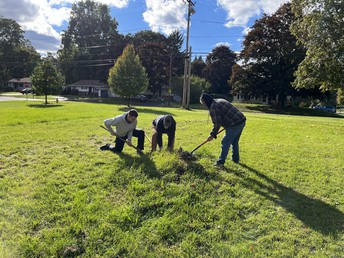 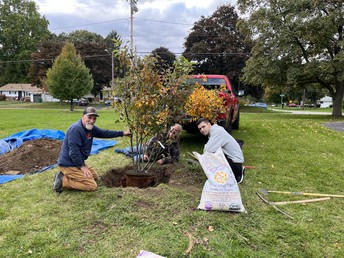 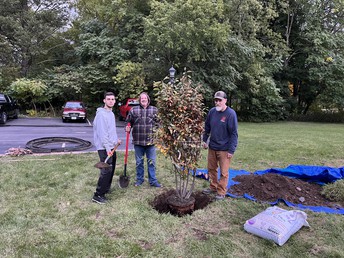 A New Member of the Body of Christ 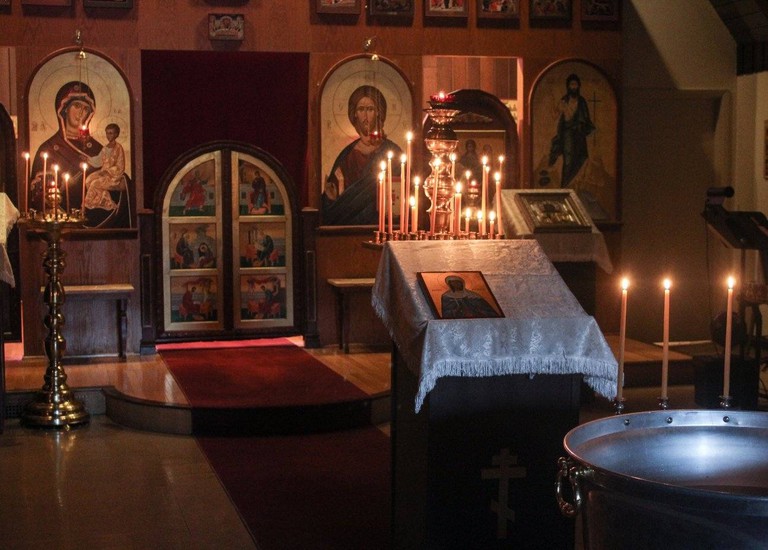 Many years to our newly illumined Felicity, her parents, and Godparents! 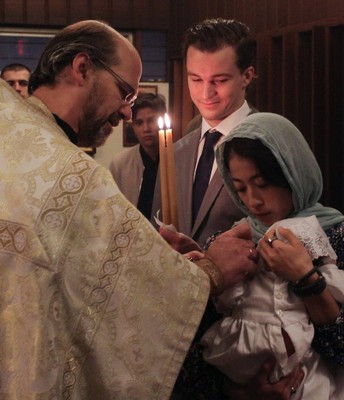 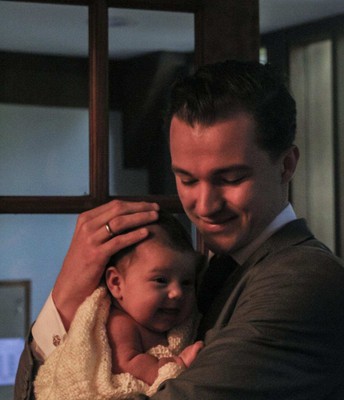 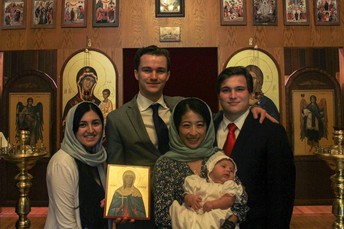 Visit by Metropolitan Demetrius for the 15th Anniversary of our Founding 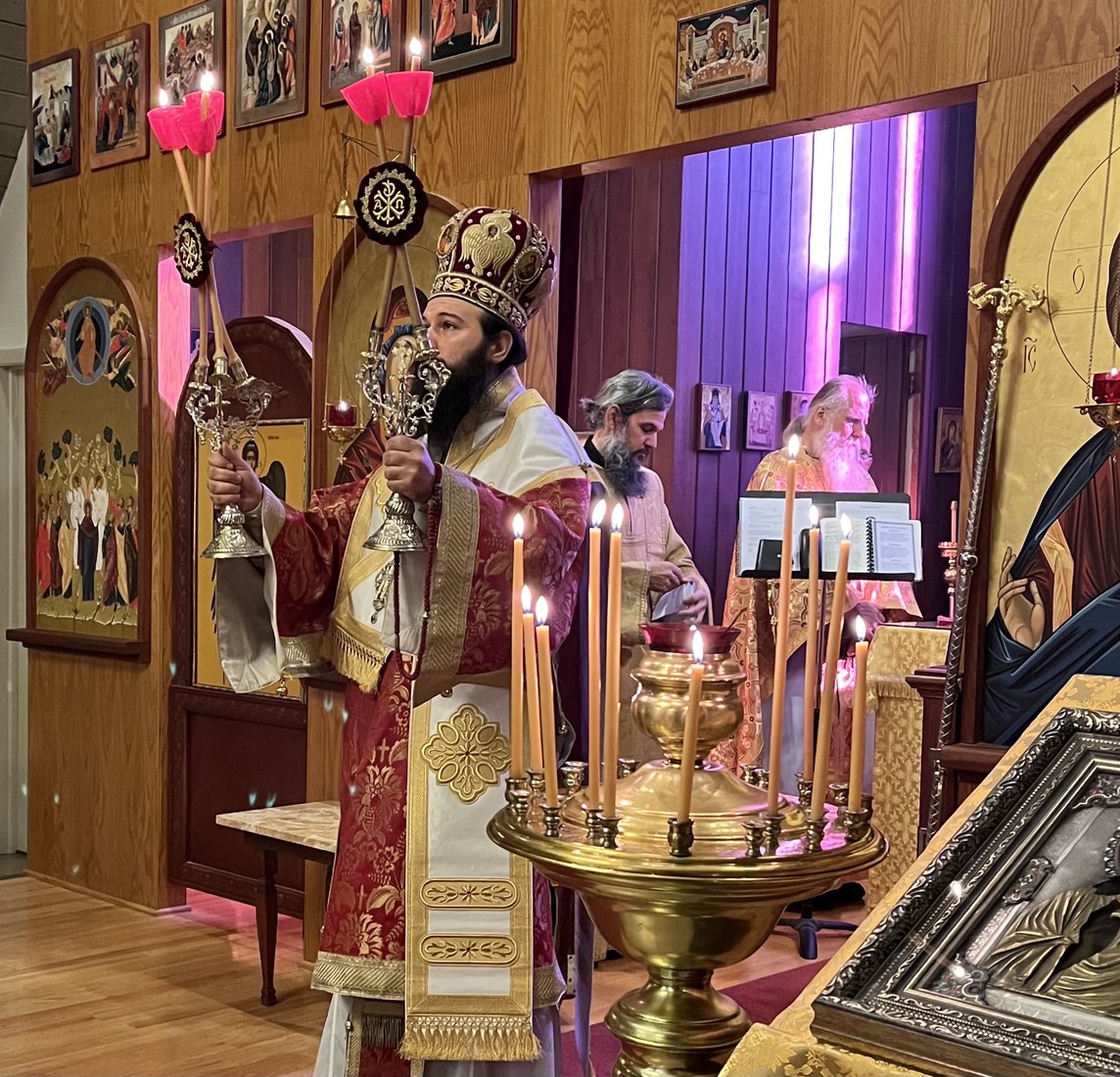 Glory to God for all things!!

On Saturday and Sunday, October 29/30th our Arch-pastor was able to service Vigil and Divine Liturgy with our parish to celebrate the 15th anniversary of our founding. We were also blessed to have Fr. Benedict from St. John's Monastery, Fr. Dimitri, Dcn. Peter, Dcn. Vasilios, and our rector, Fr. Nicholas, serving the Divine Liturgy.

Enjoy the photos of our blessed event! 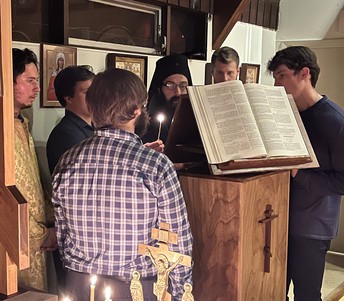 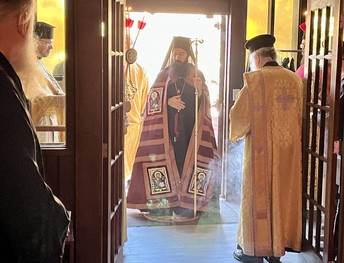 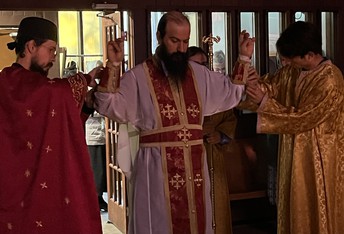 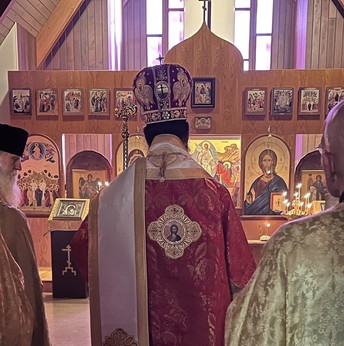 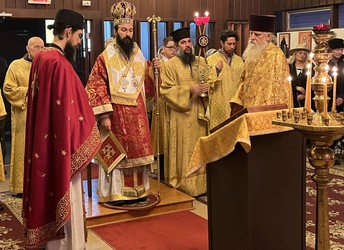 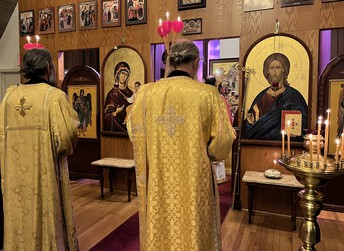 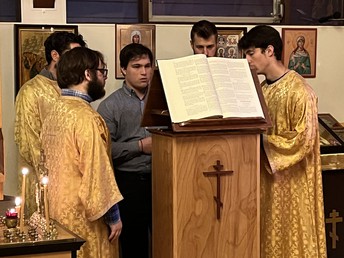 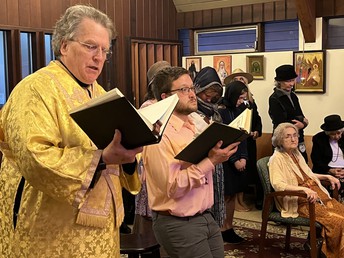 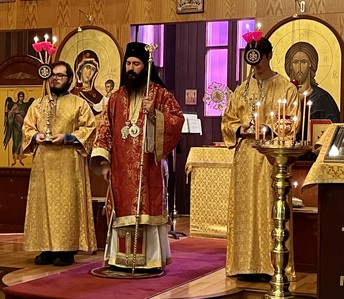 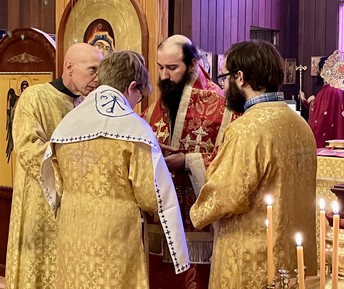 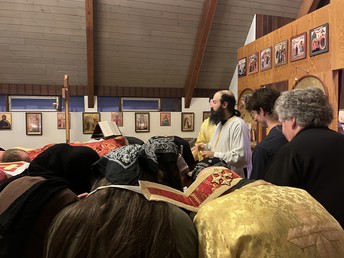 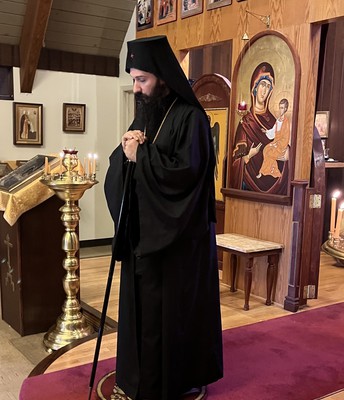 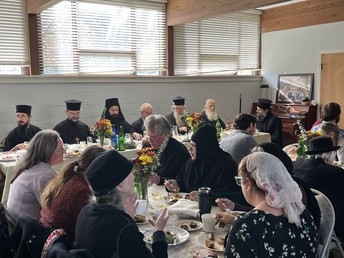 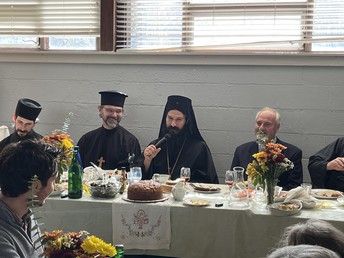 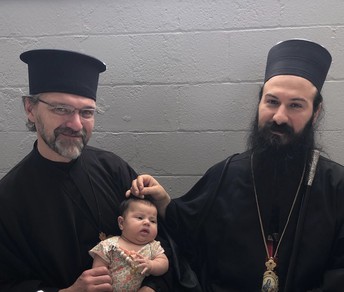 From the Parish Council

Special thanks to our Head Sisters and to our Brotherhood for all their efforts in cleaning and preparing for a wonderful celebration and delicious feast with our Metropolitan Demetrius and all our guests! Glory to God for all things!

NEW EVANGELISM COMMITTEE - With the blessing of Fr. Nicholas and the support of the Parish Council, a new committee has formed and begun it's work to focus on missionary efforts in our area. The committee includes Fr. Nicholas, Subdeacon Adam, John Pontrello, and Ben Chernjavsky. May the Lord bless!

If you are interested in helping with projects and chores (large or small), please reach out to our church warden, Sasha Soubotin (el_cawa@hotmail.com), or our head sisters, Christina Roller (honeybees5959@gmail.com), Vicky Selznick (vmselz@icloud.com), and Stephanie Rindell (srindell@yahoo.com).

November 6 - Holy Martyr Arethas and those with him 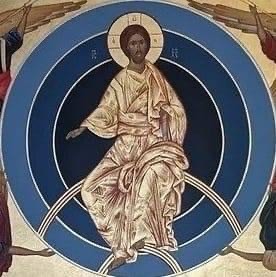 Facebook
We are a parish of the Church of the Genuine Orthodox Christians of Greece.

650 North Landing Road, Rochester, NY, USA nchernja@rr.rochester.com 585-217-6746 holyascensionofchrist.org
Embed code is for website/blog and not email. To embed your newsletter in a Mass Notification System, click HERE to see how or reach out to support@smore.com
close
Powered by Smore
Powered by Smore