Get email updates from Matilda-Belle: 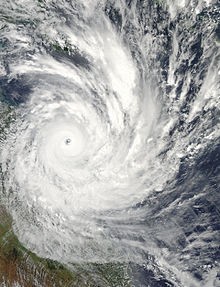 What causes tropical cyclones to form and what characteristics of them do we need to be concerned by?

Tropical Cyclones are form over large bodies of warm tropical water. The minimum temperature in the water would have to be 26°c to start a tropical cyclone. Cyclones are very destructive they destroy many things with their strong winds and heavy rain. The hot air, being lighter than the cooler air around it, rises taking a lot of water vapour with it. As the water vapour rises up it cools to form big cumulus clouds. This creates low pressure at sea level. The seriousness of a cyclone is a concerning characteristic. Cyclones have been recorded up to 2,170 kilometers wide, which would cause a lot of damage over a wide area. Rain and flooding from a cyclone can affect people’s community’s businesses, land and home etc.

What cause a tropical Cyclone to form?

Movement: movement because of the heavy wind from the cyclone and the damage the wind makes because it moves things around. Also because the movement of the water/sea when the cyclone is being formed.

What was the pathway of Yasi and how did this affect the cyclone?

Cyclone Yasi started to form 330 km of the northwest coast of Fiji. It was first said to be a tropical disturbance. as the so called tropical disturbance got bigger and started to move close to Vanuatu they now found out that is was a tropical cyclone. it was now located approximately 370 km northeast of Vanuatu. then Cyclone Yasi travelled across the Coral Sea and hit mainland Australia close to Mission Beach at midnight on the 3rd February, 2011.Cyclone Yasi travelled approximately 2396 km across tropical water, in the time it was crossing the tropical water it was building up energy and mass finally when it hit land it was a giant wall of wind it had a lot of power from traveling over the warm tropical water for such a long time.

Region: because it is explain the pathway of cyclone of all the place it hit

Movement: because when the cyclone travelled over the ocean it build up power so when it moved over water it moved the water around. 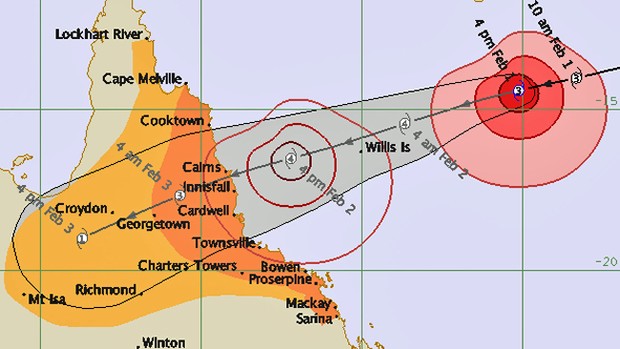 What were the characteristics of Yasi?

Cyclone Yasi was one of the worst cyclones to ever hit Queensland. Yasi Hit Queensland with heavy. Yasi brought huge winds which are typical of a tropical cyclone, with the huge winds destroying everything in its path. The highest official wind gust was recorded at midnight around Lucinda Point at 185km/h. Tropical cyclones are well known to cause storm surges. The power of the cyclone forces tides to go in much more than normal and which will create a wall of water. Cyclone Yasi brought a storm surge of 5 metres high that is 2.3 metres higher than the normal tide. The strength of a tide like that washed boats from the marina up onto the shore on top of one another.

How were the natural and cultural landscapes affected by Yasi?

When cyclone Yasi hit Parks and forests suffered a massive tree loss with many of the canopies stripped of all there leaves and branches. Lucky forests in the tropics have adapted to the extreme weather conditions of a cyclone and are ready to spring into action when it hits so this means that the tropical rain forests normally don't get affected.

The most worrying impact that the cyclone brought to Queensland’s natural landscape was the damage to the the homes of two endangered species, which are the southern cassowary and the mahogany glider. The loss of the canopy fruits caused many food shortage for the southern cassowary. since the loss of the canopy fruits it has forced them out of their own lowland rainforest homes and into the way of cars and dogs which is dangerous for the southern cassowary. The mahogany glider already only had a little strip of lowland sclerophyll forest and Cyclone Yasi has damage most of the lowland sclerophyll forest habitat.

The cultural landscape of far north Queensland was transformed and changed by Cyclone Yasi. Houses were flattened, roofs were ripped off and fences blown away It was crazy. 150 houses were destroyed by and another 650 were left uninhabitable. about 200,000 homes lost power and even one month after Yasi hit there are 700 still unconnected due to safety concerns.

Cyclone Yasi impacted very badly on banana plantations. Far north Queensland provides 90% of Australia’s bananas. In 2006 the banana plantations were affected very badly by Cyclone Larry. Larry Destroyed 100% of the banana crop. Cyclone Yasi damaged only 75% of the banana crop. the worst hit plantations were Tully and Innisfail which grow the majority of Queensland bananas they were hit worst. after the all the damage Yasi cause owners raised that banana prices 470% and Before the cyclone they only costed as little as $1.98 a kilogram, but after Yasi hit they were up as high as $15 a kilo.

The Great Barrier Reef was greatly affected by Cyclone Yasi. Though damage was scattered some reefs were to rubble while others were barely even touched the experts have say that coral could take up to 20 years to recover fully. The storm surge made by Cyclone Yasi also caused severe flooding, allowing toxic chemicals and debris to enter the reef and damage fragile coral.

What new laws have been introduced in australia due to cyclone yasi?

since cyclone yasi hit new laws have came in like where structures were aloud to be built, they have made that law because structures on the low land will get flooded and much more damaged. telephone poles have to be placed on hills also they have changed the particular building materials like roof cladding, tie downs, stronger windows and doors. these laws have been brought it because Queensland will be more ready and they will be safer.