Throughout Barack Obama's inaugural address, it is evident that we hold these truths to be self-evident, that all men are created equal, that they are endowed by their Creator with certain unalienable rights, that among these are Life, Liberty, and the pursuit of Happiness. "What makes us exceptional – what makes us American – is our allegiance to an idea, articulated in a declaration made more than two centuries ago:" "Together, we determined that a modern economy requires railroads and highways to speed travel and commerce; schools and colleges to train our workers." 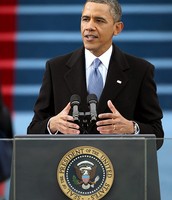 President Barack Obama speaks after being sworn in during the presidential inaugural on the West Front of the U.S. Capitol.

Barack Obama arriving at the Capitol before his inaugural address in 2013.

President Barack Obama swearing on the bible before his inaugural address. www.theguardian.com
In case you missed it, here's the full text of President Obama's inauguration speech