They heard a gunshot all around the world

A huge shot started the A.R. It was a war that could change our United states. A great man saved the united states. It was Paul R.. The M. were ready to fight in a min.. 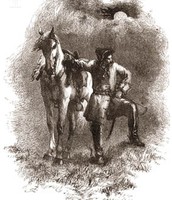 The Minutemen were a group of colonists that formed a army. They were called the Minutemen to a min. to notice. They also fought in the Lexington and Concord war. The British lost their guns because Paul R. took the guns. Good thing they won.

The colonists were mad about taxes. They had no one to represent in Parliament. The phrase "No taxation without Repersation!" became the colonists' battle of cry. They were going to pay taxes if they didn't have voice of government. That's how it started.