Based on the Marxist Literary theory

Based on the Marxist Literary theory 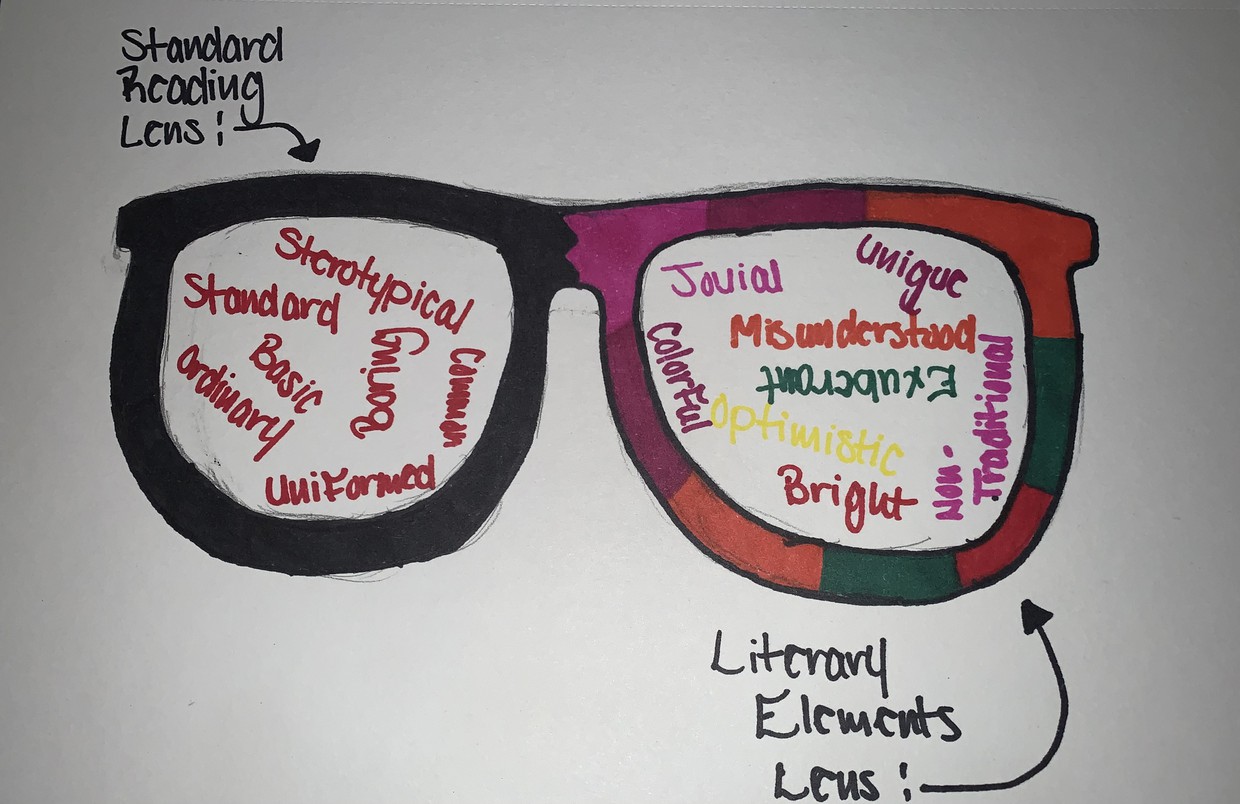 Text-to-Text- What I just read reminds me of the movie “House Party” because it's about this legendary party being thrown and it's the party that you don't want to miss. On page 32, it states, “There was music from my neighbor’s house through the summer nights. In his blue gardens men and girls came and went like moths among the whisperings and the champagne and the stars,” which is in reference to a (house) party happening.

Text-to-Self- What I just read reminds me of when I used to go to church. I say this because I too was well-dressed, a little hungry, and talked in a low earnest voice. It mentions this description on page 34. “I was immediately struck by the number of young Englishmen dotted about; all well dressed, all looking a little hungry, and all talking in low, earnest voices.”

Text-to-World- What I just read makes me think about Derek Chauvin. I say this because he is currently being accused of killing George Floyd. Most people in this country(including myself) believe he killed Mr.Floyd but the other part of the country is saying something completely different. So, I connect this to a line on page 35 and it reads, “Somebody told me they thought he killed a man once.”

This connection chart is from the beginning of the book. This part of the book was very interesting because we were still learning about all the characters. Ultimately, the characters ended up being worse than we initially thought. 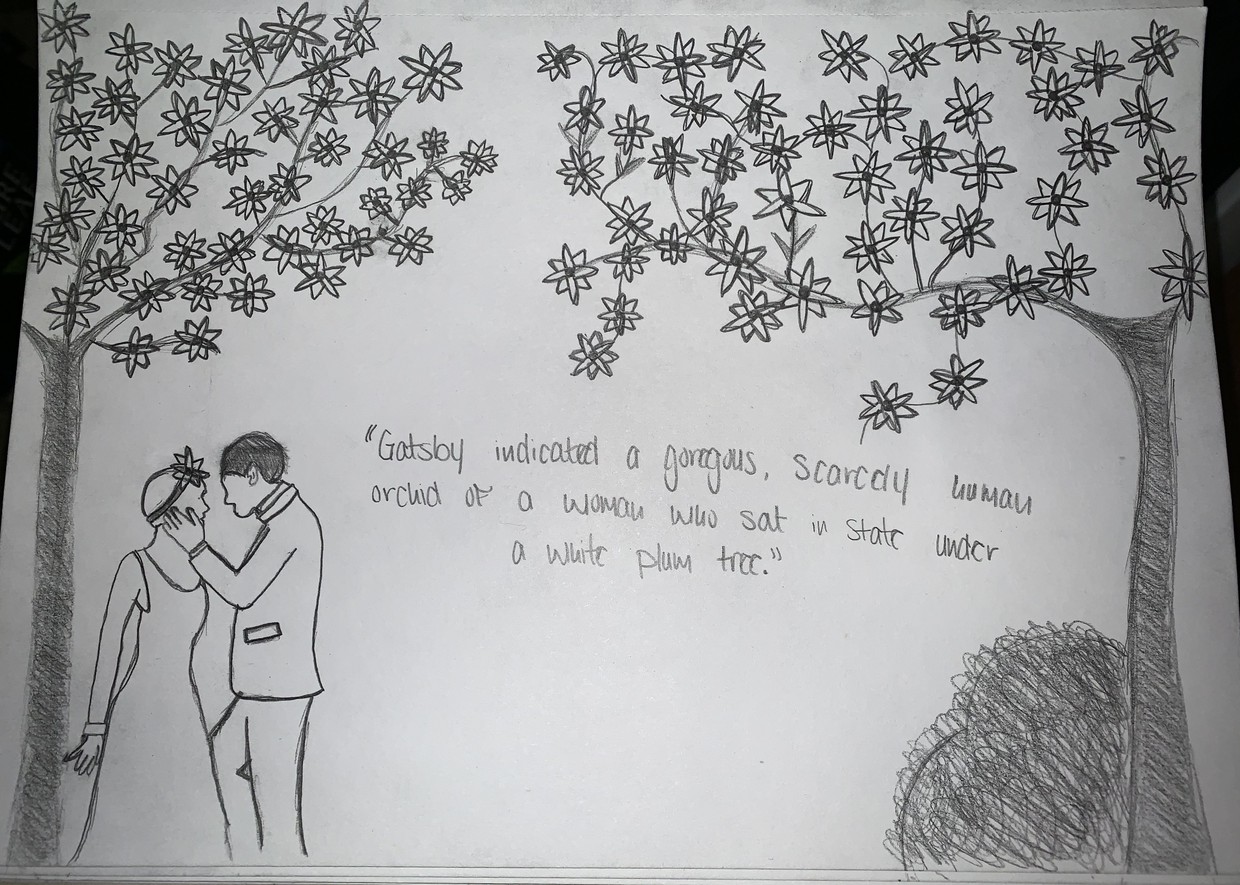 This drawing here is from the latter half of the book(chapters 3-6). I drew this to represent what Gatsby and Daisy had going on during this time. They were becoming closer and closer and they would party with each other and that's where this picture was inspired from.

F.Scott Fitzgerald once said, “The world only exists in your eyes. You can make it as big or as small as you want.” This quote is a bit ironic because in his book “The Great Gatsby”, most of his characters did not abide by this. The main character of the book dedicated his entire life to one woman after they reconnected. This isn't out of the ordinary because, during this time period, money, power, and “love” were the only things that were valued. In retrospect, the more money you had allowed you to do whatever you wanted to do without any repercussions.

This book is pretty much a guide about how you should live your life. The people during this time period, “They were careless people, Tom and Daisy—they smashed up things and creatures and then retreated back into their money or their vast carelessness, or whatever it was that kept them together, and let other people clean up the mess they had made(gatsby 135).” The Great Gatsby accurately describes that people in this era only cared about how much money you had, which has traveled decades down the line to our era. All people care about is how much money they have and how many likes they get on Instagram when they should be worried about getting regular health check ups and paying their bills on time. Everyone wants to show off and be in control and if we're being honest, that's Americas fault. America started wars with other countries because they wanted what they had but they were too incompotenet to make it on their own. When you do things for yourself, you won't have to steal it from someone else.

Famous rapper Lil Kim once said, “first you get the money, then you get the power, then you get the respect.” With regards to “The Great Gatsby”, the more money you have, the more power you have, and with power comes respect. All the main characters had money, slight power, with a dash of respect. Most of all, money was required but only by men. When women had power they often said things like, “Her voice is full of money,(Gatsby 120)” which only proves that men during this time didn't think women could be independent. Which is also why they would say things like, “She’s not leaving me(Gatsby 133)!” The men during this time period were very possessive which is why the women's rights movement started. They wanted to be equal to men, they wanted to vote, and to be able to work just like men did. Eventually women were able to gain power and respect just like men.

Overall, this book is a survival guide on how not to live your life. If you dedicate all of your life to a woman you may end up dead and said woman will skip town with her husband and act like nothing ever happened. Don't waste your time trying to earn/buy your respect. Use your brain and your mind so that you can have the power and respect that you deserve.