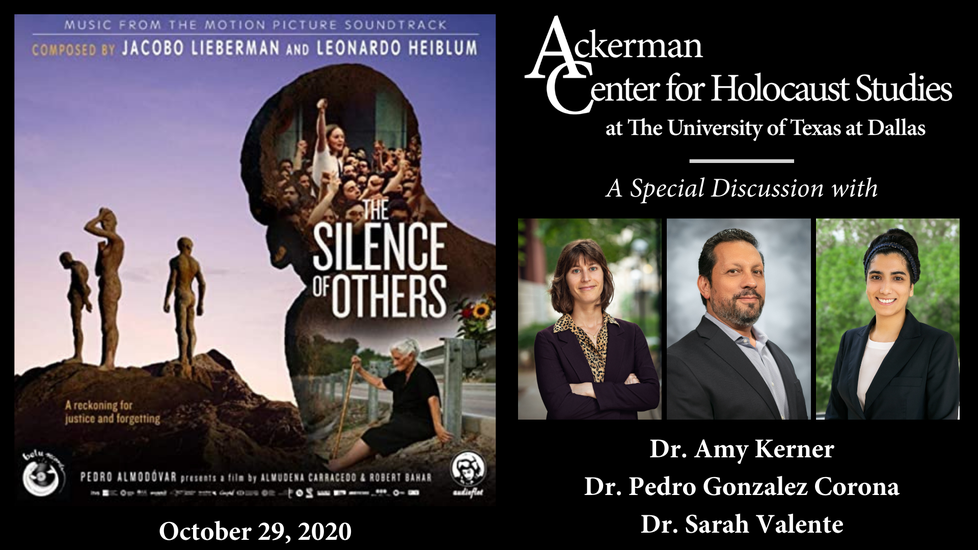 Film Screening Panel Discussion: The Silence of Others

Ackerman Center professors Amy Kerner, Pedro Gonzalez Corona, and Sarah Valente moderated a panel discussion about the documentary film The Silence of Others (2018). This award-winning documentary reveals the struggle for justice by the survivors and victim family members who suffered under the 40-year dictatorship of General Francisco Franco in Spain, a struggle that continues to the present day.

The Secret Lives of Fascism

Dr. Pedro Gonzalez Corona, visiting assistant professor, began the discussion by emphasizing the importance of understanding the historical background to the political situation both prior to and during the Franco regime. Against this chronology, it becomes possible to ascertain a fairly consistent pattern of conservative fascist trends in Spain’s history. Dr. Gonzalez characterized 19th-century Spain as a turbulent period, highlighting several significant historical moments to consider in a broader understanding of fascism in Spain.

One important episode was the “1898 Disaster,” where Spain lost the colonies of Cuba, Puerto Rico, and the Philippines to the United States. This disturbance in global power dynamics was a catalyst to turmoil, creating fertile ground for the emergence of the far-left. Another significant event occurred in July of 1936 when the publicly promoted “cordial” transfer of power to the Franco regime from the monarchy, was actually a coup perpetrated by regime forces.

The “War after the War,” was a transitional period following the end of the Spanish Civil War in 1938. During the conflict, a considerable portion of the population was forced into exile, fleeing either to Mexico or France. When these exiles returned after the war, many were subsequently persecuted for allegedly “republican” ideals, an umbrella term applied to anyone considered as opposing the dictatorship and/or any of its institutions. As dissidents declared enemies of the state they were subject to imprisonment, torture, and execution.

Fellow of the Jacqueline and Michael Wald Professorship in Holocaust Studies, discussed the international legal and juridical aspects of the film. She emphasized the importance of the transnational dynamic to the demand for justice by victims of the Franco regime, as the 2010 lawsuit traveled between Argentina and Spain in the course of the film.

Dr. Kerner highlighted the very recent history of the international legal framework on which the legal case profiled in the film was based. Prior precedents in international criminal prosecution were established at Nuremberg after WWII. In Argentina, the experience of recovering from the so-called “Dirty War” of the 1970s and 1980s had created a framework for legal concepts that were then applied in the case of Spain. Specifically, within the context of the “Dirty War” where 30,000 people were “disappeared” by the government under the guise of eliminating so-called “leftist insurgency” set important legal presidents for legislative and jurisdictional prosecution.

It was not until 2010 that an investigation was opened concerning these crimes committed by the Spanish government, and even more surprising, charges were brought by prosecutors in Argentina, not Spain.

In Spain, survivors and the families of victims seeking justice were met with continuous resistance at every level of government, by officials and figureheads who had no interest in dredging up the past. Dr. Kerner highlighted the importance of grassroots organizations, including victims’ rights groups who publicly advocated bringing the crimes and their perpetrators to justice on an international stage.

The Fight for Memory

Dr. Sarah Valente, visiting assistant professor, discussed how the question of memory is represented in the film. Dr. Valente characterized The Silence of Others as a “fight for memory” in which memory is being verbally attacked by Spanish officials who speak in allusions to uncovering something that is not justifiable, refusing to discuss the subject. This tension between those who have suffered and those who are in power is a continuing struggle that is evident in the film.

Dr. Valente expressed that the question of memory is one that is akin to exile. She called attention to the nature of exile as characterized by these massive numbers of displaced peoples; over half a million during the Spanish Civil War, and somewhere between 1 and 3 million people experienced exile as a result of conflicts of Latin American dictatorships

Dr. Valente emphasized that the film shows the power of collective narrative by those who have suffered under the regime, and at the forefront of this narrative is the importance of witnessing and the need for testimonies in order to even attempt bringing justice or closure to the victims. Highlighting an interesting development in the film is how these collective memories by the people themselves have become a substitute for the justice that they never received.

In case you missed it, the discussion panel recording is available by clicking here. 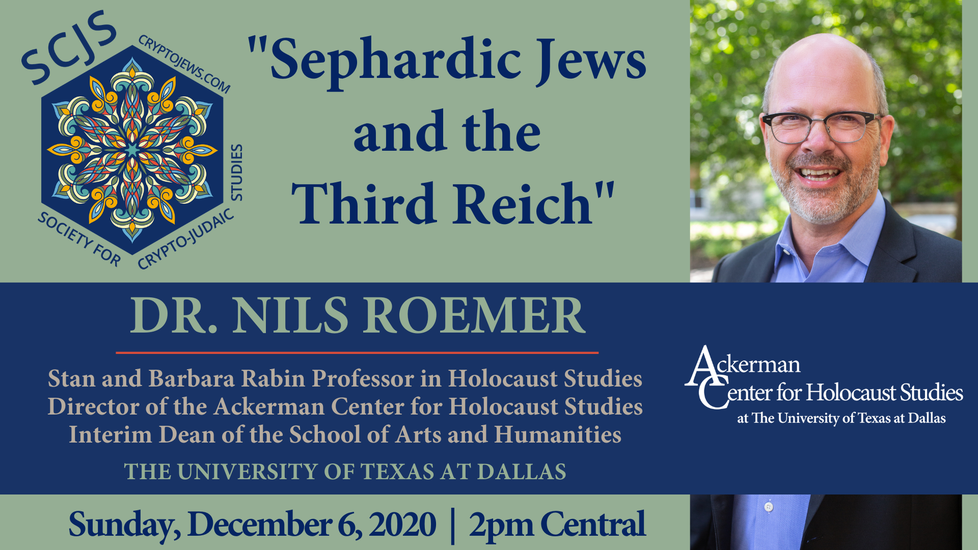 Sephardic Jews and the Third Reich

Dr. Roemer will be presenting a special guest lecture for the Society for Crypto-Judaic Studies.

Register in advance for this meeting by clicking here.