Get email updates from Debbie:

The Lenape on the Wapahani River 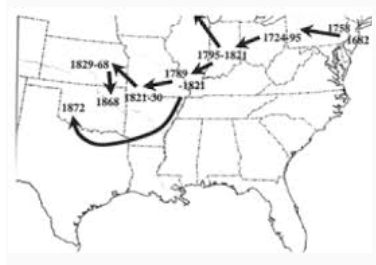 A formal agreement between two groups.

Coming to Indiana by the White River

The Treaty of Greenville had the Natives agree to accept a new boundary line between their territory and that which was to be opened up to the settlers. The treaty gave two-thirds of Ohio and southern Indiana to the United States but left the rest of Indiana to the Lenape and other Natives.

The treaty allowed settlers access to the Ohio Valley and further displaced the Lenape into Central Indiana. Which led to the decision to unite the tribe along the west fork of the White River.

By the time they reached Indiana in the 1790s, the Lenape along the White River had organized politically under six chiefs: three war and three councils. Each chief likely represented one of three Lenape mother descent groups: tookseat (wolf), pokekooungo (turtle), and pullaook (turkey). The six answered to a council of elders known as the Lupwaaeenóáuk. (Loop-wa-een-o-auk). There were by 1800 several Lenape villages located along the west fork of the White River. 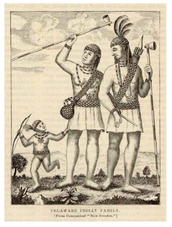 Some of the Lenape lived in large villages of two to three hundred people, but most of them lived in small bands of 25 to 50 people.

Families were important to the Lenape. There were strong ties between parents and children, and among all the related families that made up the clan.

The Lenape had three clans (or phratries) – Wolf, Turtle, and Turkey – which traced their descent through the female line. For example, if a mother belonged to the Turtle Clan, then each of her children also belonged to the same clan. The sons had to marry women from other clans, and their children belonged to their mother’s clan.

Within their own groups, the Lenape were kind to one another. They felt a sense of responsibility towards everyone in their community. They did not steal from anyone in their own village, for there was no reason to do so. The land belonged to the whole community, shelters were shared, and no one hoarded valuable possessions.

The chiefs – sometimes referred to as sachems - were chosen for their behavior, skill in speaking, honesty, and the ability to make wise decisions. The chiefs also had to know about religion so that they could lead the people in rituals and ceremonies.

Name the ways the Lenape tribe were kind to each other. 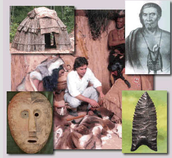 Everyone worked, but men and women were expected to do different tasks.

Starting at an early age, small children began to learn the skills they would need when they grew up. The boys were taught woodcraft and hunting; the girls, housekeeping and gardening.

Women’s Work
Women were responsible for the planting and harvesting of crops and gathering wild foods. Some of the crops were eaten as soon as it was harvested, but much of it - together with wild foods like berries, roots and nuts - were dried for winter use. The women pounded corn into flour by using a mortar and pestle. Nuts could be ground up and baked, or were pressed to squeeze out their oil, which was used in cooking. Maple syrup was made by collecting sap from maple trees in early spring and boiling it down.

Women were skilled at making clay pots, weaving rush mats and bags, and making baskets. They wove cornhusks for slippers, mats and dolls, and made containers from elm and birch bark. With fibers from plants, they spun and braided cords for binding and carrying bundles. Women were also responsible for preparing the hides for clothes and shelters. With bone tools, they scraped the hair from the hides and cleaned them. Then they smoked them over a fire, cut them into pieces and sewed the pieces with bone needles. 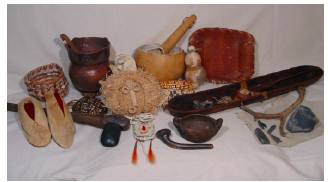 What foods did the Lenape women prepare for winter use?

What are some things that the women also made that were needed by the tribe?

Men cleared the land, built and repaired the houses, and made dugout canoes by felling large trees and alternately burning and chopping through them to the desired shape. They constructed fishweirs and the large fish baskets to gather the catch. Using bows and arrows, the men hunted a variety of animals, although deer, elk and bear were the Lenape’s largest prey. Deer were often hunted by surrounding or herding them into pens or rivers. This method involved many people forming into a large a circle as possible and by using fire or noise to drive the animals to the hunters where they could be easily killed.

Trapping was another means by which the Lenape caught animals like beaver, otter, muskrat, raccoon, mink and wild cats. Turkey, eagle and other birds like partridge, pigeon, wild ducks and geese were also shot or caught in traps to be part of the Lenape diet.

Men were good warriors and sometimes had to go to war to defend their homes, but left the management of the house to their wives and often listened to the advice of the chief matron of his lineage in matters of peace and war.

Why do you think the Lenape settled near the White River in the area that is now Indianapolis?

What do you notice in this picture of a longhouse?

How is this home made?

What is hanging on the poles near this home? 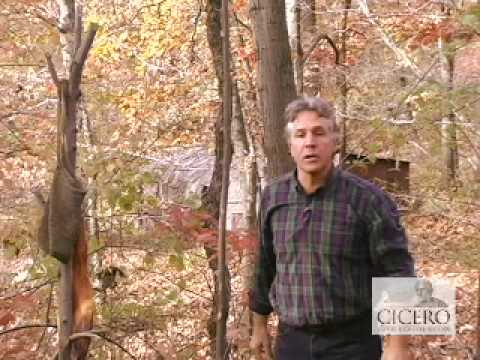 Listening to the elder 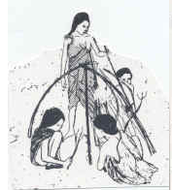 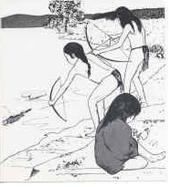 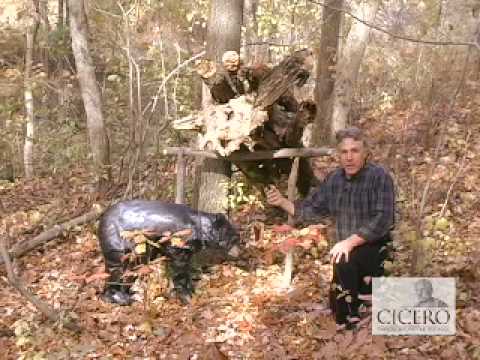 'The Lenape Culture - Hunting' on ViewPure 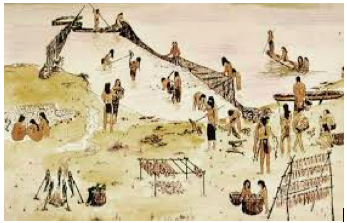 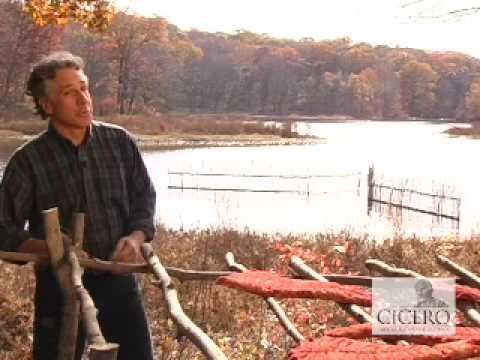 The Lenape believed that certain rituals, such as fasting, gave them special power to influence spirits. It was the custom for boys – and sometimes girls – to mark the time when they became adults by going away alone for many days to fast and dream. The special power they received at this time might enable them to have visions, and some of them might find a guardian spirit. This special guardian could take the form of a fox, a hawk, a small ant or even a rock and could protect the individual for life or tell them what their future would be. 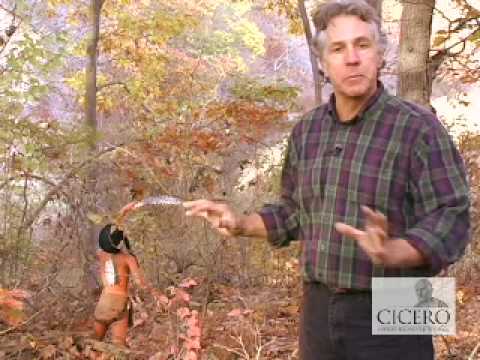 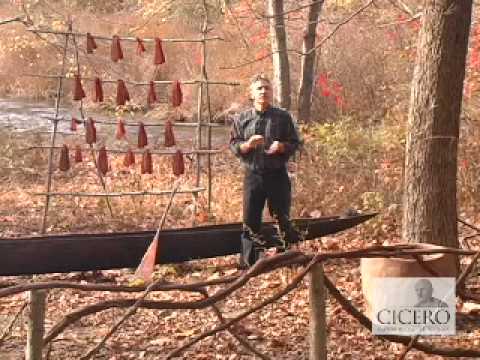 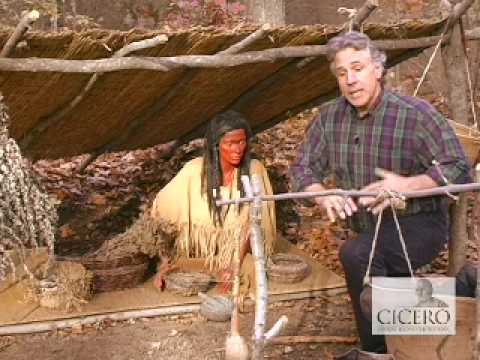 'The Lenape Culture - Medicine' on ViewPure

The Lenape lived only briefly in East Central Indiana. After signing a treaty at Fort St. Mary’s in 1818, they traveled west in 1821. During the 25-year period, several chiefs appear in the histories, oral traditions, and treaties. Chief Hockingpomsga, for instance, lived at his village Owenachki near Priest Ford Road. Other chiefs included the Beaver, Petchekekapon, Lapahnihe, Quenaghtoothmait, James Nanticoke, and Netahopuna

How do you think the Lenape felt about having to leave Indiana when they were only here about 25 years?

Follow Debbie Underwood
Contact Debbie Underwood
Embed code is for website/blog and not email. To embed your newsletter in a Mass Notification System, click HERE to see how or reach out to support@smore.com