Genetics and the Black Death

Studies May Help Us Understand The Evolution of Disease

Genetics and the Black Death

Studies May Help Us Understand The Evolution of Disease 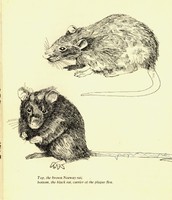 The History Behind the plague

Caused by the bacteria Yersinia pestis, The plague or "Black Death" was the second pandemic to sweep across Europe in the 14th century. It is said to have originated in China, making its way across the continents by the travel of infected fleas on rodent vectors. It is estimated that it wiped out 60% of the European population in its time ("Plague," 2015).

Bubonic- transmitted to humans by a bite from an infected flea. The most recognized throughout history due to the manifestation of characteristic swollen, painful "buboes" ("Plague,"2015)

Pneumonic- attacked the lungs from either untreated bubonic plague or inhalation of infected droplets. ("Plague,"2015)

How Genetics Have Brought Understanding

It turns out that the bacteria causing the plague originally affected the gut; it caused illness in the digestive tract. Through what researchers identify was a single gene mutation, this relatively harmless Yersinia pestis bacteria turned into a deadly one. This suspected gene is the Pla gene. Though through the years there have been many gene mutations, the Pla gene is considered to be the genetic source that allowed this bacteria to evolve into a pathogen able to cause severe respiratory illness. The acquisition of the Pla gene and its later mutations manifested into new and fast emerging strains of the plague. According to Wyndham Lathem of the discovering team, "this information can show how new respiratory pathogens could emerge with only small genetic changes." (as cited in Dallas, 2015). This is because the the eldest form of Y. pestis to still exist causes respiratory disease but, not the deadly kind that swept over Europe centuries ago. Variations in the Pla gene also allowed the bacteria to eventually spread to the lymph nodes known as the bubonic plague (Dallas, 2015).

Did One Gene Mutation Launch the Black Death?

health.usnews.com
Scientists find single change in the plague bacterium's DNA may have changed the course of history

These Genetic Changes Lead to A New Discovery

Strains of the plague causing Y. pestis. were found in the DNA of human remains thousands of years before the black death was evidenced to have affected Europe. However, analyzation of the ancient bacteria has lead researchers to believe that it was still a thousand years before the bacteria evolved into its bubonic form (Preidt, 2015). This information has given scientists the ability to see pathogens before they ever developed into plague causing organisms. This look into the development of ancient pathogens into modern day strains can help our understanding of how genetic mutations can create pathogenic organisms and how the process progresses over thousands of years.

Plague May Have Infected Humans Earlier Than Thought

health.usnews.com
DNA evidence suggests deadly germ was around 4,800 years ago

This new knowledge opens up our understanding of pathogens and their evolutionary history throughout time. One small tweak to genetic material of an organism can propel a mild mannered bacteria into a lethal pandemic causing pathogen (Dallas, 2015). It is insight into how one mutation can create widespread death. Perhaps this could mean that all bacterial organisms have been on earth from the start but, that they have genetically evolved into the disease causing organisms we see today. It could be possible to originate all pathogens to a starting source. This could mean new understanding of how to combat diseases we see today. This could mean we could trace the genetic evolution of a pathogen to its origin giving us vital information on how, when and why these pathogens came to be. I see this as potential to gain true understanding of the diseases we see today. As nurses we may be better equipped to manage disease processes. Imagine knowing how a pathogen mutates and the time it takes for it to do so. That could mean a new way to look at treating these organisms, maybe even reversing them into less lethal forms. The Potential is endless!
By: Aubrey Collopy

*Due to the inability to format correct APA on this media, proper reference page attached*

Follow Aubrey Collopy
Contact Aubrey Collopy
Embed code is for website/blog and not email. To embed your newsletter in a Mass Notification System, click HERE to see how or reach out to support@smore.com
close