Predestination and it's relation to the crucible

Predestination and it's relation to the crucible 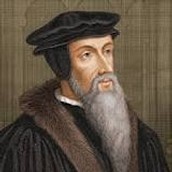 Unconditional election is the belief that, because man is so imperfect, suffering from "Total Hereditary Depravity" (Taylor), none can choose to follow him, rather, God chooses them. This means that the people who will find salvation, as well as those who will not be saved have already been chosen.

Pictured: John Calvin, one of the main advocates of Unconditional Election

How it Relates to the crucible

Since God protects those he has chosen, only people who weren't "of the chosen" could perform witchcraft of be possessed and the controlled. This belief made it easy for the Puritans to persecute those who they believed practiced Witchcraft, because they were "doing God's will" by killing them, and even if they killed the wrong person, since that person was “one of the chosen" they would go to Heaven anyway. This freed the Puritans from any guilt or doubt that what they were doing was right.