Allyson is using Smore newsletters to spread the word online.

Get email updates from Allyson:

Congratulations to our seniors, who are in the homestretch of their academic journey! This is always my favorite time of year, as we roll into Prom, Senior Honors Night, and Graduation. It's exciting to see all our students have accomplished!

As a reminder, the work submission for senior classes is next Friday, May 13, 2021, at 11:59pm. Exams will be given the following week. Students should review each individual teacher's exam schedule and deadlines.

Students in grades K-11 - common work submission deadlines for the second semester of Bobcat Virtual are as follows:

We hope you have a great weekend!

Fill out this form to make an appointment with our counselor, Mr. Hentes.

Asian American and Pacific Islander Heritage Month (AAPI Heritage Month) is an annual celebration that recognizes the historical and cultural contributions of individuals and groups of Asian and Pacific Islander descent to the United States. The AAPI umbrella term includes cultures from the entire Asian continent—including East, Southeast and South Asia—and the Pacific Islands of Melanesia, Micronesia and Polynesia. As of 2019, there were about 22.9 million people of Asian or Pacific Islander descent in the United States. According to the Pew Research Center, AAPI people are a diverse and growing population that make up about 7 percent of the total U.S. population. AAPI Heritage Month 2022 will take place from Sunday, May 1 to Tuesday, May 31.

Asian Americans and Pacific Islanders have contributed significantly to many facets of American culture and society, including science and medicine, literature and art, sports and recreation, government and politics, and activism and law. In 2021, Kamala Harris became the first Asian American Vice President of the United States. In film history, AAPI people, stories, and traditions have become more visible with South Korean director Bong Joon Ho’s Parasite winning the Academy Award for Best Picture in 2019 and the release of Shang-Chi and the Legend of the Ten Rings in 2021, debuting Marvel’s first Asian superhero.

The BVL Elementary teachers would like to invite all of our elementary students to an end of the year picnic at the playground.

Families should bring a picnic lunch, and the teachers will provide a dessert!

A Word from our PTO

Thank you to our amazing PTO for the Teacher Appreciation gifts you left for our BVL teachers this week. I heard many expressions of gratitude throughout the week! 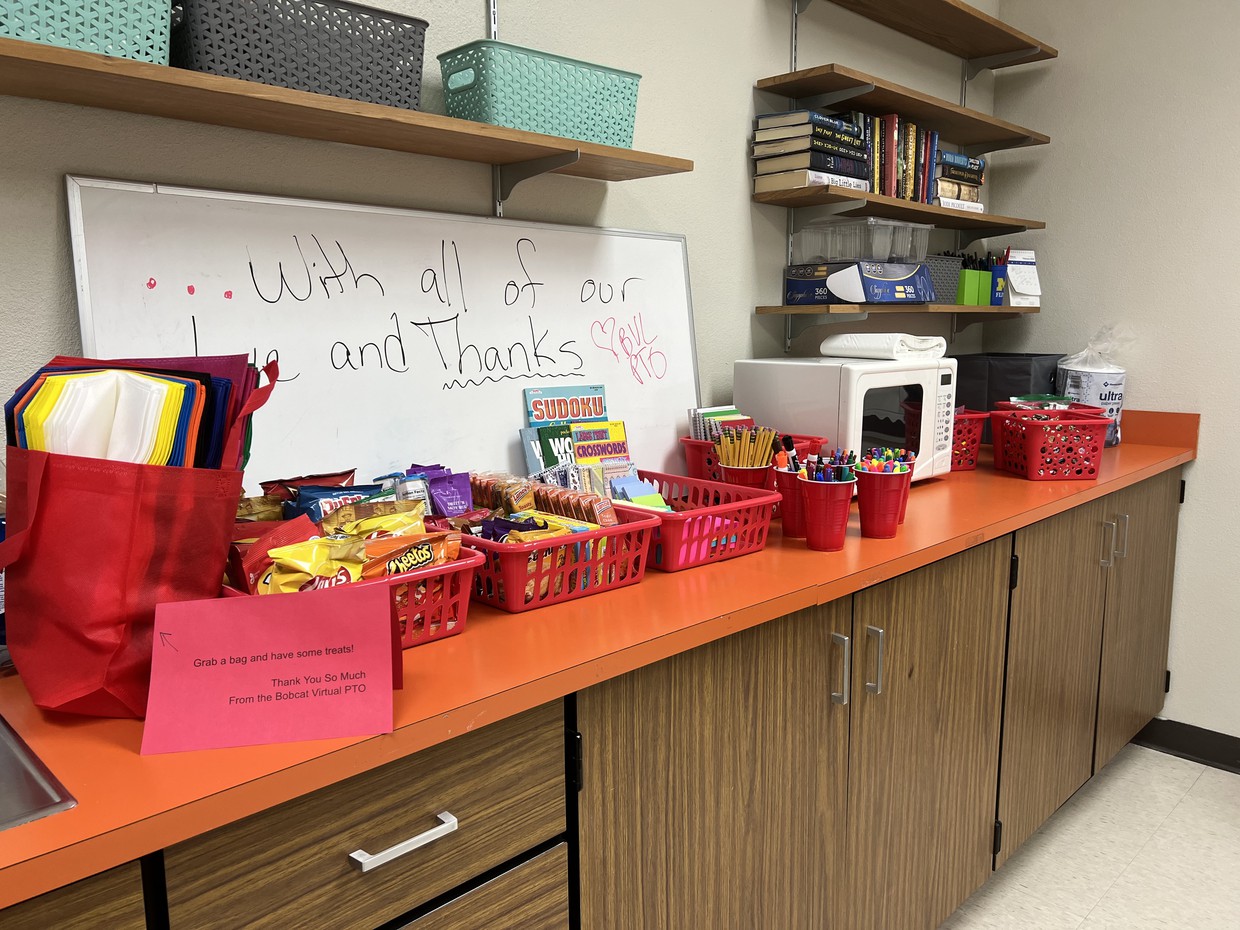 All parents/guardians are invited to attend.

Before the school year ends, make sure that you complete the Grand Blanc Online Registration process. This information must be updated every year before students can start school in the fall. (This is for our GBCS families and does not include our partner school students.)

If you have changed your mind since you initially told us your plans for next year, this is how you will indicate your final placement.

In addition, if you have moved outside the district and would like to stay in GBCS for next year, please complete the District of Choice application by Sunday, July 24.

Given that we are in the beginning stages of our virtual school, we are still determining the best way to honor some of the major milestones of our students. In our district, we would host in-person 5th grade and 8th grade celebrations; however, we know that many of our families prefer the online environment.

We are currently exploring some ideas, but we would like to meet the needs of our families. If you have a 5th or 8th grade student, please take a moment to give us some feedback in this short survey as we plan out how to honor our students this year.

The survey will ask students in grade 5 questions about their experiences at school. Topics covered include perceptions of their engagement, social-emotional learning and diversity. Survey data will be used by your administrators to identify strengths and areas for growth. The survey does not ask questions regarding drug or alcohol use, intimate relationships, political or religious affiliations or other personal information. Because our students are learning in a virtual environment, not all questions may apply.

Students will be asked to complete the survey online using a computer, tablet or mobile device. The anonymous survey is designed to protect students' privacy.

We encourage all 5th grade students to take part in the survey, as we hope to gather a lot of important information on their experiences. Participation is voluntary. Students may skip any question they do not wish to answer. Students may stop participating in the survey at any point without penalty.

If you have a 5th grade student and would like him/her to participate in this survey, here is a link:

If your student has purchased a prom ticket, we have been asked to share the following documents for you to pass along to your student:

If you have any questions about Prom, please direct them to Mrs. Coffman (acoffman@gbcs.org).

If you are a graduating senior who plans to attend Mott Community College in the fall and have a minimum cumulative GPA of 3.0 or higher, please consider applying for the MCC Trustee Scholarship. This scholarship can cover up to 62 credits and fees over the course of two years for a value of over $12,000. Students who apply and are not selected may qualify for an invitation to join the Honors College, which will offer them more opportunities.

Distribution day will be held on Friday, May 13 during all lunches at East Campus.

If you haven't ordered your book, you can do so until May 1 online before the price increases from $85 to $90. This will also ensure that we have a book ready for you on distribution day.

Please check to see if you have ordered a book. A list of books purchased before April 21 is published on the home page of gbyearbook.com.

You can also click on the link to order a book there and you'll be able to pre-order with a credit card.

This year our traditional "post-Grad" party will be a "Pre-Grad" celebration. In order to allow seniors to enjoy the graduation ceremony and spend time with family and friends, we moved the date to Saturday, May 21st after seniors complete their final exams on Friday, May 20th. There are many chair and committee positions open for parents of ALL grades. This is a great way for parents of freshman and sophomores to get involved with your student's class and follow your student through their high school years. 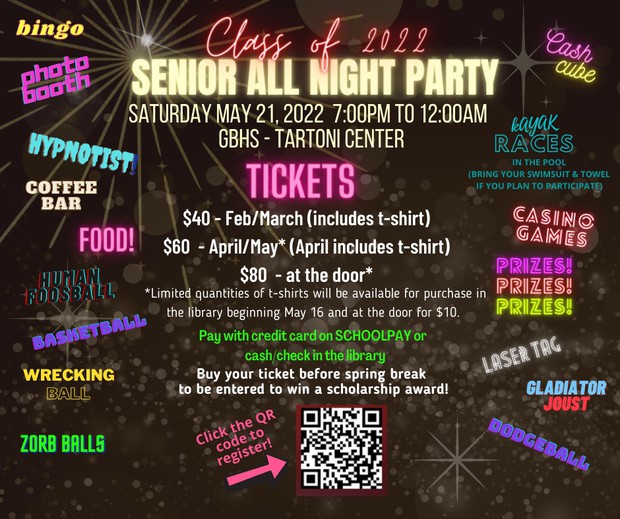 A College Board account is required of all students. If you do not have a College Board account set up, please do so at www.collegeboard.org . The student needs to be the one to set this up. Do not set up a second account. This account is needed for PSAT9, PSAT10, and SAT review, score viewing, and score sending to colleges. Please keep your login and password somewhere where you can find it as needed. These accounts are sometimes used during class time. If you already set up an account and cannot remember your login and password information, please call College Board at 1-866-756-7346. Staff do not have access to students information.

Seniors - Order your Cap and Gown!

If you haven't already, It's time to order everything you need to celebrate and commemorate this Senior Year. This includes cap and gown, graduation announcements, and class apparel.

CLICK HERE for all the important information you need. The EASIEST way to order is click on the link and order online at Jostens.com. Call with any Questions - Jostens of Mid-Michigan 810 658-1700 (office line)

This links you to a Google folder with valuable information regarding senior dates, college planning, financial aid, etc. Make sure to check this folder regularly as new documents and communications will be added throughout the year. 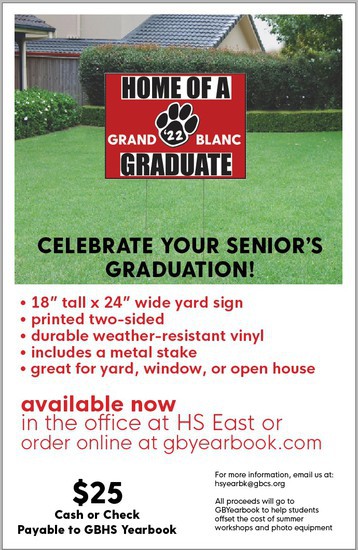 Each week we will profile one of our amazing virtual staff members so that you can meet everyone!

Experience: This is my 20th year of teaching, and I have spent my whole career at GBHS.

Most Excited About: I am excited to hopefully help some students earn college credit with a good score on the AP Exam!

Looking Forward To: Hopefully a return to some normalcy.

Our amazing 6-12 English teacher, Mr. Stuck, has started multiple student clubs for our secondary (grades 6-12) students. All clubs are virtual. Students do not need to worry about coming in to the school.

There is a different club each day of the week:

For a description of each club, please see this newsletter from Mr. Stuck. All secondary students are invited to attend!

Here are some drawings created during Art Club!

If you need something, please don't be afraid to reach out: 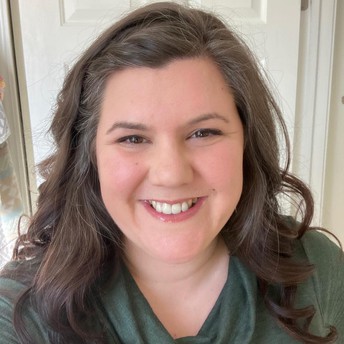 Allyson is using Smore newsletters to spread the word online.

Follow Allyson Walroth
Contact Allyson Walroth
Embed code is for website/blog and not email. To embed your newsletter in a Mass Notification System, click HERE to see how or reach out to support@smore.com
close