johnathan is using Smore newsletters to spread the word online.

Get email updates from johnathan:

Al Capone was born on January 17, 1899. He was the son of Terisina and Gabriel Capone. When he was 14 years old he got in a fight with his teacher and he punched his teacher and he got expelled from his school and never came back.

Al Capone led a life of crime and one day he had his men kidnap George Moran. On St. Valentine's Day there was a shoot out which led to 7 of Moran's men dead. Capone also owed a lot of money in taxes. He had to pay 215,000 in taxes but he did not pay them and was arrested for 22 counts of tax evasion.

At the state prison, Philadelphia's Eastern State Penitentiary, he got arrested in May 1929 for carrying a gun on the trip there. When he was still in prison he got stabbed in the back. On Oct 17, 1931 he was arrested for carrying a concealed weapon and for hiding because everyone was after him for all of the bad he had done.

He was released in November of 1939 and taken to a hospital in Baltimore where he was treated until March of 1940. For his remaining years, Capone slowly deteriorated while staying at his Palm Island estate in Miami. On January 25, 1947, he died of cardiac arrest. 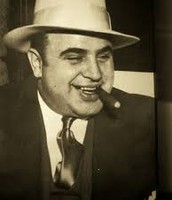 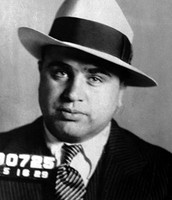 johnathan is using Smore newsletters to spread the word online.