PJ is using Smore newsletters to spread the word online.

Get email updates from PJ: 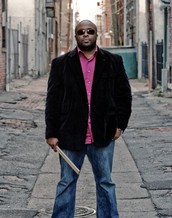 You're invited to an evening of great live music on December 20th at Ona's Music Room as drummer/producer James 'PJ' Spraggins takes the stage for the first and only performance with his band at Ona's this year! Band will consist of Jay Mck on bass, West Byrd on keys, and La'Roy Bodiford on saxophone. Make plans to be there!!

PJ is using Smore newsletters to spread the word online.