Travis is using Smore newsletters to spread the word online.

Get email updates from Travis:

Casimir Pulaski was born March 6th , 1745 . Born in Warsaw , became interested in politics . Casimir Pulaski was a leading military commander for Bar confederation and fought against the Russian domination . Following a recommendation by Benjamin Franklin, Pulaski traveled to North America to help the cause of The American Revolution . He will be remembered as a hero to Poland and the United States for fighting for our freedom and independence . He died October 11th 1779. 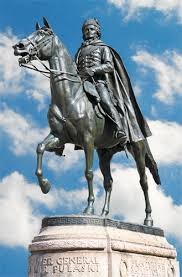 Travis is using Smore newsletters to spread the word online.