Rozlynn is using Smore newsletters to spread the word online.

Get email updates from Rozlynn: 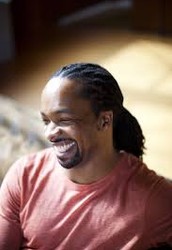 Jericho Brown grew up in Shreveport, Louisiana. His parents were very "church-going" people and believed every child and person should be involved with a church. His family was very religious as he was growing up and he always used to sing in the church choir. His religious background led him to write his most recent book, The new Testament.

Brown now has two books of poetry that he's written. Before his new book, came, Please, which won an American Book Award in 2009 and has gotten a lot of amazing reviews. For this first book he has been called, "A master poet." His second is said to be, "A chronicle of life and death, race and nation, the good and the bad." (http://www.poets.org/poetsorg/poet/jericho-brown)

Along with his books, he has received various awards, taught at many universities, conferences, festivals, and workshops. Today he is currently an assistant professor (of English & Creative Writing) at Emory University in Atlanta Georgia.

~A few of Jericho Brown's Poems~

The Believer - Hustle - a new poem by Jericho Brown

Hustle is about a young man's life in prison. He uses metaphors such as, "His whole family made a barricade of their bodies at the door to room 403" in this poem to express the intensity of what he's really saying. This young boy, only a teenager, sees his family members in prison and realizes now he's there with them. He's seen things he shouldn't have to see being as young as he is. But then at the end in the very last sentence, I realized he was talking about himself. Or that's what i believe. He's trying to express that this is life, not everything is or can be a paradise; and nobody's perfect.

Heart Condition is about racism, loss, and God. It's about long distance relationships and ideals people have; how differently each person thinks. He's proud to be black but to be born in America. He knows each place he comes from has their problems and difficulties. He doesn't try to hide who he is. He talks about how God took his grandmother but they still have a "long distance" relationship through him. Brown says his mother isn't all there from a stroke she went through. It's not fair to him or her and it pains him to see her that way. But when he feels hurt he tries to remember everything slaves went through before him. He realizes everyone has some kind of pain. Physical or emotional. But Brown loves that he has the ability to feel pain even if it hurts. He knows that even if it sounds bad to say, "one pain can ease another." We were all put here to comfort each other and go through things together, not alone, and to overcome and know you're alive.

Summertime is about racism. It tells how kids used to be violent and call black kids names in school. But they never said or did anything back because he/she knew they were better than that. He says in the poem that one day the girl saw kids beating another kid with a belt and she heard him calling out, "Please.." I think he's telling it from a white kids point of view because it says, "Mama said I should be thankful that the town's worse to coloreds than they are to me." I talks about how she hates it where she lives and doesn't believe in God because she thinks he hates her. It says she has an awful sounding voice. I feel like by putting in from a white persons perspective it gets the main point across better than it would the other way around.

Lush Life is about someone who got abused by their dad, so now they go to the bar to drink the pain away. They go to hear the woman on stage sing but the music reminds them of their past. It says how the word, "bitch", could be considered a compliment because they don't know anything else. The ones who are supposed to love them call them that and they just take it because it's as close as they can get to, "I love you." A broken home lead to a horrible addiction, and all they want every night is to hear the lady at bar sing.

Rozlynn is using Smore newsletters to spread the word online.