Audie is using Smore newsletters to spread the word online.

Get email updates from Audie: 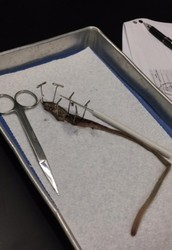 The earthworm (of the kingdom Animalia, phylum Annelida, class Clitella, order Haplotaxida, family Lambricicdae, genus Lumbricus, and species Terrestris), is a segmented decomposer found all over the globe. The earthworm thrives in moist soil, which is why you can find lots of earthworms near freshwater.

The earthworm, a hermaphrodite, is characterized by its segmented body and fluid-filled coelom. Though it lacks a skeleton, the coelom chambers maintain its structure.

The earthworm is a decomposer and thus feeds on organic matter that's found in the soil. The earthworm also eats protozoans, bacteria, and fungi. Many organisms (birds, beetles, snakes, toads, moles, and centipedes) feed on the earthworm.

Ends of the Earthworm Dissection...

The lab should expose the external and internal structure of the organism. Students should develop a deeper understanding for the digestive system of the earthworm as well. 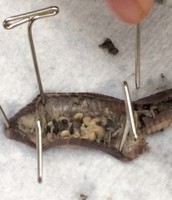 Internal features of the split earthworm.

A labeled cutaway of the earthworm.

Labeled external features of the earthworm.

The earthworm's digestive system consists of five organs: the pharynx, esophagus, crop, gizzard, and intestine. The digestive process's start is marked by food being swallowed through the pharynx. The food is then passed through the esophagus, which filters any unnecessary elements. The food is then stored in the crop before moving on to the gizzard. The worm had previously consumed small rocks so that it could grind the food inside of its gizzard. The food is then moved to the intestine as fluids are released to help digest the food. The digested food is finally absorbed into the blood!

The mouth- the opening of the earthworm that takes in food

The pharynx- an organ that lubricates food

The intestine- the organ that transports the nutrients through the entire system. this organ contains bacteria that helps break down food and release essential proteins and minerals

The earthworm plays a vital role in decomposing (breaking down dead matter). When an earthworm decomposes material, all of the nutrients in the material are released. Earthworms also mix soil layers and put organic matter into the soil. Many people use earthworms as biodegradable bait!

Audie is using Smore newsletters to spread the word online.

Follow Audie Choi
Contact Audie Choi
Embed code is for website/blog and not email. To embed your newsletter in a Mass Notification System, click HERE to see how or reach out to support@smore.com
close