The perch, or Perca flavescens, lives in freshwater environments of North America. Perch spawn around springtime. Their gills allow them to breathe underwater while their assorted fins allow them to move up, down, left, and right. Their specialized swim bladder enables them to float in water by providing buoyancy. Its predators are the walleye and largemouth bass. Their prey are zooplankton and mosquitoes. Perch belong to the third trophic level. Humans use perch as stock for many lakes and ponds. They help remove pests such as mosquitoes. We also fish perch and eat a variety of them (not commercially, however). 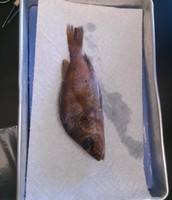 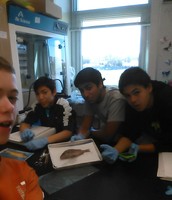 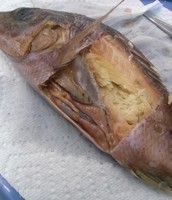 External Anatomy of the perch

Internal Anatomy of the perch 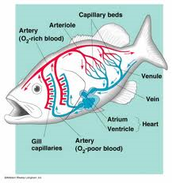 The circulatory system of the perch is a low-pressure, single loop, closed system. Deoxygenated blood is pumped from the two-chambered heart to the gills, where the blood becomes oxygenated. From there, the blood goes to the rest of the body, returning to the heart.

Yellow perch are only found in North American fresh water habitats, living in moderate temperatures. Perch only spawn in 45-55 degrees Fahrenheit. The world record for the largest yellow perch was only 4 pounds and 3 ounces. Perch do not build nests. Perch have somewhat spiny fins, using them as a sort of defense mechanism from predators. Finally, perch are striped, camouflaging them in cloudy water. 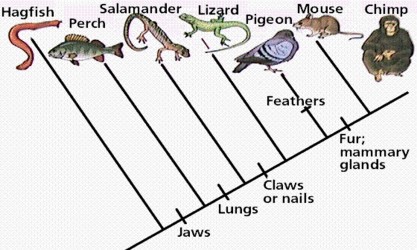