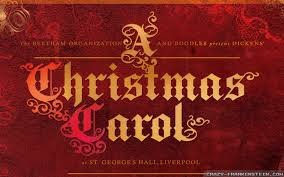 Stave 1 of the Christmas Carol

In this Stave, you will meet these people:

Jacob Marley- Scrooges' old, greedy business partner who is died and here to save Scrooge's life

In this Stave, you learn a lot about Scrooge. You learn that Scrooge hates Christmas. He hates refuse to in Fred's Christmas cheer. Scrooge also refuses to donation to the men coming because he thinks that the poor people need to go to a workhouse or jail. Then the ghost of Jacob Marley warns Scrooge is going to be visited by three ghost. The first at one o'clock, the second the next day at one o'clock and the final ghost the day after at one o'clock.

Stave 2 of the Christmas Carol

In this Stave, you will meet:

The Ghost of Christmas Past- a combination of a small child and an old woman with a candle light for a head and holding a candle snuffer.

Fezziwig- a Jolly, old, big businessmen that Scrooge worked for.

The Ghost of Christmas Past toke Scrooge to his old boarding school with all the kids gone, but a little boy read a book alone. These memories made Scrooge cry. More Christmas go by and Scrooge is still at the boarding school alone. Then one day this little sister comes in and say, "You can come home now, dad has gotten a lot better." They then go to a party that Fezziwig is hosting. Scrooge then sees a girl, Belle, that Scrooge was going to engage, but she broke it off. Later the ghost shows Scrooge, Belle and her husband talking about Scrooge. Scrooge begs the ghost to stop showing him, his past. Scrooge then puts the ghost light out and finds himself back in his room.

Stave 3 of the Christmas Carol

The Ghost of Christmas Present- A hale and majestic giant guy who show Scrooge how other spend their Christmas.

Stave 4 of the Christmas Carol

You will then meet:

The Ghost of Christmas Yet to Come- a phantom, dark, spooky wearing a black robe.

Stave 5 of the Christmas Carol

Scrooge gets up and finds out that it is Christmas Day and is so excited because the ghost all came in one night so Scrooge didn't miss Christmas. Scrooge goes and buys the prize turkey and sends it to the Cratchits. Scrooge goes to Fred's party and the guest are shocked with Scrooges new behavior. The next morning Bob show up late for work and Scrooge gives him a raise. Scrooge became a second father to Tiny Tim. The moral of the story is that don't be a Scrooge during the holiday season.