jodie is using Smore newsletters to spread the word online.

Get email updates from jodie:

Life in the Australian Goldfields

Life in the Australian Goldfields

Life on the gold fields.

Life on the goldfields was hardly a glamorous life. While thousands of people wanted a quick find of gold and instant wealth a lot of them left empty handed, sick and disillusioned. The diggers didn't have any comfortable bedding they slept with any materials that they could find. Diggers lived in constructed canvas tents made from hessian sacking, trees, string, rope anything to keep them warm from the winter months. They also built fire places out of mud and stones near the wall of their hut. Logs and stones were often used as tables and chairs.

Martha Glendinning and her sister decided to set up a little stall and supply the diggers with such things as torches, towels, blankets, bottled fruits, jam and honey. As a lot of diggers were short with money they would swap or barter in exchange for food, tobacco, soap for example. Even shop owners would exchange small necessities if they didn't have enough change.

The day to day life on the fields brought people from all parts of the globe. Anyone from doctors, farmers and ex-convicts were out alongside each other on the goldfields. Alcohol became increasingly common as diggers sought to drown their disappointments. They drank rum, whisky and other spirits. Diggers that were unable to afford those types of alcohol made a concoction known as grog. Life on the goldfields offered labour, dirt, dust, flies, dysentery (disease), liquor and all different types of weather. Some diggers turned to their religious faith instead of alcohol.

Women on the goldfields.

Life for women on the goldfields was very harsh, one of the hardest things was loneliness. Women would frequently spend most of their time alone and have to face a number of dangers which included snakes, illness and assault. Women spend most of their time doing the washing, cleaning, hanging the clothes and once they are dry they pack them away into the correct suit case or drawers. While the men were at the fields the women would be making their dinner/supper. Many women experienced pregnancy and childbirth either alone or with the other women's support as there was no medical support systems in place at the time. Some women joined in the diggings with their husbands other's made a name for themselves as entertainers. Such as dancers or singers. All to entertain the miners. 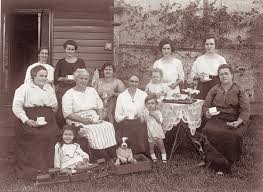 Chinese on the goldfields

The Chinese miners who came to Australia to find gold did not intent to stay. Many had been sent by the wealthy Chinese. It is believed about 7000 Chinese worked in the Araluen goldfields in Southern NSW.

With the news of the very rich gold finds in Victoria echoing around the world in 1852, a new wave of Chinese emigrants began arriving in Melbourne from the start of 1853. Unlike the original labourers who came out on their own, the Chinese miners were organised into groups of between 30 to 100 men under the directions of a leader. This organised labour force made them very effective at finding gold. Calls increasingly went out to expel them from the diggings.

Chinese used different methods of mining to the European miners. They would create round mineshaft's because they thought evil spirits lurked in corners. These round shaft would benefit to produce greater rewards. The Chinese miners would take over the European miners claims that were abandon by them and often found success.

In 1861 the Lambing Flat riots begun between the Chinese and the European miners with American miners. Large groups armed with picks, whips, sticks and knives converged in a rowdy crowd called a "roll up". The European and American miners marched upon the Chinese diggings to drive them away for good. This went for several weeks. Many Chinese miners were beaten and severely injured. Some were buried alive in their mines shafts if they tried to hide the gold.

When military intervened order was restored and ringleaders were arrested and tried. But only one person was convicted and jailed. 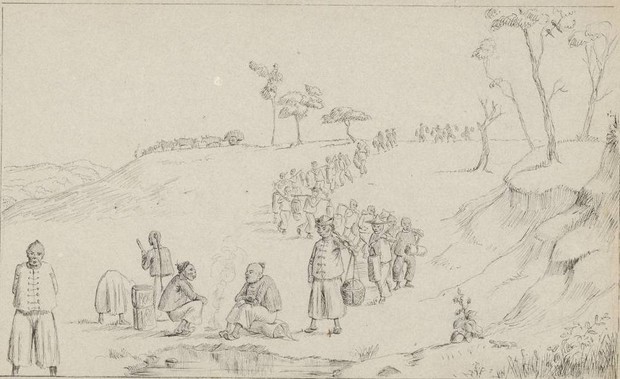 Gold panning is a method of gold mining. Panning is by far the most popular way of mining on the goldfields. A gold pan is a metal dish and you hold it with two hands at the back and you scrap it along the floor of the water, then bring it up and sift the rocks and sand around until it runs out or you find gold.

Cradling is another water-based method it is more complex then panning. Edward Hargraves introduced this method. Cradling involved a wooden box with a handle on one side and a ridged bottom covered with hessian cloth. This was more successful than panning because you could look at bigger amount of gravel and dirt.

Dry blowing is a different method of mining. You get two pans and sit one of them on the ground and tip the top pan on a slit angel and let the wind do the job. While the method was sound in theory, the winds meant that tiny particles of gold could be blown away with the rest of the dust and dirt.

Shaft mining where miners dug a shaft up to 50 metres deep with a pick and a shovel, this was long and tiring. They only did this if they new there would be gold.

Puddling a simple method involving the separation of gold from clay. Small amounts of clay/gold mixture was put into large containers and then filled with water. It was then stirred with a paddle or wooden stake, the clay would dissolve and gold would sink to the bottom of the container. Not much gold was found this particular way.

Dredging used a huge bucket at the front of the dredge and would scoop up large amounts of sediment from the river bed. This would then be sifted and sorted. They could go threw more material.

jodie is using Smore newsletters to spread the word online.