Niamh is using Smore newsletters to spread the word online.

Get email updates from Niamh:

Alan Turing was a genius code breaker and Mathematician most famous for breaking the German Enigma code.

Alan Turing was born June 23rd, 1912 in Maida Vale, London. He went to university at Kings College University, Cambridge from 1931 and then taught there afterwards.He went to Princeton University in 1936, returning in 1938. He began to work part-time at the Government Code and Cypher School in 1939. 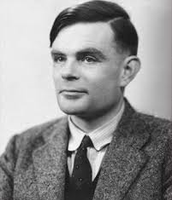 Turing took up full-time work at the Government Code and Cypher school headquarters in Bletchley Park. There, he played a vital role in decoding the messages made by the German Enigma machine, which provided vital information for the English. He took the lead in a team that designed a machine known as a bombe that successfully decoded German messages. "We can only see a short distance ahead, but we can see plenty there that needs to be done."

In 1952, Turing was arrested and tried for being gay, then a criminal offence. To avoid prison, he accepted injections for a year that stopped him having those thoughts. In that era, homosexuals were considered a security risk. Because of this, he lost his job as a code breaker. He committed suicide on June the 7th, 1954 by eating an apple coated in cyanide. He was only 41 years old.

Alan Turing, the British mathematical genius and codebreaker born 100 years ago on 23 June, may not have committed suicide, as is widely believed. Turing expert Prof Jack Copeland believes the evidence would not today be accepted as valid to decide how he died. Indeed, he argues, Turing's death may equally probably have been an accident. What is well known and accepted is that Alan Turing died of cyanide poisoning. His housekeeper famously found the 41-year-old mathematician dead in his bed, with a half-eaten apple on his bedside table.

It is widely said that Turing had been haunted by the story of the poisoned apple in the fairy tale of Snow White and the Seven Dwarfs, and had resorted to the same desperate measure to end the persecution he was suffering as a result of his homosexuality. But according to Prof Copeland, it was Turing's habit to take an apple at bedtime, and that it was quite usual for him not to finish it; the half-eaten remains found near his body cannot be seen as an indication of a deliberate act. Indeed, the police never tested the apple for the presence of cyanide.

Niamh is using Smore newsletters to spread the word online.