Get email updates from Gracie:

Prepare to have your mind blown!

Prepare to have your mind blown!

DNA is located in the cell's nucleus. DNA is made of chemical building blocks called nucleotides. In these nucleotides there are three parts: a phosphate group, a sugar group, and one of the four nitrogen bases. The four types of nitrogen bases are an Adenine, Thymine, Cytosine, and a Guanine. DNA is a double helix shape that is formed by base pairs attached to a sugar-phosphate backbone.

This picture is describing a visual image about what the shape of DNA looks like. This shows the double helix shape of DNA. 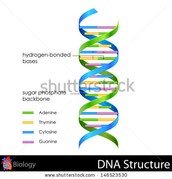 This is a description of a DNA structure, and what it contains. 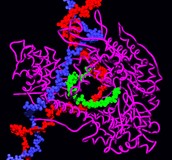 This is an image of a RNA polymerase, and what it contains.

DNA contains the instructions needed for an organism to develop, survive, and reproduce. To carry out these functions, DNA must be converted into messages that can be used to produce proteins. Heredity is the passing of traits to offspring from its parents. A type of heredity is your genes. Heredity is the process by which an offspring cell or organism becomes predisposed to the characteristics of its parent cell or organism. Replication is is the process of producing two identical replicas from one original DNA molecule. This produces in all living organisms. Protein production is the information that most genes contain to made proteins. RNA is a nucleic acid, also known as ribonucleic acid, that is present in all living cells. The types of RNA are mRNA, rRNA, and tRNA. RNA's role is to act as a messenger carrying instructions to DNA, for controlling the synthesis of proteins.
DNA Structure