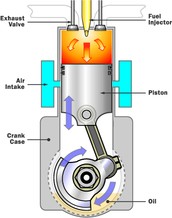 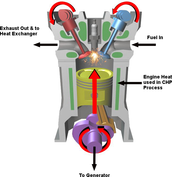 In an internal combustion engine, the ignition and the combustion of the fuel occurs in the engine itself. The engine consists of a fixed cylinder and a moving piston. The expanding combustion gases push the piston, which in turn rotates the crankshaft and ultimately, through a system of gears in the powertrain, drives the vehicle’s wheels. In 1859 it was initially powered by gas and air, which made it impractical for public use. However, once petroleum was introduced as a fuel source, it became for efficient, and a little cheaper, ensuring that the engine was on its way to being able to be used by the average citizen.

The first person to experiment with an internal combustion engine was the Dutch physicist Christian Huygens in about 1680. However, it was only in 1859 when the French engineer J.J. Etienne Lenoir produced a spark-ignition engine that was double-acting and could be operated continuously. In 1862, Alphonse Beau de Rochas, a French scientist, patented a four stroke engine known as the “Otto cycle”. The first two-stroke engine was completed in 1862 as well by Sir Douglas Clerk, while George Brayton developed a two-stroke kerosine engine that was too large to be commercially successful. Sir Douglas Clerk’s version of the two-stroke engine is still used today.

Gottlieb Daimler made the prototype of the modern gas engine in 1885. It injected carburetor and used that gasoline to power machines. In 1889, Daimler introduced a four-stroke engine with two cylinders hanging in a V and mushroom-shaped valves with a much higher power-to-weight ratio. Many modern gas engines are descended from this.