Humpback Whales are known for their magical songs and noises. They are powerful swimmers and they use their massive tail fin, called a fluke, to propel themselves through the water. Sometimes they use is it to jump all the way out of the water. Sadly, this species is endangered. 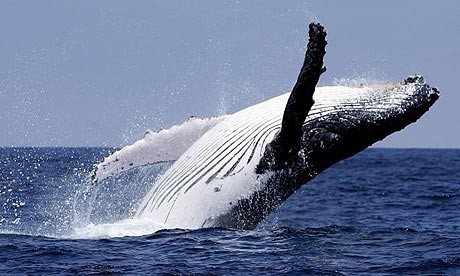 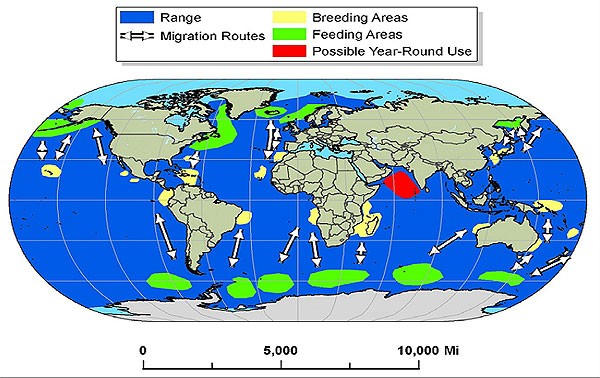 Where is the humpback whale found?

Humpback whales are found along coastlines but are found anywhere from polar to tropical waters. They are found in basically all areas including the coasts of South-East Alaska, Prince William Sound, and British Columbia, Hawaii, the Gulf of California, Mexico and Costa Rica, northern Marianas, Taiwan (China), Japan, the Philippines, Korea, Iceland, southern Greenland, Norway, Svalbard and the eastern seaboard of Canada, the United States, the Caribbean and south from the southern Bahamas to Grenada, the Grenadines and Venezuela.

Why is it endangered?

Humpback whales are endangered due to commerical whaling. This is when whales are hunted and killed for their oil, meat, and whalebone. This starting in the early 18th century and continued into the 19th and 20th century. In 1970, the humpback whale was one of the first species to be protected by the Endangered Species Act. At the time the population was very low with only about 5,000 but has now bounced back to about 80,000. People are now questioning if the humpback whale should be removed from the Endangered Species List.

Why is the Humpback Whale ecologically important?

Whales are very important to an ecosystem. They regulate the food chain and make sure that certain species aren't overpopulating the ocean. Overpopulation destroys other species and so whales keep a balance in the ecosystem. Whale poop also offsets the carbon in the atmosphere. Whales also recycle nutrients and enhance primary productivity.

Why is the Humpback Whale economically important?

Humpback whales are of high interest to tourist and there are many whale watching tours around the world. Some economies rely heavily on whale watching and other spectator activities to bring in capital through tourism. Whales are can also be hunted by their oil and meat, which is very valuable. However, whaling is what got them endangered.