Our Perspective of War

Our perspective of war is that it is a bad thing when not necessary. War should only be necessary when our allies need help and or our country is being threatened. War is killing our innocent people and also innocent people on the enemy's side are dying as well. War is also putting our country and the American public in lots of debt.

Q1: Scranton argues that " A lot of us are very uncomfortable with having conversations about way because we're worried that we disagree," What is she implying about the effect of war on the American public?

A1: Scranton is implying that the American public does not want to have a conversation on the topic of war because some are to scared to talk about or some think they will have everything wrong about the subject.

Q 2: WHY WOULD SCRANTON USE HANDHELD FOOTAGE FROM ACTIVE MILITARY?

A2: Scranton used the handheld footage of active military to show what is really going on in the war now , rather than whats showed in the movies, and what the active soldiers are going through in the war.

Q 3: IN HER REVIEW OF "THE WAR TAPES," POST WRITER ANN HORNADAY ASKED: " IS IT TO MUCH TO ASK THAT 'THE WAR TAPES,' A RIVETING, AUDACIOUS NEW DOCUMENTARY ABOUT THE IRAQ WAR, BE REQUIRED VIEWING IN EVERY CLASSROOM AND LIVING ROOM IN AMERICA? OR AT LEAST THE OVAL OFFICE?" WHY IS THE FILM IMPORTANT TO OUR UNIT?

A3: This film is important to our unit because it shows us the truth and gives us a primary source of what active military in war is like today.

One quote/situation from "the war tapes"

The quote by Zack Bazzi, "Every time you hear a boom, somebody is going to heaven." connects the literature we read by explaining how deadly war actually is and how at every second of the day in active war someone is dying or getting hurt.

Review agreement or disagreement on "the war tapes"

One reviewers comment : "A film of rare honesty and power that exposes, from the eyes of those who fight the war, the revolting and soul-numbing world of combat." - Chris Hedges

1. We agree with this comment because "The War Tapes," does show the full honesty of war its self. and what the soldiers have to go through.

Second reviewers comment: "The single best document (book, film or article) you could see on the war in Iraq" -John Fisher Burns

The press notes are important because they talk about how the documentary was filmed but how also it explain how this film brought a lot of people together.

The quote was revealed in the film by showing us the actual active footage of real active soldiers and active war other than when your read something you can only image what is really going on. It impacts American's social impact and voice by showing what is actually going on in war and what it looks like.

patriotism : what is it? how does it differ among us?

Patriotism is love and devotion to one's country. Everyone has different views on patriotism. Some people are less patriotic then others or some are more. It all depends on the persons personal feelings of there country.

Below are three examples of Patriotism. 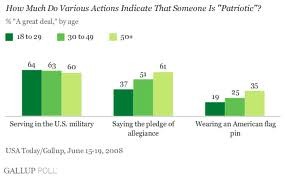 One similarity is In the story Tim O'brain point of a true war story is something so disturbing you can not continue to read or look at. The same in the "The War Tapes"

One difference is in the story you never really know what is true or not. But, in the film you see the truth in the actual footage.