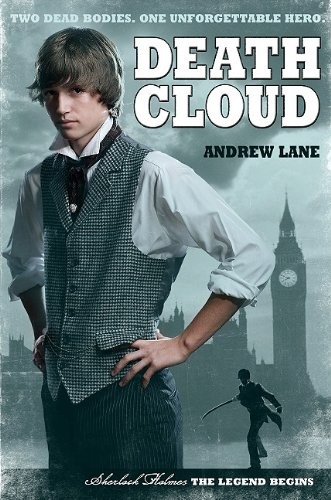 After a few days of holidays Sherlock has discovered his brother My croft has hired an unusual tutor named Amyus Crowe. During there first lesson Amyus and Sherlock find a dead body on the Holmes estate and witnesses the same cloud with Matty (Sherlocks friend)

With Matty's help he tracks down a warehouse which has links to one of the deceased and almost dies in the warehouse when the villains set it alight. Holmes escapes the building, and determines that he must travel to Guildford and locate an expert in exotic diseases who might help identify the yellow substance. He, therefore, sets out with Matty on his barge to Guildford, and although they are attacked along the way by the villains, they nevertheless make it to his destination and discovers that the yellow substance is bee pollen. On returning home he visits his tutor's home, where he meets Crowe's daughter Virginia.

A few days later Sherlock is lured to a fair, where he is forced to participate in a boxing match, from which he is kidnapped and interrogated by the unseen Baron Maupertuis until he is rescued by Matty, and the pair go to his tutor's home. Knowing that the Baron has left his headquarters, Sherlock, Matty, Amyus Crowe and Virginia determine to follow and locate the Baron.

They discover that the Baron is shipping a weapon from a London wharf, and after a series of chases, Sherlock and Virginia are kidnapped to France by the Baron, and further interrogated. The Baron attacks Sherlock as Mr. Surd attacks Virginia. The pair escape and meet up with Crowe and Matty and set out to stop the Baron from trying to destroy the British Army. They find a fort, where Mr. Surd is in. Sherlock engages in a fight with Mr. Surd, and Sherlock kills him by shoving him into a beehive, resulting in multiple stings from angry bees. They throw pollen in the air, and burn it. The fort falls down.

Sherlock wakes up. He meets Crowe and Matty and they discuss a few things. He glances outside the window and sees a man in a carriage, presumably the Baron.t Matty (one of Sherlock's friends) and Sherlock had encountered previously.

A brilliant 14 year old who is somewhat lonely but longs for friendship. He is attending Deepdene School for Boys (boarding school) and because of his father's sudden orders to ship off to India, he is required to stay with his aunt and uncle in Farnham. When he starts his holiday, he is a curious slightly naive young man, but through the series of events that occur in the book Holmes matures and is changed profoundly, he has faced death, found love and defeated true evil. In terms of his relationships, he idolises his older brother Mycroft, he likes Matty who becomes his new sidekick, has developed confused feelings for Virginia, and is intrigued by the mysterious astute Crowe.

Sherlock's older brother, works for the government in London.

He has no mother or father and lives by his wits, finding or stealing food where he can and travelling along the English canals in his barge. He is fascinated by Sherlock and a true friendship ended up being formed. Also lives in the center of town

An American hunter and tracker who is a highly unusual tutor preferring to focus on practical learning. He is described as a large man with white hair and a large beard. He is doing undercover work in Britain tracking down American Civil War babies.

Amyus Crowe's daughter, unhappy with England because of a negative experience she and her father experienced on the way to the United Kingdom, is a free-spirited, outspoken girl. She is described to be a red-haired lass with violet eyes, tanned skin, and freckles. She is an excellent horseback rider.

Mrs. Eglantine is the housekeeper of Holmes Manor; she is slightly sinister and does not welcome new guests. Mycroft Holmes told Sherlock in a letter, that she is "no friend to the Holmes family".

The Baron is the mastermind behind the mystery of the Death Cloud.

Climax: When Sherlock finds out that the yellow powdery substance is Bee Pollen.

Falling action: When they get captured by the Baron Maupertuis.

Resolution: When they destroy the British Army.