Louis's rise as a kid

"Louis Armstrong was born on 4 July, 1900 in New Orleans, Louisiana. Because of poor record keeping. Growing up in New Orleans. When Louis was still quite young his parents separated and he saw very little of his father during his childhood. He spent several years with his grandmother, Josephine Armstrong, and then moved back home with his mother. They lived in a poor neighborhood in New Orleans that was filled with crime, prostitutes, and drunks. Despite these negative influences, Armstrong was able to stay out of trouble most of the time."

"Louis' biggest trouble with the law occurred when he was approximately thirteen years old. He and some friends were celebrating New Year's Eve on the streets of New Orleans. Louis took his stepfather's pistol and shot blanks in the air to celebrate. He was arrested for discharging a weapon in the city and sent to the Colored Waifs' Home for a year and a half.This downfall would prove to be the beginning of Armstrong's life as a musician. It was in the Waif house that Louis learned to play music. As a reward for good behavior the children were allowed to play in the houses band. It was directed by two amateur musicians, the director of the home, "Captain" Joseph, and warden, Peter.

Armstrong was very prolific during these years. Between 1925 and 1928 he recorded more than sixty titles with his own bands, as well as many more with Johnny Dodds, Lil's Hot Shots, Erskine Tate, Carroll Dickerson and various blues artists. 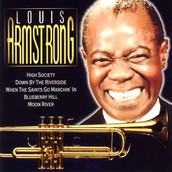 what a wonderful world

"What a Wonderful World" is a song written by Bob Thiele (as "George Douglas") and George David Wiess It was first recorded by Louis Armstrong and released as a single in 1967. 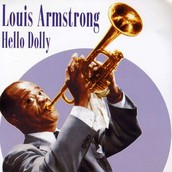 The 1964 Broadway musical Hello, Dolly! was based on Thornton Wilder's 1955 play The Matchmaker, which, in turn, had been based on earlier sources. The score was written by 30-year-old Jerry Herman.

In this recording, unlike the other two, Armstrong does no singing; it's a pure instrumental. Armstrong and Johnson once again stimulate each other with cornet-guitar exchanges and create a song that builds and flows and produces a coherent work of musical art.
What a wonderful world - LOUIS ARMSTRONG.