Nikol is using Smore newsletters to spread the word online.

Get email updates from Nikol:

Where We Are Today

Where We Are Today

Under Financial Hardship, the plan for the modernization project was to modernize the main building into three larger classrooms (intended to house K, 1, 2) as well as house administration offices (secretary office and principal office).

The new construction project included a multipurpose building that would include a modern cafeteria as well as a space to play basketball and other indoor sports. Additionally, the plans included six new classrooms.

Unfortunately, the state funding was exhausted in late 2012; that meant Finanical Hardship projects could not move forward until a school facilities bond was placed on a ballot AND passed by California voters. Fortunately, in November 2016, Californians passed Proposition 51, a statewide school bond measure that authorized $7 billion in general obligation bonds for the construction and modernization of public school facilities.

Passage of Prop 51 put funding back in the "pot" to fund projects like ours. That was the good news. But there was bad news to follow. It is important to note that building codes are updated every three years to comply with new regulations and ADA requirements. As our projects sat for over four years to be funded, they became outdated regarding building codes. While we had done everything that was expected during this process, construction costs escalated and we were forced to re-apply for these projects.

Fast forward to 2018. Our projects were now over 8 years old from the original application date of 2010. We worked hard to meet state deadlines under the new guidelines passed with Prop 51 and were able to go under contract for both the modernization and new construction projects with Chico-based United Building Contractors. Presently, the modernization project is DSA-approved (Division of the State Architect) and the new construction project is currently in process for DSA approval. The alignment of the two projects is a cost-saving move for the district as it allows us to pay one construction company for two projects at the same time.

While still not approved, and based on the history of the projects outlined above, below is the most recent drawing of the new construction project as submitted to DSA for approval. A sizable piece of our new construction project is a new on-site fire water system that will feed new fire hydrants and fire sprinkler system in the new multipurpose building. This will involve a new pump/tank/well system.

Additionally, due to the history of the projects that I outlined above, we have had to make significant changes to the original plans that include moving the multipurpose building from the northwest corner of the campus to south of the current playground. This was done as concern was raised that the district would not have the funds to build a new football field that was originally going to move to the east part of the campus - running north and south along the far east boundary of campus where the current bus barn and garden are. Moving the new building and classrooms to the location as displayed below will leave our current football field intact and no need for district funds to be spent on the creation of a new football field as those types of upgrades are not state-funded. 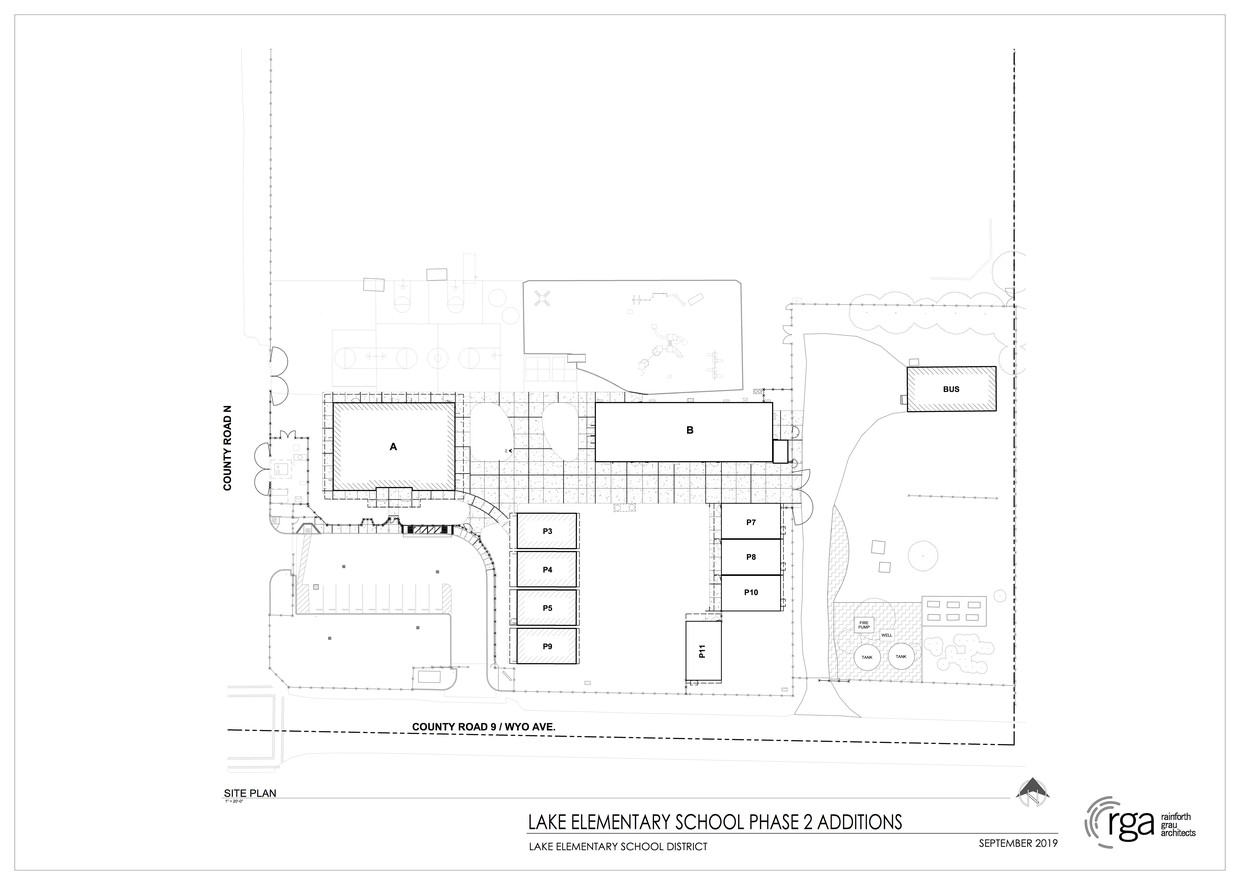 We are still working with a modular building company regarding the design of the multipurpose building. The current proposal is below. As seen in the plans, this will provide a dining area for up to 210 occupants, or an assembly area able to house 450 occupants, well above our current cafeteria occupancy load. Also exciting with this design is the addition of bathrooms for boys, girls, and staff. 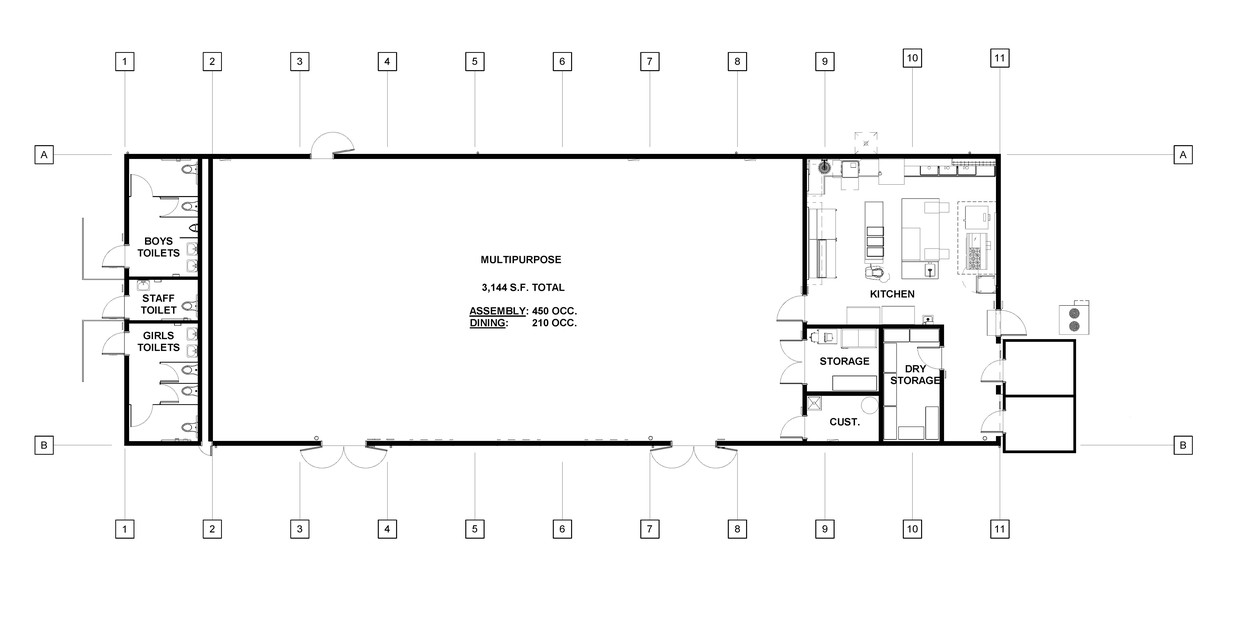 In the plans above that include the entire campus, the scope of the modernization project includes "modernization by replacement" for buildings labeled P7 and P8, which will replace two of our oldest classrooms. As submitted in the original application, it is our hope that the main building transition away from a kitchen/cafeteria and into three larger classrooms and administration offices. In addition, our plans include an update of both the bathrooms, but most likely will not include additional bathrooms as those will be located in the new building. Also part of the modernization work is the update of surrounding sidewalks as they do not currently meet ADA guidelines. As we gain a better understanding of how the alignment of the two construction projects impact funding, we will have a better idea of upgrades to the main building.

While we are not where we thought we would be nine years ago when the original applications were submitted in 2010, we are moving forward in providing updated buildings and facilities to our Lake Panthers.

The following is an estimate of the timeline that was shared with me via our architect firm:

I am a bit hesitant sharing the above timeline as it seems like a very quick turnaround considering the amount of work that needs to be done. Time will tell and we will continue to use our Patience Tool as we embark on this journey together.

Based on the above timeline, our 2020-21 school calendar may not be impacted, however, I will be recommending two calendars to the board this winter - a normal school calendar as well as a construction calendar that will include a later start date.

We appreciate your patience through this process and encourage you to always ask questions you might have regarding school construction. I will do my best to answer them.

Nikol is using Smore newsletters to spread the word online.