Security implies a stable, relatively predictable environment in which an individual or group may pursue its ends without disruption or harm and without fear of disturbance or injury. The concept of security in an organizational sense has evolved gradually throughout the history of Western civilization, shaped by a wide variety of institutional and cultural patterns.

In examining the origins and development of security, it should be noted that security holds a mirror up, not to nature, but to society and its institutions. In medieval England there were programs to clear brush and other concealments on either side of the King’s roads as a precaution against robbers; to protect citizens from night thieves, there were night watchmen. In the United States in modern times, these rudimentary security measures find their counterparts in the cleared areas adjoining perimeter fences and buildings, in security patrols, and in intrusion alarms.

Throughout history it is possible to trace the emerging concept of security as a response to, and a reflection of, a changing society, mirroring its social structure and its economic conditions, its perception of law and crime, and its morality. It is important to know that security remains a field of both tradition and dramatic change. The introduction of high tech systems and computers has changed the nature of the job of 21st century security professionals. Security today must be directed toward modern problems including computer crime and world terrorism, yet we cannot forget the basic foundations on which the field has developed.

Early on, rulers began to appoint enforcement officers to help with public and private security. During the development of security in ancient times, many people relied upon physical security such as weapons, lake or cliff dwellings, walls, and gates. One example of an ancient security measure is the Great Wall of China.

The Great Wall of China is a series of stone and earthen fortifications built, rebuilt, and maintained between the 5th century BC and the 16th century to protect the northern borders of the Chinese Empire during the rule of successive dynasties. Several walls, referred to as the Great Wall of China, were built since the 5th century BC. The most famous is the wall built between 220 BC and 200 BC by the first Emperor of China, Qin Shi Huang; little of it remains; it was much farther north than the current wall, which was built during the Ming Dynasty.

The Great Wall is the world's longest human-made structure, stretching over approximately 6,400 km (4,000 miles) from Shanhaiguan in the east to Lop Nur in the west, along an arc that roughly delineates the southern edge of Inner Mongolia, but stretches to over 6,700 km (4,160 miles) in total. It is also the largest human-made structure ever built in terms of surface area and mass. At its peak the Ming Wall was guarded by more than one million men. It has been estimated that somewhere in the range of 2 to 3 million Chinese died as part of the centuries-long project of building the wall.

The first major wall was built during the reign of the First Emperor, the main emperor of the short-lived Qin dynasty. This wall was not constructed as a single endeavor, but rather was created by the joining of several regional walls built by the warring states. It was located much further north than the current Great Wall, and very little remains of it. The Great Wall seen today was built during the Ming Dynasty, on a much larger scale and with longer lasting materials (solid stone used for the sides and the top of the Wall) than any wall that had been built before. The primary purpose of the wall was not to keep people out who could scale the wall, but to ensure semi-nomadic people on the outside of the wall could not cross with their horses or return easily with stolen property.

The development of systems of protection (security) and law enforcement in England emerged with greater rapidity and sophistication beginning in the 14th century and lasting through 18th century. It is important to know that seeds for this development were planted during the social revolution that heralded the end of the remaining elements of the feudal structure in the latter half of the 13th century.

By the 1700's the social patterns of the Middle Ages were breaking down. Increased urbanization of the population created conditions of considerable hardship. Poverty and crime increased rapidly. No public law enforcement agencies existed that could restrain the mounting wave of crime and violence, and no agencies existed that could alleviate the cause of the problem.

Different kinds of police agencies were privately formed. Individual merchants hired men to guard their property. Merchant associations also created the merchant police to guard shops and warehouses. Night watchmen were employed to make their rounds. Agents were to recover stolen property, and the people of various parishes into which the major cities were divided hired parochial police.

A brief history of security in England shows that the Court of Star Chamber, which gave the English monarchy full control over decisions of law, had been abolished in 1641. In 1689, Parliament agreed to crown William and Mary if they would reaffirm the ancient rights and privileges of the people. They agreed, and Parliament ratified the Bill of Rights, which, for all time, limited the power of the king, as well as affirming and protecting the inalienable rights of the individual citizens.

Security in the Middle Ages

In 1214 A.D. the English king, John, under pressure from his barons, approved the Magna Carta. The lines ‘No freeman shall be taken, imprisoned, or in any other way destroyed...except by the lawful judgment of his peers, or by the law of the land. To no one will we sell, to none will we deny or delay, right or justice’ (Breay & Harrison, nd, para. 5) established due process for citizens.

Later in the same century, in 1285 A.D., the Statute of Winchester (also known as the Statute of Westminster) established many security concepts for each village, and its citizens, to obey. The concept of ‘hue and cry’, whereby it was each and every citizen’s obligation to apprehend felons, came from this statute. This concept included the practices of citizen’s arrest, as well as posses, the institution of a sheriff’s right to form a posse of citizens to pursue and capture criminals. Both of these methods are still used today by private security and public officers. The statute also demanded certain physical security measures took place such as:

By the 18th Century, it is possible to discern both the effort toward communal security and the kinds of problems that would continue to plague an increasingly urban society into modern times.

In 1737, for instance, a new aspect of individual rights came to be acknowledged: for the first time, tax revenues were used for the payment of a night watch. This was a significant development in security practice because it was a precedent-setting step establishing the use of tax revenues for common security purposes.

In 1748, Henry Fielding, magistrate and author (most notably of Tom Jones), proposed a permanent, professional, and adequately paid, security force. His invaluable contribution included a foot patrol to make the streets safe, a mounted patrol for the highways: the famous “Bow Street Amateur Volunteer Force” of special investigators, and police courts. Fielding is credited with conceiving the idea of preventing crime instead of seeking to control it. 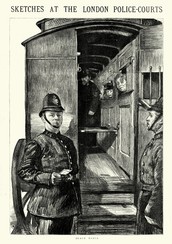 In 1822, Sir Robert Peel criticized the poor quality of policing in London. He was able to pass the Metropolitan Police Act in 1829. This act created the first organized British metropolitan police force and became the model for modern-day police.

Peel emphasized the preventive aspects of law enforcement. English colonists brought their system of policing to America in the 1600s and 1700s. This system included the offices of the justice of the peace, sheriff, constable, and night watch. After the passage of the Metropolitan Police Act in England, police departments began to emerge in the United States. 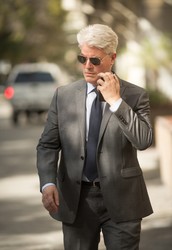 The 20th and 21st Centuries

By the middle of the 20th century, the use of private security services had expanded to encompass all segments of the private sector. Increase in government regulations and the inability of the public police to respond to every private need further promoted the growth of private security. In 1954 George R. Wackenhut and three other former FBI agents formed the Wackenhut Corporation as a private investigative and contract security firm. By the 21st century the threats of home grown and international terrorism increased the call for more private and public security sectors to protect the homeland. 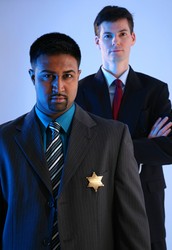 Security in the United States

Security practices in the early days of colonial America followed the patterns colonists had been familiar with in England. The need for mutual protection in a new and alien land drew the colonists together in groups much like people of earlier centuries.

As the settlers moved west in Massachusetts, along the Mohawk Valley in New York, and into central Pennsylvania and Virginia, the need for protection against hostile Indians and other colonists, French, and Spanish, was their principle security interest. Settlements generally consisted of a central fort or stockade surrounded by the farms of the inhabitants. If hostilities threatened, an alarm was sounded and the members of the community left their homes for the protection of the fort, where all the able-bodied persons were involved in its defense. In such circumstances, a semi-military flavor often characterized security measures, which included guard posts and occasional patrols.

Protection of people and property in established towns again followed English traditions. Sheriffs were elected as chief security officers in colonial Virginia and Georgia; constables were appointed in New England. Watchmen were hired to patrol the streets at night. These watchmen remained familiar figures and constituted the primary security measures until establishment of full-time police forces in the mid-1800's. Such watchmen, it should be pointed out, were without training, had no legal authority, were either volunteer or else were paid a pittance, and were generally held in low regard, circumstances that bear a remarkable similarity to observations in the RAND report on private security in 1971.