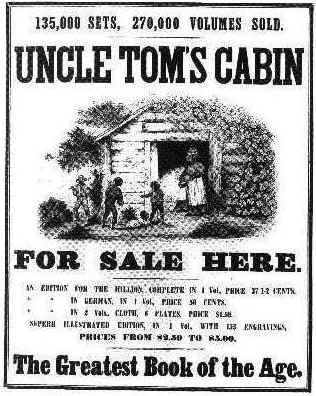 "Uncle Tom's Cabin" is a book about the horrors of slavery written by Harriet Beecher Stowe. It became incredibly popular in the 1850s with the second highest sales of the century following the bible. While nonfiction, it detailed atrocities that many slaves faced. "Uncle Tom's Cabin" made the topic of slavery much more overt and talked about. This book pushed many northerners to demand abolition, and vastly strengthened the movement as a whole. This in turn depend the rift between north and the south. While the north demanded an end to slavery and prolifically read "Uncle Tom's Cabin", the south banned the book entirely. Further more as the book spread to Europe, many European powers withdrew their support of the south.

Nick-named Beecher's bible, this book was a key factor in polarizing the United States, leading to the Civil War. The topic of slavery was a major source of domestic tension since the dawn of the nation. However "Uncle Tom's Cabin" was a large log that was thrown onto a smoking country. Not only did it feed the fires of war, but this book also acted as a catalyst for other significant events that led to the Civil War. Abraham Lincoln is even rumored to have said "so this is the little lady who started this Great War". Without this book, abolitionism may not have gained the strength and popularity needed to cause the violent outbreak of the Civil War.