The Life of Samuel Crompton

British inventor Samuel Crompton was born on December 3rd, !753 near Bolton, Lancaster. As a youth Crompton spun cotton on a "spinning jenny" for his family. A spinning jenny is a device used to reduce the amount of work needed to produce yarn, invented in 1764. Crompton was inspired by the jenny's defects to invent something better. in 1719, after years of devoting time, and money Crompton finally came up with a machine that drew out and gave the final twisting to the cotton fibers fed into it, reproducing mechanically the actions of hand spinning. Demand for Crompton’s yarn was heavy, but he could not afford a patent so he told the machine’s secret to a number of manufacturers on the promise that they would pay him money for it. 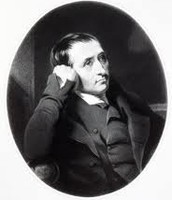 This is a picture of Crompton himself. He was married to Mary Pimlott. He had 5 sons John, James, George, Samuel and Robert. He also had a daughter named Betty.

Samuel Crompton invented the spinning mule in 1779 that combined the moving carriage of the Spinning Mule with the rollers of the frame. The spinning mule gave the user great control over the process of weaving, many different types of yarn could be produced.

This is a picture of Hall i'th' Wood. Descendants of the late mule inventor Samuel Crompton, often go to the building to learn the history of their roots.

Causes and Development of the Industrial Revolution in Britain

Positive and negative effects on cities of the industrial revoloution

Without the Industrial revolution electric lights would go out, our cars and airplanes would disappear, telephones, radios, and television would disappear as well and most of the stocks on the shelves of department stores would be gone. These are some of the positive affects of the Industrial revolution, it gave us cars, planes, phones, and television.

The Industrial Revolution brought on a lot of debt though. With the demand of parts for machinery business were forced to supply them and often companies did bring in enough income to pay for the parts ending in debt to the supplier. Although industrialism brought many good items to Britain, the factories brought in men, women, and often small children and payed them very low wages. Along with low wages, harsh punishment and unprotected work around machinery.

Positive and negative effects on rual life and enviroment from industrialism

One negative effect on the environment from the Industrial Revolution is the use of factories and mass production led to the end to some natural resources, leaving the environment damaged. One is deforestation, which is the clearing of forest trees for use in production. When the trees are cleared, the wildlife in the forest also becomes uprooted.

Poor working conditions during the Industrialism

The working class made up 80% of society. Most laberors worked 10-14 hours day, six days a week, with no paid vacations or holidays. Often workers were under payed and that led to starvation because the workers did not have enough money to support their families. Also there was dangerous working conditions. An article read on a website that "The workers were often abandoned from the moment that the accident occurs; their wages are stopped, no medical attendance is provided, and whatever the extent of the injury, no compensation is afforded" (Sadler). Workers could also be fired if they were injured just so the factory owners could avoid spending money on them.

How was the Industrial Revolution in Britain different than in the U.S.?

The industrial revolution in America was much more commercialized and made more capitalist rather than in England where is was to a smaller scale.

Just like most wars in America, they are very advertised while in other place such as Britain it was not.

Adam Smith thought that trade and industry should be controlled by private owners for profit, rather than the state. Karl Marx on the other hand believed that all property is publicly owned and everybody works and is paid to their abilities. These differ by the fact that Adam Smith thought that the rich should control the state's money but Marx believed that the people should have a voice and work for the money they deserve.
Spinning mule