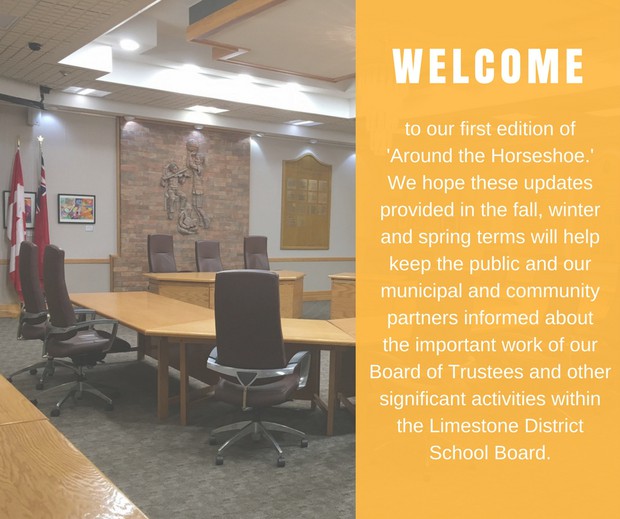 About the Board of Trustees

The functions of the Board include:

The Board also has two Student Trustees who serve one-year terms and are elected by the Limestone District Inter-School Student Council. Student Trustees may discuss policy and vote but their votes are non-binding.

Responsibility for day-to-day operations is delegated to Senior Staff and to the administrative, teaching and support staff of the district. 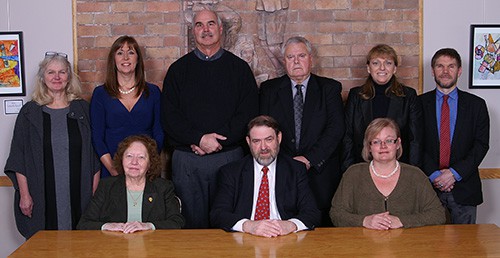 Trustees were provided with an update on school capital/retrofit projects completed or started over summer 2016. Numerous projects including

Trustees learned more about the recent release of School Facility Condition Index (FCI) data by the Ministry of Education. FCI review costs of facility renewal need or events in relation to cost of replacing buildings and is expressed as a percentage using a formula: five-year renewal costs divided by current replacement value. A high FCI rating does not mean schools are unsafe or student/staff well being is endangered. Schools are monitored regularly for health and safety and maintenance issues by facilities staff and sometimes third-party professionals. Trustees were walked through an example showing differences between LDSB & MOE data (both use same database but sometimes taken at different snapshot of time/other parameters used). To clarify, FCIs taken by LDSB in May 2016 over 10 years & MOE in August 2016 over five years. These differences are acceptable and expected. Schools built in the last five years were not assessed. Learn more by reading report in Board package. Follow http://bit.ly/2cyqnYI and click on September 14 meeting.

LDSB staff held a Community Planning & Partnership Meeting in early September with municipal partners and community agencies as an opportunity for two-way sharing of planning information. The Board presented the Long-Term Accommodation Plan and school spaces available for partnerships, and properties that are surplus. Here is the meeting presentation http://bit.ly/2fyfQhR and here are the meeting minutes http://bit.ly/2fkqP0P

September Board Meeting opened with a video about LDSB's newest Kindergarten to Grade 8 Molly Brant Elementary School where Anything is Possible. http://bit.ly/2co09gP

KCVI had its own unique way to welcome the class of 2020 including incoming Grade 9 students who will eventually be part of the new intermediate and secondary school built on the property of the former QECVI. 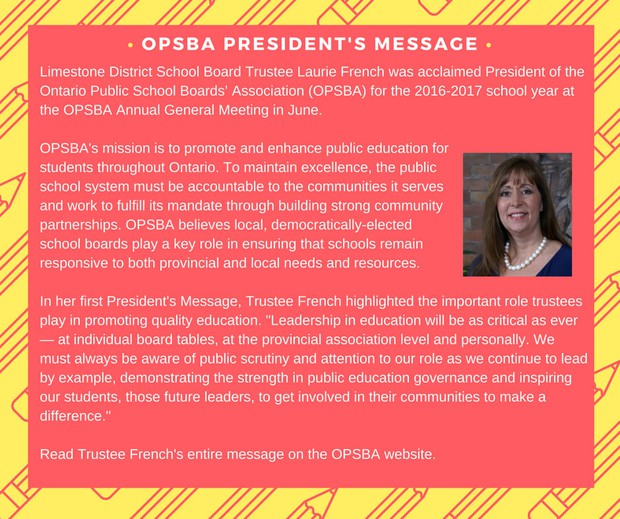 Trustees approved a Pupil Accommodation Review for Yarker FS and Odessa PS following a recommendation from the School Enrolment/School Capacity Committee of the Whole Board (SE/SCC). Because Yarker was identified as a school with low enrolment and facility utilization rates now and into the projected future, staff recommend that Yarker be closed and students relocated to Odessa. The goal in reviewing the schools through a PAR is to:

Following the approval of a review, a Pupil Accommodation Review Committee (PARC) was established. The PARC, which includes parents from the affected schools, serves as the official conduit for information sharing between the Board and school communities. It may comment on the Initial Staff Report and may seek clarification. The PARC may also provide options other than those in the Initial Staff Report as long as supporting rationale is included. The PARC will include four working committee meetings and two public meetings within a six-month period. For more information, visit http://www.limestone.on.ca/PARC/Yarker. Trustees also approved a motion to approach the Algonquin & Lakeshore Catholic District School Board to look at possible sharing of space on Wolfe Island.

In June 2016, Trustees approved the use of an indigenous acknowledgment of territory that would be reviewed by the Board's Aboriginal Advisory Committee. The statement is similar to others within the city, however, there are slight differences. It reads: The Limestone District School Board is situated on the traditional territories of the Anishinaabe and Haudenosaunee. We acknowledge their enduring presence on this land, as well as the presence of Métis, Inuit and other First Nations from across Turtle Island. We honour their cultures and celebrate their commitment to this land. The acknowledgment would see the placement of the Haudenosaunee and Anishinaabe alternated in readings as appropriate. The statement will be used at all Board and committee meetings, and in schools where appropriate. The acknowledgment will roll out in November during Indigenous Education Month.

Sir John A. Macdonald Public School Vice Principal Joanne Borges presented to Trustees on 'makerspaces' and why they are significant to teaching. Most research shows that everyone learns best when we do it ourselves: designing, creating, innovating & collaborating are key. Makerspaces are not all technology-driven. They can be no-tech or low-tech. It's all about cultivating a culture of learning and inquiry. Teachers help choreograph learning but makerspaces should be student-driven & focus on STEAM (science, technology, engineering, arts & math).

Trustees began work on a new strategic plan to help guide its work over the next five years. As part of that work, Trustees reconfirmed the Board's existing mission statement: We prepare students within safe & inclusive environments to embrace a changing world as informed, responsible citizens. Trustees also participated in a brainstorming session to create a renewed vision statement that relates to the Board's existing mission. Next, the Trustees will confirm values statements. Next, staff will engage stakeholders in consultation process over the fall and early winter to help solicit input using a variety of methods. 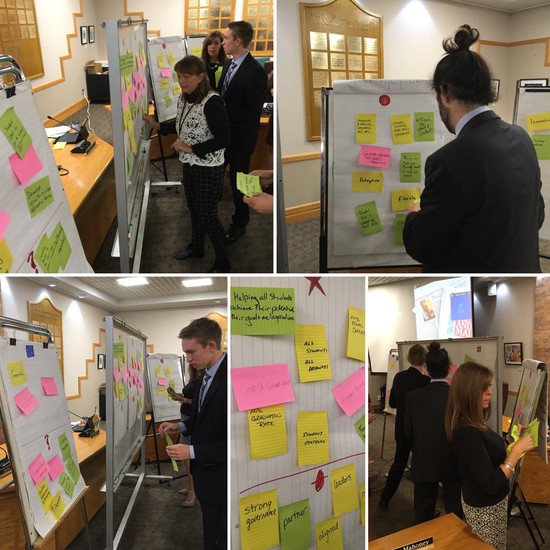 The Board of Trustees approved the 2015-2016 consolidated financial statements following motions from the Audit Committee. The Board also extended its sincere thanks to outgoing community members Adam Young and Ron Betournay for serving six years as non-board members on the committee. Both gentleman volunteered their time and service for two consecutive three-year terms as permitted under provincial regulation. The Board will soon advertise for two new non-board committee members. Eligibility for appointment includes non-employees of the Board with accounting, financial management or other relevant business experience that would enable he or she to understand the accounting and auditing standards applicable to the Board.

The Board's Special Education Advisory Committee (SEAC) report was presented to Trustees for approval. The Committee recommends that the Board write a second letter to the Ministry of Education to address recent cuts to special education funding as well as the possibility of a meeting with the local MPP to advocate on the Board's behalf. Trustees support a follow-up letter to Ministry of Education and refer the motion to engage MPP back to SEAC to await response from Ministry.

Trustees were provided with an update on construction of the new intermediate and secondary school to bring together students from KCVI, the former QECVI and Module Vanier. The demolition of QECVI is almost complete. Pre-qualifications have gone out for general, mechanical & electrical contractors which will be evaluated over the next several weeks. The Board is working with the project architects and cost consultant to finalize the estimate and then seek Ministry approval.

Student Trustees Will Sanderson from Sydenham HS and Josiah Ascough from LCVI shared recent activities of the Inter-School Council which represents all secondary students' councils in LDSB. Their work so far this year has included a focus on youth homelessness through work with United Way of KFL&A. Both Student Trustees sit on the United Way's Youth Homelessness Committee. Inter-School Council plans to hold a coffee house event in November to raise money and bring awareness to this issue among local students. 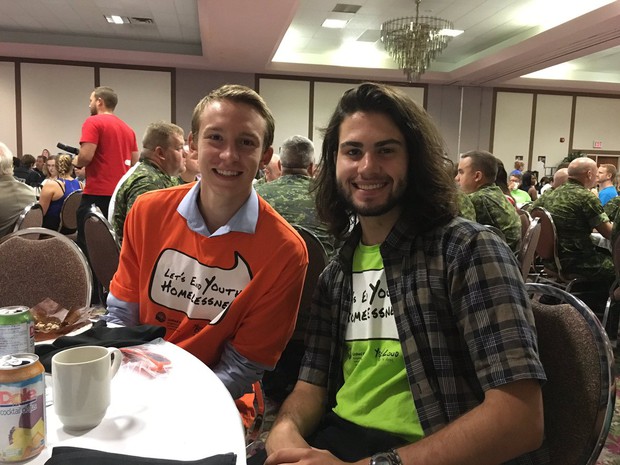 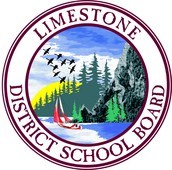 @LimestoneDSB
The Board serves more than 19,000 elementary and secondary students in 60 schools and 8 education centres covering a geographic area of 7,719 square kilometres.
220 Portsmouth Avenue, Kingston, ON, Canada ldsbcomms@limestone.on.ca 613-544-6925 limestone.on.ca

Follow Karen Smith
Contact Karen Smith
Embed code is for website/blog and not email. To embed your newsletter in a Mass Notification System, click HERE to see how or reach out to support@smore.com