Curious is using Smore newsletters to spread the word online.

Get email updates from Curious: 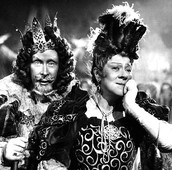 A King and a Stepmother

«Cinderella» is a musical fairy tale of 1947.
The film is directed by Nadegda Kosheverova and Mikhail Shapiro. It is starred by Janina Żejmo, Aleksey Konsovsky.

The plot of the film is based on the Charles Perrault’s tale but it’s full of irony and music.

The main characters are Cinderella, her evil stepmother, a kind King and a handsome Prince. The film tells a story of a poor girl, who lives in a fairy Kingdom. At the Royal Ball Cinderella falls in love with the Prince. In the end Cinderella marries Prince.
We are impressed by this film. We like it because it’s very interesting and full of humour. We would recommend everybody to watch it.