Shreya is using Smore newsletters to spread the word online.

Get email updates from Shreya:

Scarlet Macaws are found in various places, such as, Central America, South America, Belize, Guatemala, Panama, Nicaragua, Brazil, Columbia, Ecuador, French Guiana, Peru, Surinam and Venezuela. Their home is either in the lowlands or the emergent part of the Rain forests. They live in the tropical climate.

The Scarlet Macaw is classified as bird. Its plumage is scarlet in color. Plumage means the color of all the feathers on any bird's body. The rump and tail feathers are a light blue. The average height of these magnificent birds are 32 inches. The weight is 22 lbs. Just like the way humans communicate, Macaws communicate to each other by squaking loudly, squeaks and screams. 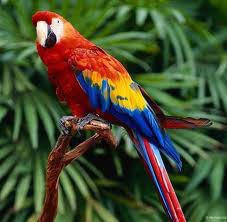 Scarlet Macaws are endangered for a few reasons. The first one that is quite obvious is that other animals eat them as food. The second reason is that people hunt them down to use their feathers for things they can use to sell.

These Macaws eat food, such as, fruits and nuts. Their beaks are sharp to help eat them break the shell of the nuts. To help with digestion they eat clay. They fly and and search for food.

They are prey to falcons, Eagles, Piranhas and most definitely humans.

These birds have great adaptation characteristics. They have sharp beaks to help hurt and injure its predator. They have additional limbs to start climbing. Their structure includes sharp talons and a big beak. One negative fact is that they cannot camouflage well due to their bright and colorful plumage.

Shreya is using Smore newsletters to spread the word online.

Follow Shreya Kulkarni
Contact Shreya Kulkarni
Embed code is for website/blog and not email. To embed your newsletter in a Mass Notification System, click HERE to see how or reach out to support@smore.com
close