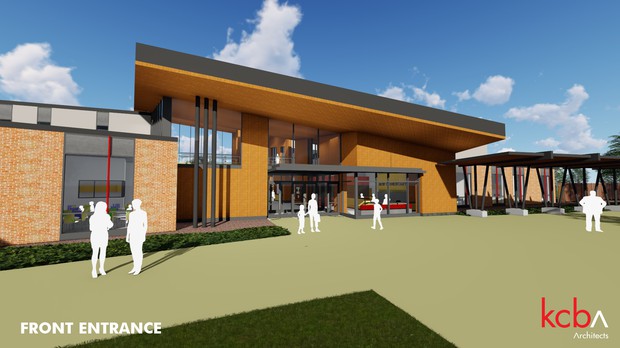 Brian Brandis from KCBA gave an update on the newly proposed elementary school in Upper Macungie Township. He gave a site progress update for grading and landscape and spoke about public meetings that occurred in late May. At those meetings, plans for the new school were unveiled and questions were answered. Rich Sniscak, Superintendent, and the elementary school planning team also met with officials from Upper Macungie Township to begin a dialogue about the school.

Jeff Machyk from Snyder Hoffman gave an update on three HVAC systems that were proposed for the new building. Systems were compared and analyzed for their ability to control temperature, humidity, and noise.They also studied lighting, cooling, and heating needs and costs to purchase and maintain units. A blower coil system was decided as the favorite for energy efficiency and construction cost as well as ease to repair.

Jamie Bortz, the Project Designer at KCBA, reviewed proposed changes to the new elementary school since the meeting in May. Literacy centers and maker spaces that are proposed in the classroom wings were flipped so that maker spaces are planned for the top floors in order to have more height and light for creative explorations stations. The Literacy Center is now being proposed as an enclosed space with glass panels to help control noise and to become a securable space. The glass panels still keep it visible at the entrance of the building. Also newly proposed is more shade for the outdoor learning spaces.

Concerned about students who want to start a Pro-Life Club at PHS and being denied, one resident asked the School Board to reconsider the denial of a Pro-Life Club at PHS. Steve Miller, the District's solicitor, explained that he had been in touch with the Thomas More Society on May 24th. He said the club was rejected as it was not in compliance with rules that all Parkland High School clubs must adhere to. If those requirements are met, club approval will be granted, but despite several attempts at communicating with the Thomas Moore Society, the district is still awaiting a substantive response, he stated.

David Kennedy gave the LCCC report which can be viewed here.

New lunch prices for 2017-18 were approved as follows:

Rob Cohen and Lisa Roth did not approve payments to the Cyber Charter Schools as they don't believe the funding formula is fair and they believe the schools are failing students with regards to rigor and academic performance.

The Board and Mr. Sniscak commended Parkland High School for another great graduation event last week. 773 graduated in the Class of 2017 at PPL Center. They congratulated all of the students. Mr. Bold made mention of the IU graduations he attended and was happy to see many students with special needs graduating.

The Board enjoyed hearing about and meeting the many talented students who were honored at the board meeting this evening.