Qatar is a small peninsula on the western shore of the Arabian Gulf that covers approximately 4,247 square miles (6,286 square kilometers). Qatar and Bahrain both claim the uninhabited Hawar Islands just west of Qatar.

In 1998, the population was estimated at 579,000. Most estimates agree that only about 20 percent of the population are Qatari, with the remainder being foreign workers. A total of 91.4 percent live in urban areas, mostly in the capital. There is an imbalance of males and females in the total population.

In the 1760s, members in the Al-Khalifa of the Utub tribe migrated to Qatar from Kuwait & central Arabia. They expanded they're territory by occupying Bahrain. Since then, they have been rulers. In 1916, Abdullah had in agreement, which provided British protection & special rights for British. They also made sure that the British would only stay in the Qatar area. The constitution will pretty much always state that the ruler will be the chosen one from the family Al-Thani.

Qatar's cuisine had been influenced to Iran & India. They have been getting Arabs from North Africa & the Levant as dietary convention. Muslims generally refrain from eating pork & drinking alcohol. Qatar's cuisine include the many native varieties of dates and seafood, foods grown locally or in Iran are considered local delicacies. In midday the main meal is eaten, on the late evening & mornings the lighter meal is eaten. Arabian coffee made of a lightly roasted bean that is sweetened and spiced with cardamon is served in small thimble-shaped cups to guests in homes and offices, qahwa helw (sweet coffee), a vivid orange infusion of saffron, cardamon, and sugar, is served on special occasions and by the elite.

This is Qatar Cuisine.

Dates are one of the major foods grown in Qatar, so the time has come to challenge myself with this treat once again. 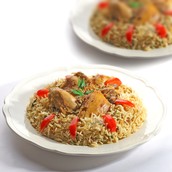 All the citizens & ruling families are Sunni Muslims. Specially Wahhabis. There is also a big minority of Shi'a Muslims. The Iranian Revolution & the Iran-Iraq War, & alleged discrimination against Shi'a Muslims.