We are excited to announce that Dr. Donna Ford will be returning to Cheltenham School District this year as part of an ongoing partnership centered around equity access to gifted educational services. On November 28th, she will be working with Challenge Consultants and Psychologists on the implementation of a new gifted recruitment protocol aligned to the best and most current practices. At 6:30 pm she will be introducing the new recruitment protocol to the Board of School Directors and community during the Educational Affairs meeting held at the District's administration building.

Dr. Ford is Professor of Education and Human Development in the Special Education Department of the Peabody School of Education at Vanderbilt University. Her research in the field of gifted education focuses on the recruitment and retention of culturally different students, multicultural and urban education, closing the achievement gap, minority student achievement and underachievement, and the role of family involvement.

She is a prodigious researcher with over 200 scholarly articles. She is also a two-time board member of the National Association for Gifted Children, and she is a regular editor of academic papers in her fields of expertise. She works regularly with school districts across the country to evaluate their systems and methods for gifted identification and helps support the work of equity access nationwide. We are excited to bring Dr. Ford to CSD to help support the goals of our strategic plan.

A short video introduction of Dr. Ford can be found below: https://www.youtube.com/watch?v=WB-iUlQz5uo

For a broader view of her accomplishments see below: http://peabody.vanderbilt.edu/bio/donna-ford 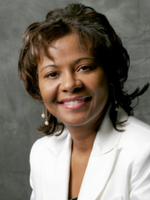 Imagine, as a 3rd-grader, being asked to write a letter to your 12th-grade self, telling that person what – as a 3rd-grader – your interests, goals and aspirations are and what you think you want to be when you grow up. Now imagine you’re a high school senior opening the letter that you wrote to yourself almost 10 years ago.

That was exactly the experience of six Cheltenham High School seniors on Thursday morning, November 2, as they tore open envelopes that they had sealed themselves – and for themselves -- when they were still children, as opposed to young people on the threshold of adulthood.

Erika Wimms, currently a 4th-grade teacher at Myers Elementary, was each of the six students’ 3rd-grade teacher when they wrote the letters. She has been having students write letters to their older selves for 20 years.

“I know they don’t believe me when I tell them they’ll be opening these letters when they’re in the fall of their senior year,” said Wimms. “They think it’s just busy work.

“It was overwhelming watching these kids open these letters that I watched them write a long time ago,” Wimms continued. “But I felt so proud seeing all that they have achieved over the years.”

For some of the students, what they wanted to be when they grew up is the same as what they want to do now, with maybe some minor changes. For others, their goals have changed considerably over the last 10 years.

Alexis Crosby thought it was “surreal” opening her letter, but was surprised that she met her goals, one of which was to be a track star. Now she has a scholarship for track and, although her goal of being a doctor has changed, it’s only a slight change as she intends to become an occupational therapist.

“Bittersweet,” was how Grace Soldacki described the experience of reading her letter as she realized how much she had changed. “I was shocked that I said I wanted to be a teacher,” she said. Now she’s still deciding between graphic design and sociology, but knows she’d like to attend West Chester University.

Vivek Olumbe was “surprised” reading his letter because he remembered writing it but said he, “never thought I’d see it again.” He was also surprised at how much his interests had changed, saying that he thought he wanted to be an explorer and live in Australia. Today, he wants to be a computer programmer and hopes to go to Penn.

Brandon Rivers was “shocked,” because he didn’t remember writing his letter but said opening it and seeing what he wrote was, “really great.” His interests only shifted a little bit, as originally, he wanted to write reviews for video games and now he wants to design video games.

Jake Wilken didn’t think he’d ever see his letter again, so said it was “weird” seeing it again, and that his interests had changed quite a bit since 3rd-grade, when he thought he wanted to be an animal rescuer. Now he wants to be a history teacher and intends to take a year to travel after graduation. 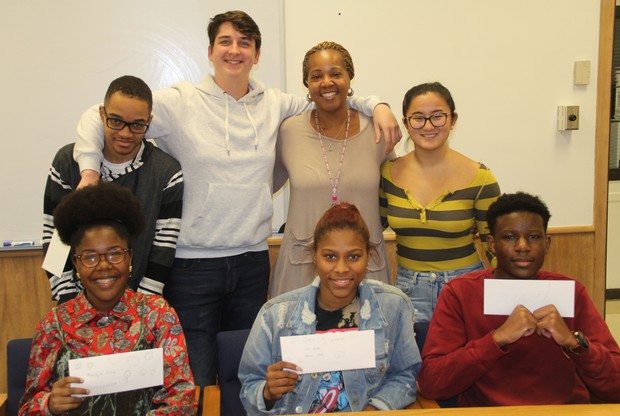 On an unseasonably warm day for November, the staff at the Central Office was treated to a performance by the CHS Marching Panthers. It was certainly a nice break in the routine to step out on a beautiful day and see our talented marching band members strut their stuff! Thank you Marching Panthers! 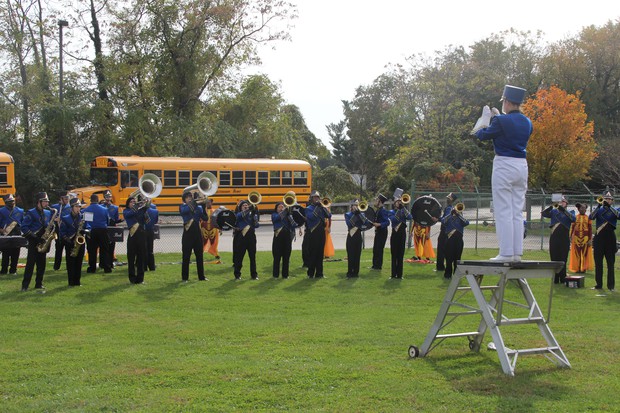 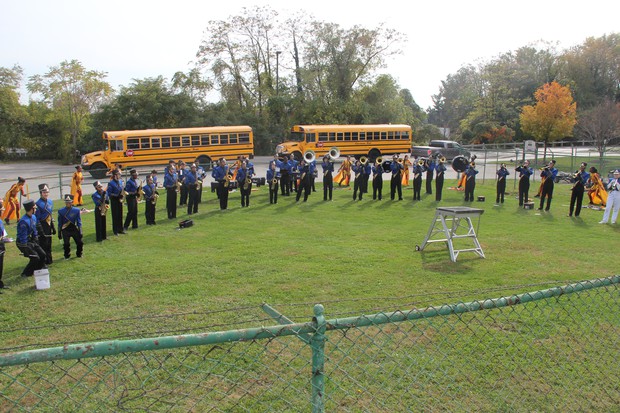 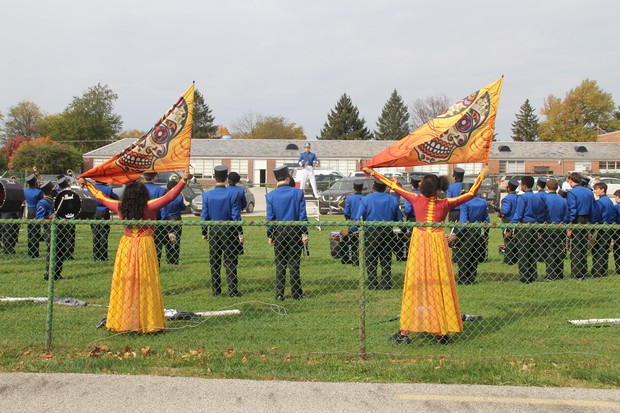 Join CBKTheatre on November 9th and 10th for its fall production of 12 Angry Jurors. Based on the iconic film, 12 Angry Jurors takes place in a New York City courthouse as a jury commences deliberating the case of an 18-year-old boy from a slum who is on trial for allegedly stabbing his father to death. If there is any reasonable doubt they are to return a verdict of not guilty. If found guilty, the boy will receive a death sentence. 12 Angry Jurors explores many techniques of consensus-building and the difficulties encountered in the process— among a group of people whose range of personalities and experiences adds intensity and conflict.

The show begins at 7:30 p.m. at CHS Little Theatre. Don't miss your chance to see another great CBKTheatre production!

You may buy your tickets on the online payment center here https://cheltenham.revtrak.net/ or at the door! It is suggested that students who attend should be Elkins Park age or above. It's a serious and mature play but not inappropriate in any way. 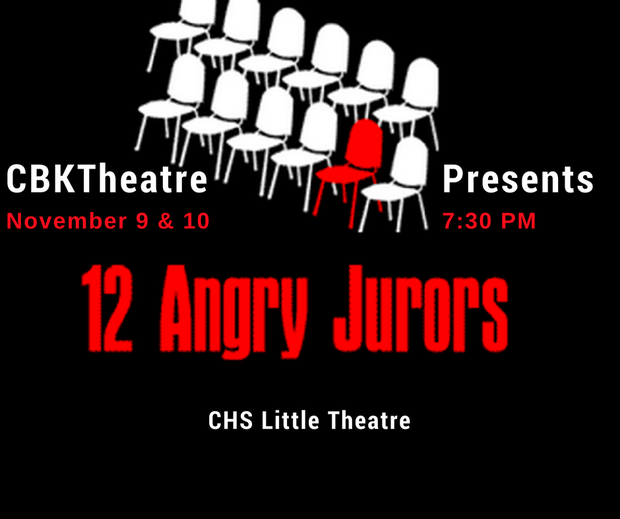 Dr. Donna Ford will be returning to CSD to continue her work with us around our gifted identification protocols and procedures. ​Dr. Ford is Professor of Education and Human Development in the Special Education Department of the Peabody School of Education at Vanderbilt University. Her research in the field of gifted education focuses on the recruitment and retention of culturally different students, multicultural and urban education, closing the achievement gap, minority student achievement and underachievement, and the role of family involvement.

She is a prodigious researcher with over 200 scholarly articles, is a two-time board member of the National Association for Gifted Children, and she is a regular editor of academic papers in her fields of expertise. She works regularly with school districts across the country to evaluate their systems and methods for gifted identification and helps support the work of equity access nationwide. We are excited to bring Dr. Ford to CSD to help support the goals of our strategic plan.

A key result of her work with us will be an updated gifted identification protocol. As a result, we will be postponing the 3rd grade universal screening tool, the Naglieri Nonverbal Abilities Test (NNAT), for the first week of December. Second grade students will take the NNAT in the spring as they normally would. ​

A short video introduction of Dr. Ford can be found below: https://www.youtube.com/watch?v=WB-iUlQz5uo

For a broader view of her accomplishments see below: http://peabody.vanderbilt.edu/bio/donna-ford

The Glenside students dressed up as their favorite book character as they paraded around the school to show their love of reading! 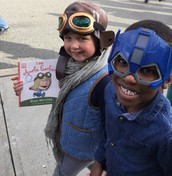 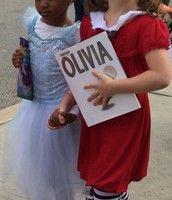 Are you a recreational high school-age player who wants to see where your skills stack up? Are you an existing CHS or recreational high school-age baseball player who wants to stay sharp in the off-season? Or, are you a student considering trying out for the CHS boy’s baseball team in the Spring? Well, if the answer is “yes” to any one of those questions, consider attending the free/optional Fall baseball workouts on Thursdays after school from 3p-5p at the Cheltenham Little League baseball fields located at: 650 Woodland Ave, Cheltenham, PA 19012. Transportation not provided/carpools strongly encouraged. Questions? Email: chsbaseballpa@gmail.com

DECA (Distributive Educational Clubs of America) is an organization that prepares emerging leaders and entrepreneurs in marketing, finance, hospitality and management in high schools and colleges around the globe.

The Yankee Candle Fundraiser will be helping the students attend their conferences in February and April, 2018. 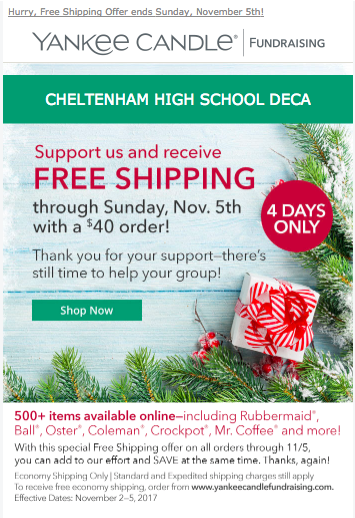 CHS DECA GOES TO THE 76ers!

Students will gain meaningful insight into the marketing and business functions for a variety of professional sports teams and other entertainment venues. Students will spend the day learning from industry executives, planning their own marketing strategies through an interactive case study, and taking in the sights and sounds of an NBA basketball game. 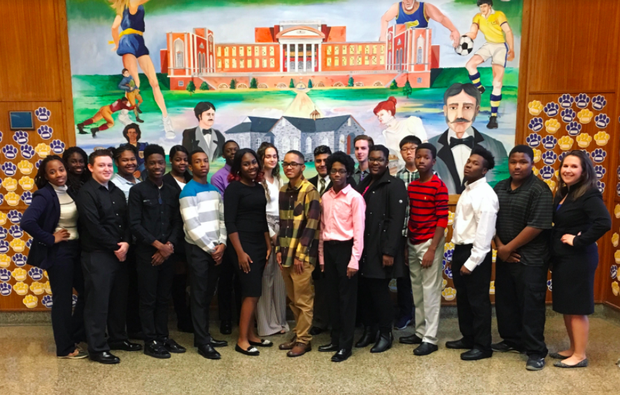 Join the Soccer Shots after school program at Glenside Elementary for a 10-week fall/winter 2017/18 Season! The objective of Soccer Shots is to introduce your child to soccer - the world's most popular sport! In addition to learning soccer, your child will be encouraged in group and team play fundamentals, active life style habits, strong character skills and more! 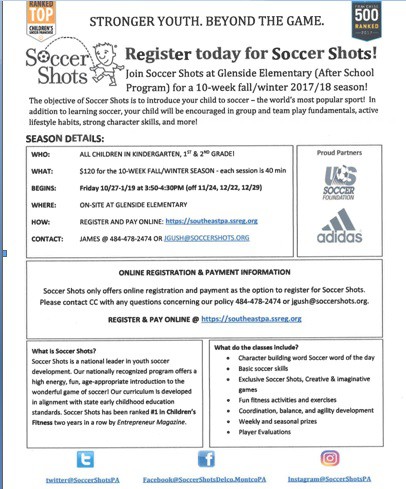 Enjoy lunch or dinner Friday Nov 3rd from Cosi (Elkins Park across from Wall Park) to benefit the CHS Baseball program. Online ordering is available for takeout orders! Enjoy sandwiches on fresh baked bread, salads, bowls, and a great kid’s menu! The below flyer is required to be presented, but it will be honored for both lunch and dinner orders!!! 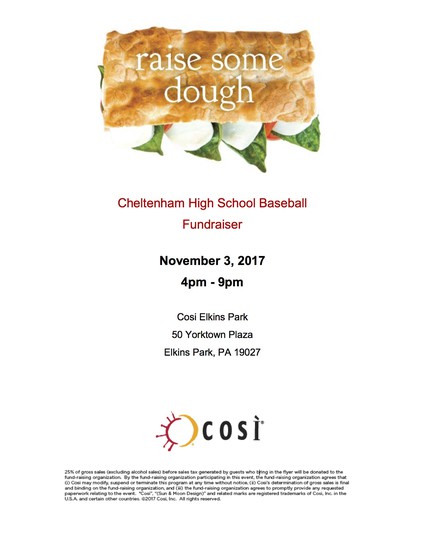 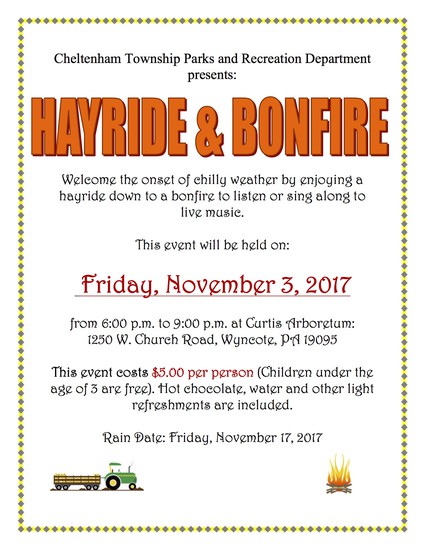 ALL YOU CAN EAT PANCAKES FUNDRAISER TO BENEFIT CHS CHOIR STUDENTS

Reminder to mark your calendars! The VPA Boosters Flapjack Fundraiser at Applebees-Jenkintown is SATURDAY, NOVEMBER 4, 2017! Bring your appetites since it is ALL YOU CAN EAT PANCAKES from 8 am - 10 am! CHS Choir Students will be serving the community. Come on out! Proceeds support CHS Choirs. For more information go to cheltenhamchoirs.org or CHS Vocal Performing Arts Boosters on Facebook. See you at Applebees! 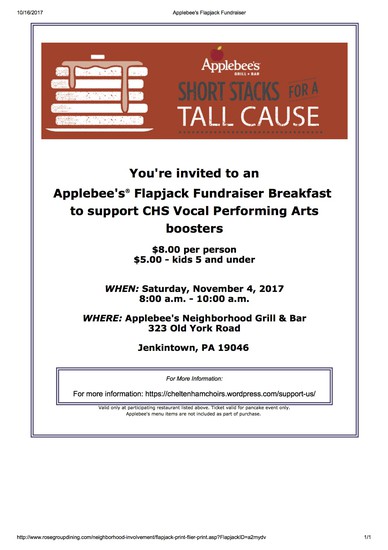 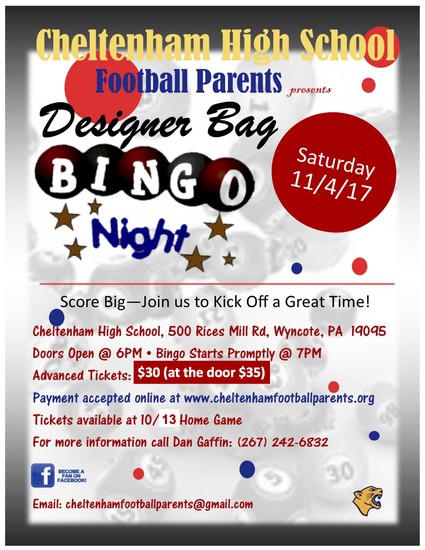 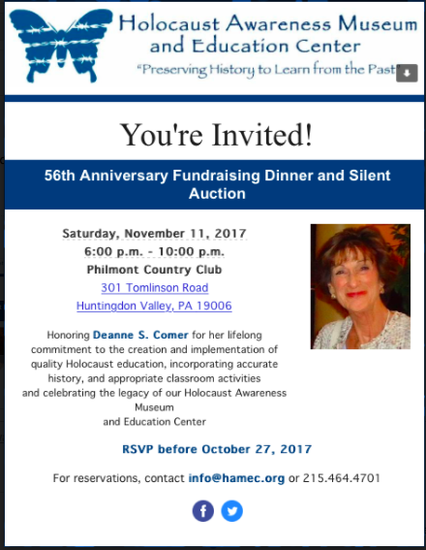 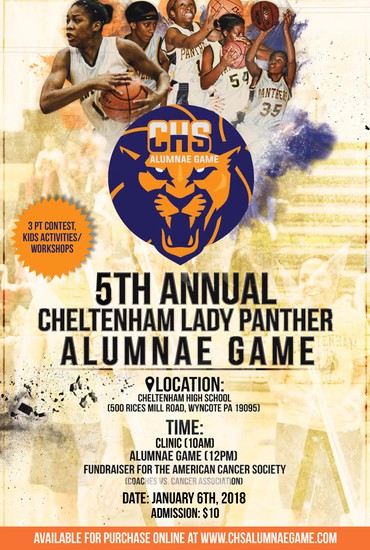