Monika is using Smore newsletters to spread the word online.

Get email updates from Monika:

The Denver Broncos winning Superbowl 50 is not the only thing about the game that stirred up excitement. During the halftime show, Beyoncé did something to celebrate fifty years of something other than football. During the show, Beyoncé’s back up dancers portrayed the image of the “Black Panthers” by their outfits and hair styles. The group promoted self defense for African Americans founded in 1966. Beyoncé and the dancers used symbols of black power throughout the performance while Beyoncé performed her new single “Formation". During the performance the dancers and Beyoncé raised their fists in unison which is said to be a symbol of black power as is the song itself. During the music video for “Formation”, attention is called to police brutality and racism. In the video “Stop Shooting Us” appears on a wall and a young African American boy dances in front of a fully armed swat team. With the social justice topic of “black lives matter” being something that is brought up often, the performance is stirring up controversy from many different angles.

A lot of people salute Beyoncé for having to do something so controversial knowing that negative backlash would follow. William Johnson who is apart of the National Alumni Association of the Black Panther Party had this to say:

Many celebrities also praised the performance through social media sites like Twitter. Ellen DeGeneres shared a tweet praising Beyonce. Andy Cohen also tweeted; “Let us give praise in every way to Beyoncé”. The theme of the halftime show as a whole was love. Accepting and loving those of color is something that needs to apart of the norm. Many people praised Beyoncé for her symbolic historical gesture and admire the courage it took to do something as such. 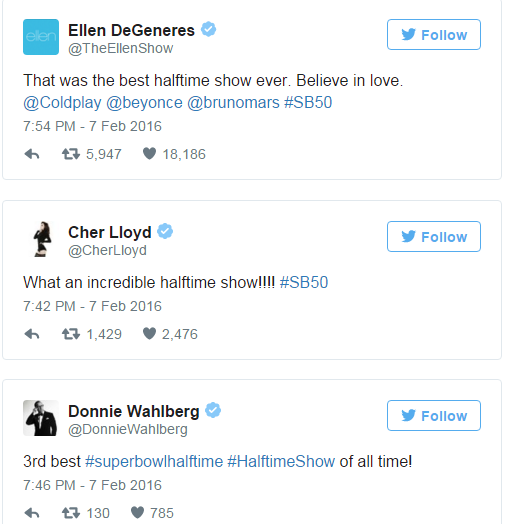 Many people see the performance as an aspect of American history so it was not shocking for Beyoncé to organize something like this because Beyonce, is Beyonce. The entire country was watching, many people think that Beyoncé should have done nothing less than send out a message with all that is happening in America pertaining to “the black lives matter” movement. This is something that she knows first hand and many people are saying that she is "anti-white" because of her performance. It was also stressed on social media and during rallies caused by the halftime show that; “Pro black is not anti-white”. 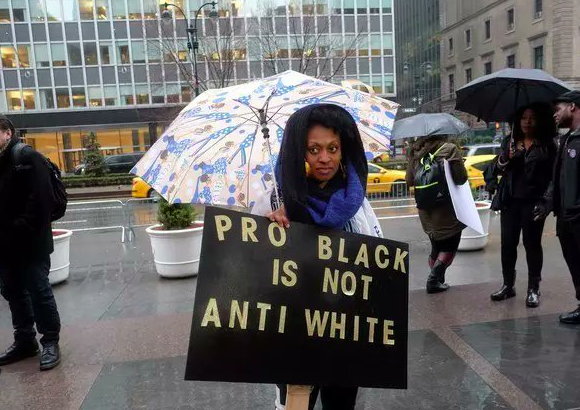 Many believe that Beyoncé had no right to choreograph a performance on such a controversial topic. Brenda Wood of the channel 11 Alive News stated that personally she liked the performance but then also discussed how other people are interpreting the performance. Wood states that people are okay with sex symbols and violence on television but when it comes to a woman with power making a statement, the circumstance is “too political”.

www.11alive.com
11Alive evening anchor Brenda Wood shared her opinions about Beyonce's Super Bowl 50 halftime performance.
In response to that many are claiming that Wood was totally out of line for praising Beyoncé. She is being blamed for spreading hate and applauding a terrorist group (though she never once mentioned Beyonce's dancers looking similar to the Black Panthers). People are so angry about the performance, they attacked a reporter who never once promoted black power during her evaluation of the performance. She simply stated her opinion on the performance as a whole.

www.11alive.com
The views expressed by Brenda Wood are her own and do not necessarily reflect those at 11Alive or TEGNA.
People are angry because politics was brought into their game. That politics was irrelevant during that moment in time. The NFL was also being attacked on social media for allowing such a controversial show in the first place because missing politics and football is distasteful.The NFL had nothing to do with this controversial situation, so why make it complicated? It is complicated because no matter what is going on in the world, there is racism and that is problem. The issue cannot be pushed aside any longer because it is inconvenient for someone else entertainment. These are human lives we are talking about. 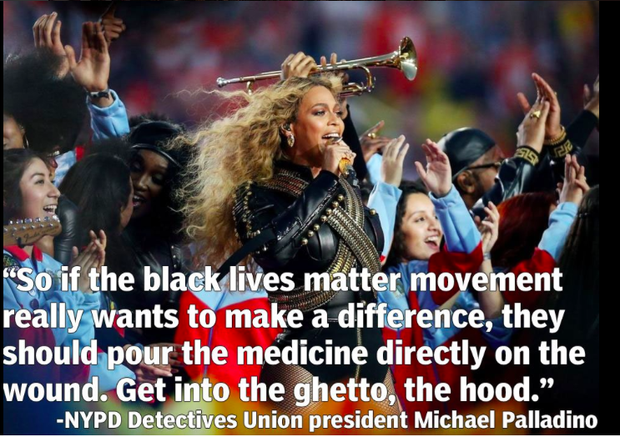 People also complained on social media comparing the Black Panthers to white supremacy groups stating things similar to; “if the KKK is frowned upon, the Black Panthers should be as well”. Many are expressing that the reverse racism is so awful in this country; if a white person did something as such, everyone would have handled it differently. 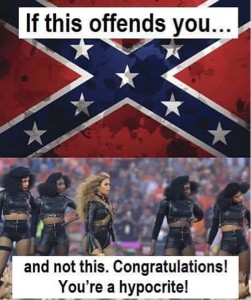 In response to those who believe that the KKK and the black panthers are similar, the following image was released: 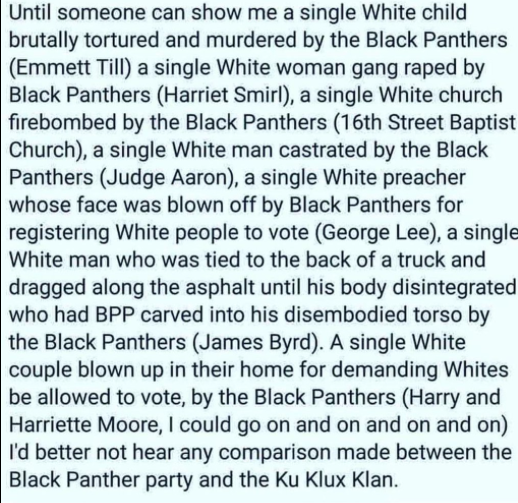 A lot of the backlash is from those who believe that Beyoncé was “smearing the police” and “devaluing white lives” in both the performance and her music video for "Formation". She was portrayed dancing on a sinking cop car was well has "stop shooting us" appeared on a wall during the video. Never once though, did she express any violence towards officers. She was simply gathering attention because police brutality and abusing power is a real thing. 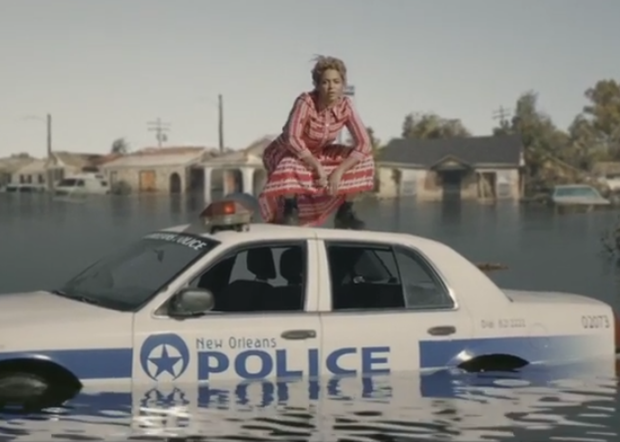 Then of course, was the comedic take of the performance brought to us by SNL.
"The Day Beyoncé Turned Black" - SNL
As Brenda Wood stated in her commentary videos of the Superbowl performance, Beyonce has a right to portray any message she chooses and being who she is, she knew that it would cause discourse. Discourse that she felt, needed to be had. Those who mostly gave Beyoncé positive praise believe that she is entitled to her own opinion, especially on something she knows first hand. The fact the Beyoncé did something this controversial is not surprising to many. Today, the country is divided on many things and a woman in a position of power making a statement was bound to happen and the different reactions were predictable. ] Beyoncé knew that this would generate conversation and she could have done a performance on almost anything and it would generate similar conversation. Basically, she cannot voice their own opinions because they are then seen as ignorant to the other side and the bigger issue is that people are very sensitive about issues such as this. They think that those in positions of spotlight cannot address certain things because they may hurt peoples feelings. Yet, they are entitled to believe and advocate for what ever they choose to believe in.

Monika is using Smore newsletters to spread the word online.