stephanie is using Smore newsletters to spread the word online.

Get email updates from stephanie:

Tea act of 1773 was an act of the Parliament of Great Britain. It was an act that citizens had to pay tax on their tea that the british reinforced on the americans because they were in great debt which lead to war around 1775 .One colonist said '' I think this is a absurd idea. " "they are just trying to take our money we work hard for , we shouldn't have to pay taxes for something like tea." 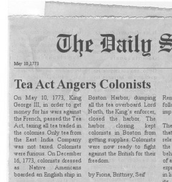 stephanie is using Smore newsletters to spread the word online.