Historical References: Explain at least 3 references to REAL Events in your novel. Use the novel to cite specific text examples as evidence for these references. Include the page number if possible and remember quotation marks.

There were many historical references in my book, The Book Thief. Once of those references in World War 2 was when there was bombing near their town - Munich, Germany on Himmel Street. "Although creating considerable apprehension about the quality of the shelter, at least they could hear the three sirens that would signal the end of the raid and safety. They didn't need a Luftschutzwart - an air-raid supervisor."

Another World War 2 reference from my book was when Liesel's foster parents took in a Jewish man to hide. "There was a young man standing in the kitchen. The key in his hand felt like it was rusting into his palm."

The last, but not least, World War 2 historical reference in my book was when the German Nazis burned the books for Hitler's birthday on April 20th. "A collection of men walked from a platform and surrounded the heap, igniting it, much to the approval of everyone."

Hans Hubermann and Rosa Hubermann are the foster parents of Liesel on Himmel Street.

(Liesel on the the left, Rosa in the center, Hans on the right)

- Picture from the movie 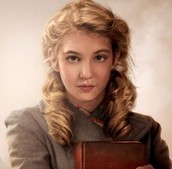 Liesel Meminger is the main protagonist (main charatcer) in The Book Thief.

- Picture from the movie 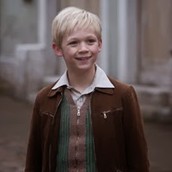 Rudy Steiner is Liesel's friend throughout the book. Rudy always tries to get a kiss from Liesel...

What is your opinion of the book? Would you recommend the book? Why or why not? Clarify your point of view with 3 or more reasons. Support your reasons with specific examples from the book

My opinion of The Book Thief is that it is a very good book and is told in a very interesting perspective - death. I also love where it takes place because I don't usually see a historical fiction book set in Germany, 1939 - 1945.

I world recommend the book because all the characters are interesting and how they are developed throughout the book is amazing. I would also recommend the book because everything connects, such as Hans Hubermann and the accordion. Also how Hans Hubermann's painting skills are useful when covering the lights of all the buildings and houses in case of bombing. The writing style of the author is also very interesting because there are parts in the book where Death - the narrator - tells you what will happen, but not in full detail. Then in some parts he gives more information about what's happening and his perspective on World War 2 and the concentration camps.

What is the main setting of the book (location and time period)?

Explain some of the major problems the main character faced and how they were resolved?

Quotable Quotes: Find at least 3 memorable quotes that impacted you. Remember to use quotation marks!

3 memorable quotes in the Book Thief that impacted me were:

“I have hated words and I have loved them, and I hope I have made them right.”

"Every page in every book can have a gem in it."

"The consequence of this is that I'm always finding humans at their best and worst. I see their ugly and their beauty, and I wonder how the same thing can be both."