Catina is using Smore newsletters to spread the word online.

Get email updates from Catina: 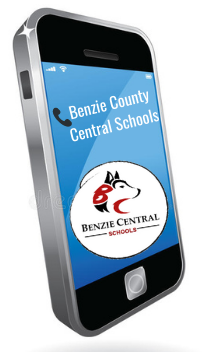 Not getting important messages or cancellations alerts via phone?

Please contact Mrs. Crossman in the Central Business Office and make sure we have your current information on file. 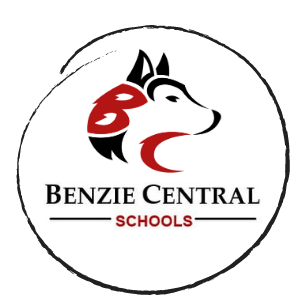 This school year continues to fly along! Our first semester ends on January 21, 2022. This will be a half-day of school with dismissal at 10:40 am for MS/HS and 11:50 am dismissal for elementary buildings. Report cards will be sent home on Friday, January 28th which is a half-day for teacher professional development with students released at 10:40 for MS/HS and 11:50 am for elementary students.

I just want to recognize the amazing accomplishments of our students. We have some stellar STUDENTS that not only excel in academics but also in athletics, performing arts, robotics, to name a few. Benzie Central has a rich history of students excelling, however, sometimes these accomplishments can be diminished. At Benzie Central, we are striving to instill in all that wear a uniform or participate in a school-sanctioned program, that they represent Benzie Central Schools and the value we place on fairness, respect, and fellowship. Extracurricular activities are an opportunity for students to learn about communication skills, how to overcome adversity, willingness to hone their craft, how to win with grace and lose with dignity, how to have admiration for skills that are refined by hard work and dedication, and how to be a part of something bigger than themselves. We ask that all in our community that come out to support our students will help us in placing an emphasis on this important work of growing future citizens of our community that are fair, respectful, and committed to representing our school district in a positive manner.

I hope you all have had a great start to the new year.

Board of Education Update

2022 BENZIE CENTRAL BOARD OF EDUCATION OFFICERS:

January is Board of Education Recognition Month 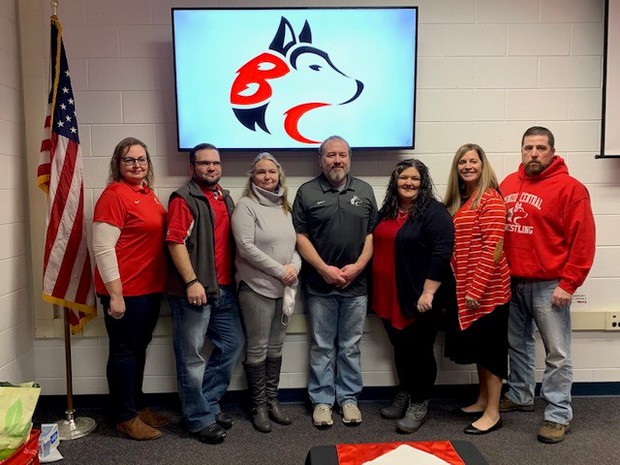 Our first parent advisory council meeting of the year was held on December 7th, 2021. A group of parents representing each building in our district came together to learn about the bond projects, strategic plan, provide input, and share information about each building. The purpose of this group is to share what is happening at each building, collaborate on ways to improve our school/community, provide input on the District's strategic plan, and serve as a voice for parents. We are grateful for this partnership with our families! 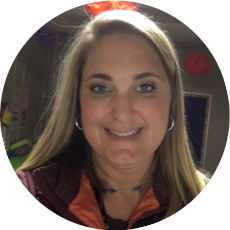 Benzie County Central Schools is pleased to announce that they hired a secondary counselor to support the Benzie Academy. We welcome Mrs. Rebecca Kik. Rebecca will lend her support both virtually and in person beginning February 14, 2022.

My name is Becky Kik and I have been a school counselor for about 22 years. I have recently accepted the new counseling position at Benzie Academy working with students grades 6-12, both virtually and in person. I am originally from Wisconsin (GO PACKERS), but I have worked for Kalkaska Schools in Michigan since 2004. I graduated from Gustavus Adolphus College in Minnesota with a Bachelor’s Degree in Elementary Education K-6. I student taught in Australia 5th/6th grade and then I attended Northern Michigan University and received my Masters in School Counseling K-12.
I grew up on the small lakes of Northern Wisconsin, so you will find me somewhere on the water-boating, jet skiing, fishing, swimming, or kayaking. I also enjoy walking, knitting, reading, and spending time with friends and family. I have a tiny toy poodle named Hooch, and I believe he will be making some virtual appearances with my students.
I strongly believe parent-counselor communication is a vital part of student success, please call or email me at any time.

Work has begun removing trees from the high school campus to make way for the new elementary school and future transportation garage. Bids have been received and approved for the Lake Ann Preschool addition; Betsie Valley's remodeling; and the High School locker room remodel. The current market has impacted our bond work. We are getting low bidder participation and bids are coming in 20-30% higher than projected. These factors have impacted our timelines and budget. The Board of Education has voted to put the transportation garage project on hold in order to reallocate those funds to cover the overages of the other projects that have been approved. The transportation project will be reviewed after all other project costs come back. The Board has been committed to maximizing every dollar received and has prioritized spending that impacts students daily.

High school students can now sign up for tutoring during their seminar. On Tuesdays and Thursdays, students in the National Honor Society will be supporting other students by offering their tutoring services. In order to connect with a tutor, students should speak to their seminar teacher. Asking for help makes you stronger, not weaker. Take advantage of these amazing supports and resources.

MDHHS is providing a free test kit, that includes two rapid tests, for each student enrolled in our district grades K-12. Parents that opt into this program are asked to stop into their child's school office to sign a permission slip and pick up the tests. The only requirement is that you complete a survey from MDHHS that will be sent to the email address you list on the permission slip. If you have questions, please contact your child's school office

Students and staff at Betsie Valley Elementary wanted to support a non profit organization. Prior to the holiday season, the held a penny war raising $2461.50. They proudly presented a check to the Benzie County Animal Welfare League. (Santa and Mrs. Claus were happy to witness this gift of giving). 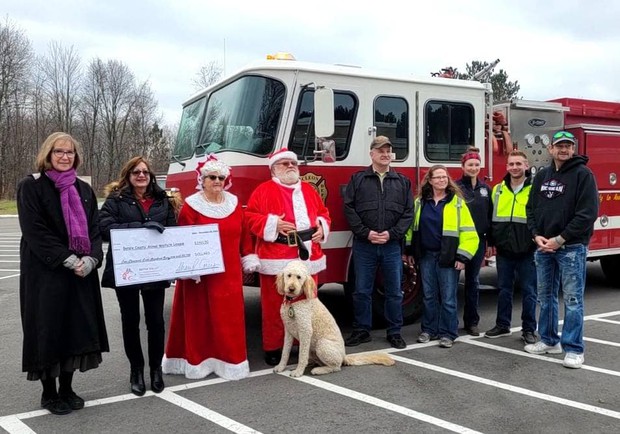 The aim of Benzie County Central Schools is to provide each student with opportunities in a supportive environment and ensure that they achieve the most from their potential. With this in mind, we take pride in celebrating all our students' achievements, whether academic, athletic, vocational, or by way of good character. 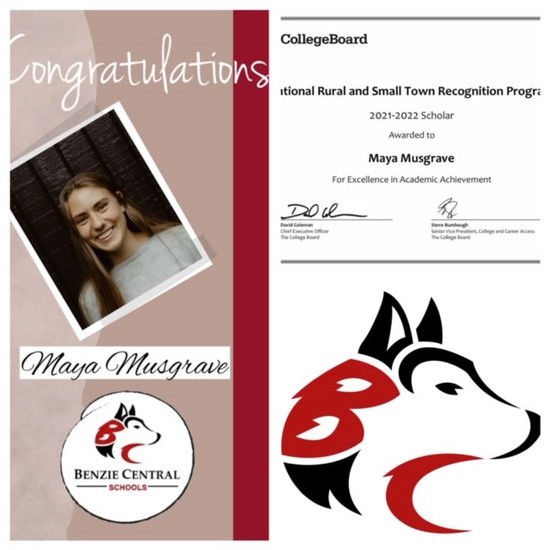 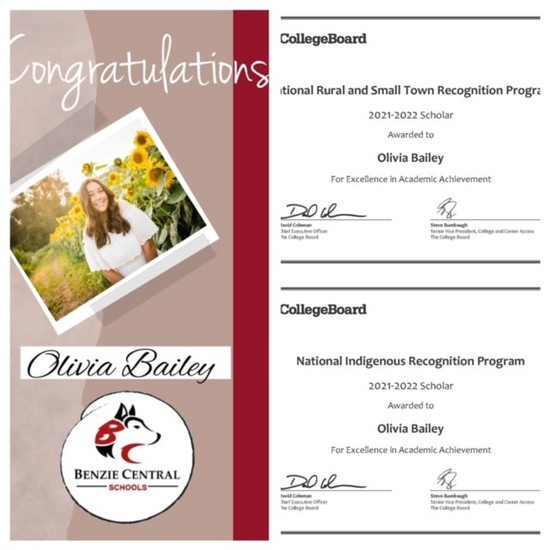 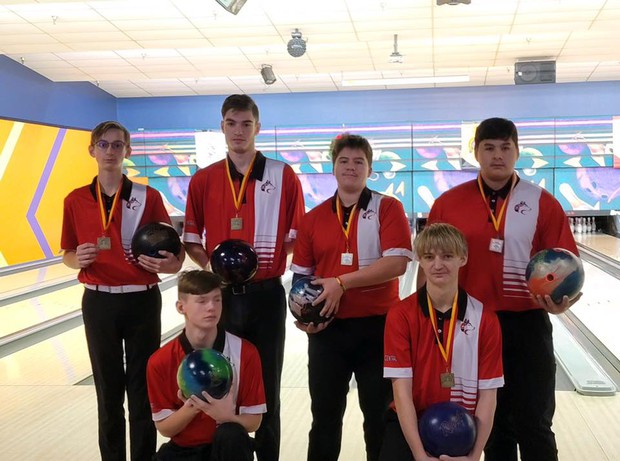 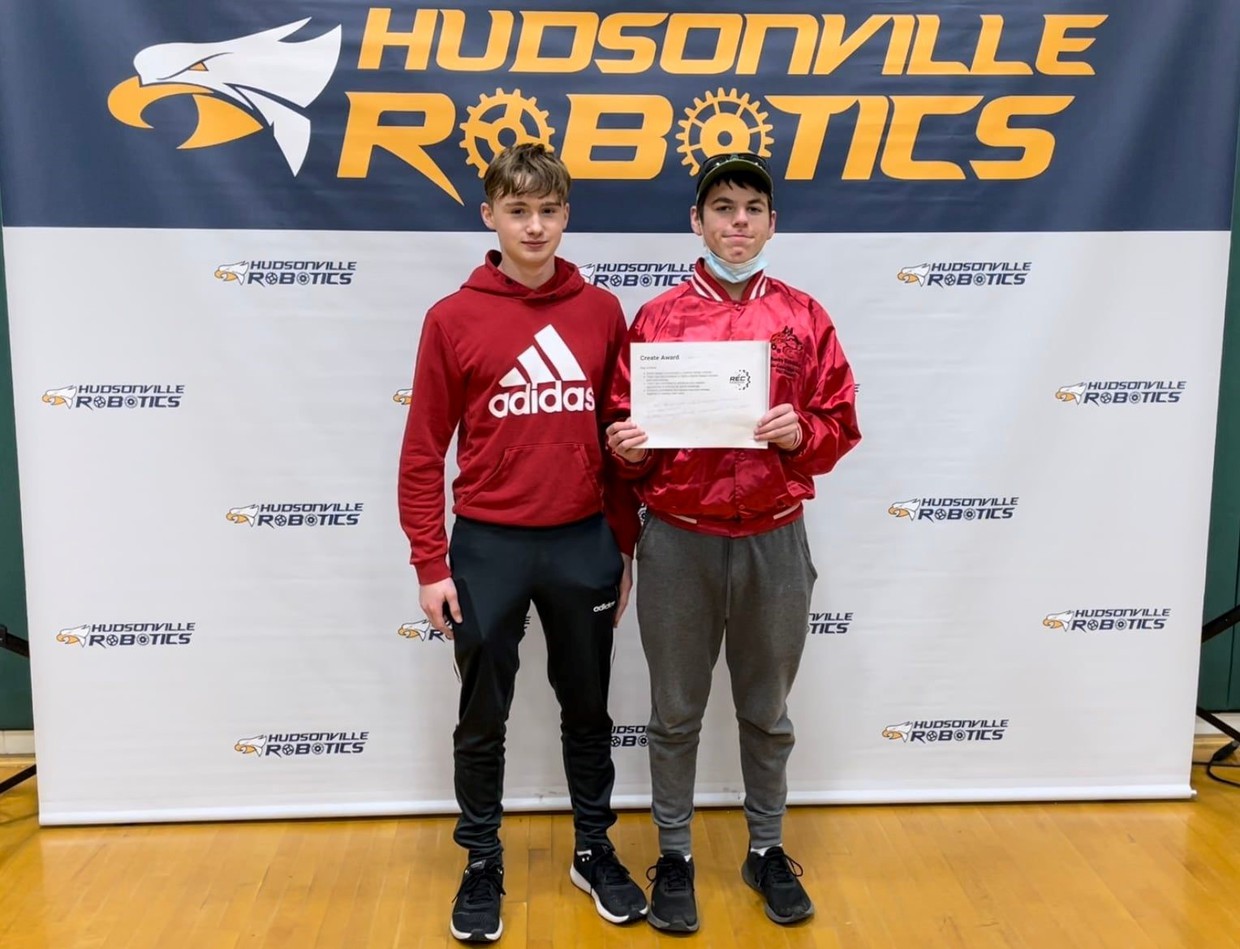 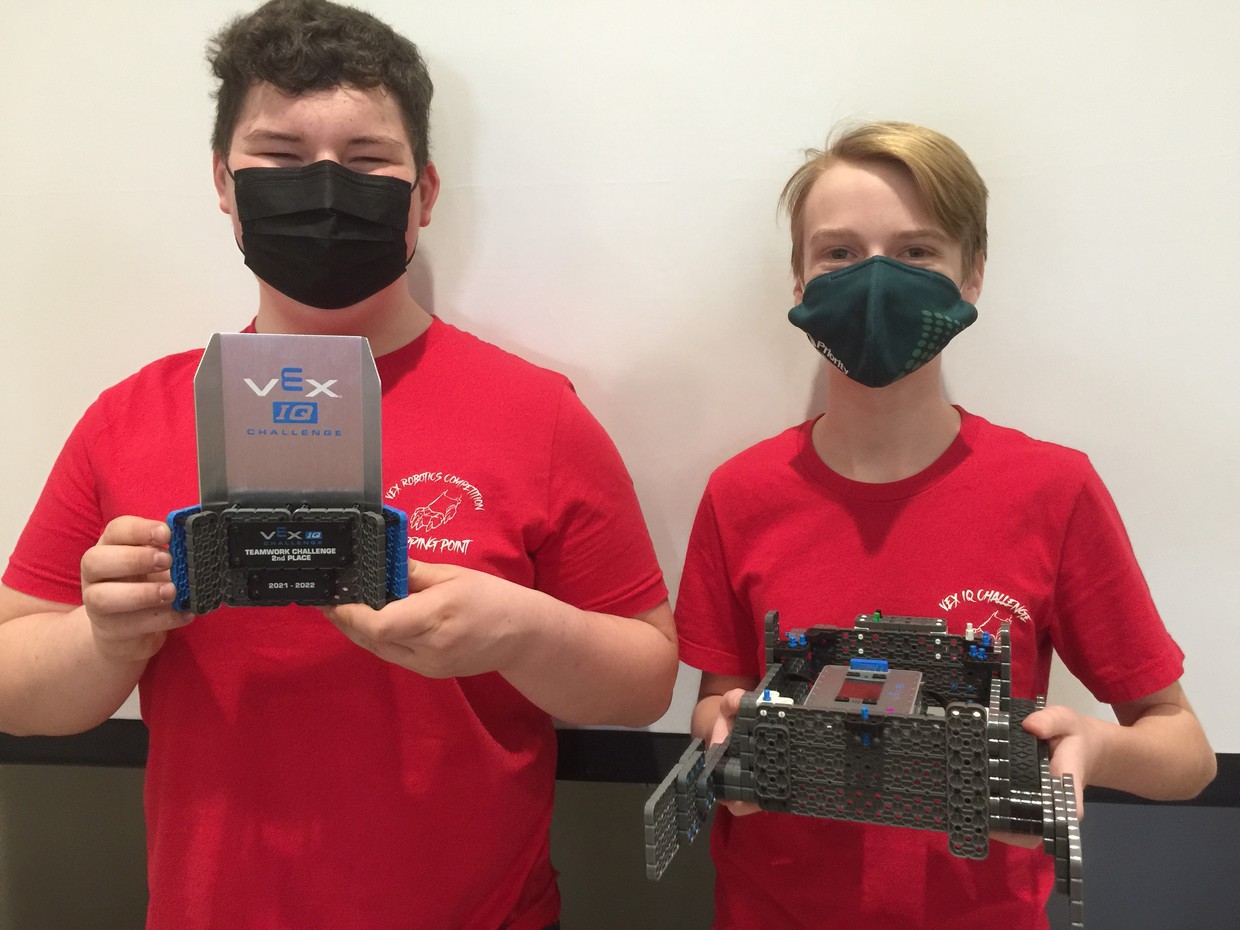 The Copemish Cyclones honored at Benzie Central on January 7, 2022

In the early 1950s, Copemish featured not only one of the best boys basketball teams in northern Michigan but the entire state.

In 1952, the Cyclones made a run to the state championship where they eventually lost to Fowler.

“We were the first team out of Manistee County that made it to the state finals in 19 years, so that was quite an honor, too. And that was all classes when they compared that,” former player Ben Blaho said.

They also featured a deep, talented roster that could score the ball.

“Mickey Finan was our scorer. He was a kid that could shoot from any place on the floor if we got him, got the ball to him and gave him a screen for about two seconds to get a shot. We were guaranteed two points,” Blaho said. “The rest of the team was good, also.”

After making a run to the state finals in 1952, the Cyclones continued to score the rock. The next season, they set the state record for points in a game in their 140-24 win over Bear Lake, where Finan led the team with 56 points.

“I don’t know why they irritated us. For something that they had said or done along the way, and we said, ‘Let’s show them.’ And no matter how Coach Fish juggled the substitutions, he tried to keep the score down,” Blaho said. “But every one of us, in our minds, were geared up. So it was, you know, just get the ball and whoosh. And so it was a good day.”

Copemish never made it back to the state finals after 1952. They merged with Benzie Central in 1963 and on Friday night, the Huskies honored that 1952 team.

“This team achieved four years of district championship. We had one year that we had the regional winner, quarterfinals and state runners-up. That was in ’52,” Blaho said. “And there were some stories in some of the papers at that time that this was probably the best team that ever came out of Manistee County.”

Blaho had many stories to tell about the team’s time traveling during the state championship run, the reaction of the town during their success and what it was like to grow up with that team. MiSportsNow has included his full interview below. 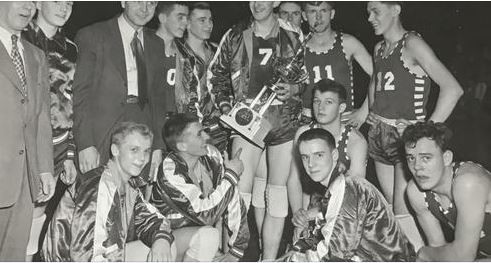 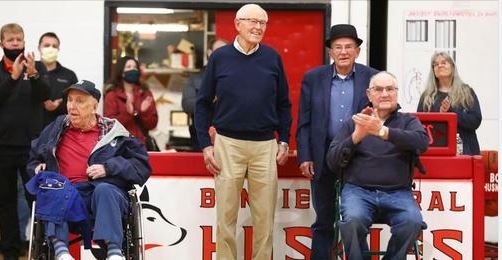 Come join our team! We are hiring paraprofessionals at the Middle School/High School. We are also looking for bus drivers. As always, we are looking for coaches, substitute teachers, secretaries, paraprofessionals, custodians, and bus drivers! Please check out our website www.benzieschools.net for more information! Join our Husky family!

If you or someone you know is in need of supplies for babies or toddlers, Advent Lutheran Church has a free baby pantry on the second Saturday each month from 9 am-noon. All are welcome! If you have an immediate need, Advent Lutheran sponsors a closet at Betsie Valley Elementary 231-378-4164.

Open at the church in Lake Ann, next to Stone Oven (park in the back parking lot and use back door entrance) on: 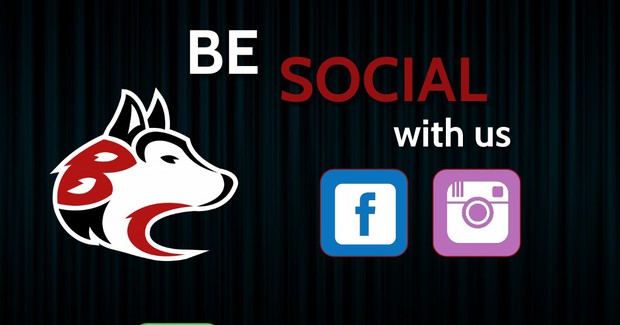 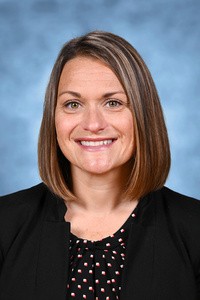 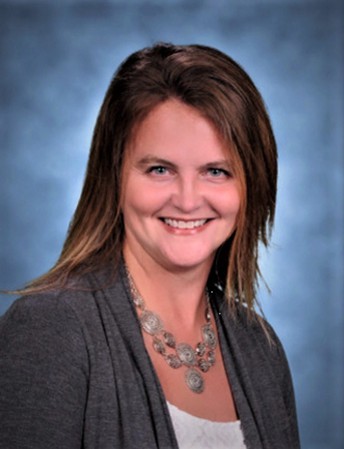 Executive Assistant to the Superintendent | Board of Education Administrative Assistant | Director of Communications, Catina Crossman

The Husky Hub is from the desk of Mrs. Catina Crossman.

Catina is using Smore newsletters to spread the word online.

Follow Catina Crossman
Contact Catina Crossman
Embed code is for website/blog and not email. To embed your newsletter in a Mass Notification System, click HERE to see how or reach out to support@smore.com
close