Refugee to Immigrant, to US Citizen

Refugee to Immigrant, to US Citizen 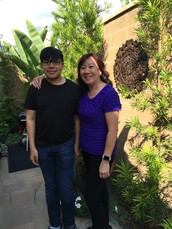 Jasmine Lin was born in Chau Doc Vietnam on 1967. She is oldest of four children and lived a decent lifestyle until Communism took over in 1975. After Communism took over, the economy and Jasmine's family started to suffer. Her parents were making barely enough to live while at the same time, Cambodia started firing bombs among the border of Vietnam and Cambodia. They fled Chau Doc for over a year until they fled Vietnam in 1978.

After 1975, Jasmine's parents had plans for leaving Vietnam. She envisioned what life would be like in America, she saw: a better education, better lifestyle, and a land of opportunity and hope. To escape Vietnam, her family had to spend all of their life savings to get on a boat to reach the international waters. They only brought jewelry and a few changes of clothes on their journey to leave Vietnam. The boat, carrying two hundred refugees, had to run on low power with no lights while driving very slowly during the night in order to avoid the Coast Guard. An soon as they reached international waters, they were chased by Thai pirates until they out-runned them by going off course. Because of them going off course, there was no food or water left, and they drifted out at sea for two days looking for Malaysia. They were then rescued by a Malaysian fisherman who brought Jasmine and the refugees to a local refugee camp on a deserted island. Later on, they were patriated by the United States to become US citizens.

When Jasmine and her family arrived in Hawthorne California, the were sponsored by a Church for 6 months. They provided them with an apartment and groceries for 6 months. The church also helped Jasmine's parents find a job within the 6 months so when they stop aiding her family, her parents would be able to make money for food and bills. For two years, she and her family had to walk or take the bus for a mile to and back from the grocery store. Jasmine's father was working as a window screen maker for those 2 years and was able to buy an old used Datsun.

As for school, Jasmine started in fifth grade and teachers really helped motivate her to learn English. She didn't make that many friends over the school years, but many of them did help her learn English. For school life not much has happened for Jasmine besides the goal of going to college. As for life at home, her parents made enough money working at a restaraunt to rent a bigger house. As Jasmine got older, she mostly lived a normal life. When Jasmine went to college her parents bought a restaraunt with the amount of money they had. She went to UCSB and graduated with a Bachelors Degree in Math Economics. The Jasmine today sees the long journey she had to go through from when she was 11 to 18 years old.

What makes Jasmine's story similar to the Gilded Age Immigration is that both want leave their country due to decline in economy. Jasmine's main reason was because Communism dropped businesses which made it harder to earn money, also because they wanted to avoid their political influence. Many during the Gilded Age, came to America for a better life, to escape poor conditions, make money, or religious/political prejudice.

The boat journey to America were very similar to each other. Jasmine's escape was part of an event where Vietnamese refugees flee to a camp in Malaysia where certain countries would bring them to there country, but it would take time. For Jasmine, she stayed at the refugee camp for about a year until the US brought them in as immigrants. Immigrants during the Gilded Age had to go on steamships where they would go to Ellis or Angel Island depending on where they were from. On the islands, the immigrants have to go through numerous inspections to ensure that they are not a burden to society.