Next week we will be on spring break! We hope you all relax and enjoy some wonderul memories with your families!

Important Dates for your Calendar 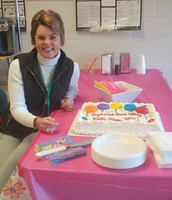 We bid a fond farewell to Mrs. Kathy Lake. Mrs. Lake has accepted a new position at Maple Dale Elementary as a secretary. We wish Mrs. Lake much luck as she begins her new adventure at Maple Dale! We will miss you, Mrs. Lake!

Needed: Symmes Elementary third and fourth grade students to assist in the preparation and production of Symmes Players! presents “Alice in Wonderland”.

If you wanted to be in the play but were unable to participate, or if you would just rather work behind the scenes, now is your chance to be a part of the production! Below are the areas where we need student volunteers. Forms were sent home this week and are due back Friday, March 31st.

*Stage Crew – On stage/behind the curtains assistance for props, costumes, etc. during the performances. This is an exciting way to help in the production without actually being a performer. The show could not happen without the stage crew. This job does require that you attend some of the Tuesday and/or Thursday rehearsals, and all Saturday rehearsals in April. You will be called/emailed to confirm your assignment. There is also a $20 fee for backstage crew t-shirt and cast party.

Saturday rehearsals on April 8th at Symmes & 22th, at the High School, 9am-noon

Since 1990, Camp Invention has taken summer fun and transformed it from ordinary to extraordinary!

In partnership with the National Inventors Hall of Fame, Edwin H. Greene Intermediate School is pleased to offer the nationally-acclaimed Camp Invention program to children entering grades 1st-6th. It’s an exciting, weeklong summer adventure with lessons that explore connections between science, technology, engineering and innovation. Children will work together to seek solutions to real-world problems and sharpen critical 21st century learning skills while rotating through several fascinating modules. The week begins on June 5, 2017 with Chris Gutermuth serving as Director of the Launch program!

Here is how young innovators will be spending their time:

All activities give participants the opportunity to explore, discover and achieve while having fun!

Local educators will facilitate program modules and enthusiastic high school students will serve as Leadership Interns ensuring that one program team member is in place for every eight children.

Register on or before March 20, 2017 using promo code Discover25 to receive $25 OFF the
base price of $225. Every registration includes a complimentary Camp Invention t-shirt. Availability is limited, so visit www.campinvention.org or call 800.968.4332 to secure your child’s spot today!

The Sycamore Band & Orchestra Boosters will be sponsoring our Second Annual mattress sale on Saturday, April 29. This has been a very successful fundraiser in local school districts for the past 10 years. We are very excited to be able to sponsor this event here at Sycamore High School once again this year.

Brand new, name brand, top quality mattress sets with full manufacturer warranties. Much higher quality for price than a retail store! All sizes, price ranges, delivery and free layaway will be available. Floor models will be on display at Sycamore High School from 10 a.m. to 5 p.m. Saturday, April 29. If you, or anyone you know is in the market for a new mattress… check out this fundraiser!! If you need a new mattress before this sale or have any questions, please contact Ultimate Fundraising Solutions at dharbin65@yahoo.com.

Proceeds from every sale will benefit SBOB

ANNOUNCEMENT OF SPRING OPTIONAL TESTING FOR IDENTIFICATION OF GIFTED STUDENTS

Although your child may or may not have taken the CogAT in December, you may request that your child be tested on the Otis-Lennon School Ability Test (OLSAT). If you wish to have your child participate in this round of testing, all requests must be made through the below online link by April 16, 2017. In order to decrease disruption to your child's instruction, this testing opportunity will take place prior to the start of the school day. We have scheduled this 45-50 minute testing session to be administered from 8:00 to 9:00 a.m. on Monday, April 24, 2017 at Symmes.

Please note that it is the parents’ responsibility to provide transportation the morning of testing to your child’s building. Additionally, know that Sycamore cannot use kindergarten or first grade scores for gifted placement.

Follow Jessica Ralston
Contact Jessica Ralston
Embed code is for website/blog and not email. To embed your newsletter in a Mass Notification System, click HERE to see how or reach out to support@smore.com
close