MIDI Designer version 2.96 is a huge step forward for our most advanced users. We're introducing the Stream Byter Plugin by Audeonic. The Plugin provides MIDI manipulation in two places: before MIDI Designer processes the MIDI, and before the MIDI produced by MIDI Designer gets sent to a Wi-Fi, Bluetooth, Virtual or Hardware target via CoreMIDI.

Stream Byter was initially released in May '13 as a way to extend MidiBridge 1.5 'out in the field' for customers and has been continuously improved since then. The Stream Byter in Midi Designer is the "Stream Byter II" version that exists in Audeonic’s MidiFire app (iOS/macOS). 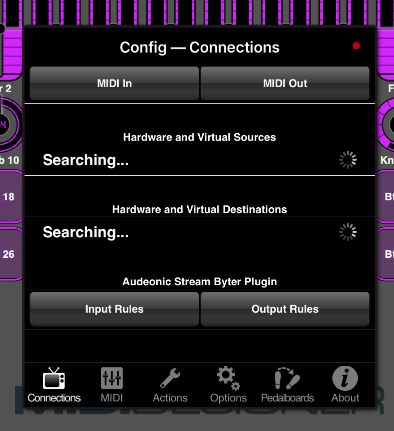 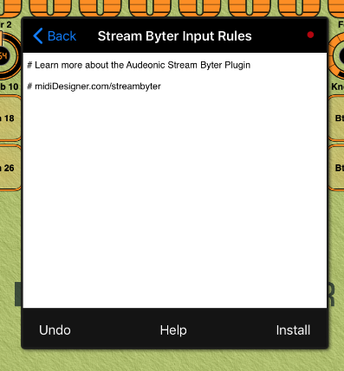 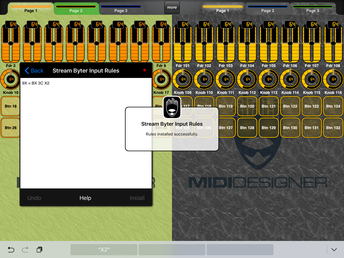 Successful rules are installed and persist and are shared with your layout. 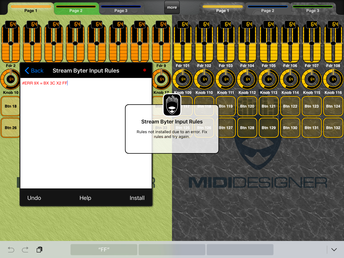 Errors in rules are marked and must be corrected before saving.

What Does Stream Byter Do?

It allows you to make custom MIDI processing modules that you design yourself using a concise programming language made up of rules. There are simple rules for matching and transforming MIDI events and more complex rules for writing modules that behave conditionally, set/examine variables, perform math/timing operations, and of course, generate MIDI messages.

Generally rules do one or more of these things, and often combine them:

Note: In the initial release, delays are not implemented in MIDI Designer Pro 2 Stream Byter plugin. This is coming very soon.

MIDI Designer Pro 2 Version 2.96 is queued for Apple App Store review and will be available on Saturday for $24.99 US.

The Stream Byter Plugin IAP will be available for MDP2 users for an introductory price of $1.99 (normally $4.99).

In addition to the Stream Byter Plugin, Version 2.96 provides Slow Reset to Default. When a supercontrol button is set to “Reset to Default,” it can now also snap the subcontrol to its value over time. This gives you a slow reset and a precursor of what’s to come with presets. 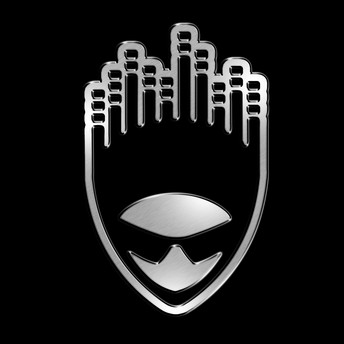 Facebook @mididesigner
The only professional-grade MIDI controller for iOS.