The Tundra is one of the many Biomes most people know of. But do you know the Food Web for the Tundra? The food web begins with producers such as Lichens. Next is the Primary Consumers including, Carribou. The next group are Second level consumers which can include Artic Foxes. The top of the food web is the 3rd level consumers. Which are Polar bears, Artic Wolves, and Snowy Owls. Finally all of these organisms are broken down by Decomposers. In the Tundra, there are many animals you are familiar with sich as Brown Bears. Also the tundra is full of animals that have adapted to the Biome to try and stay alive from Predator and to make it easier to catch prey. 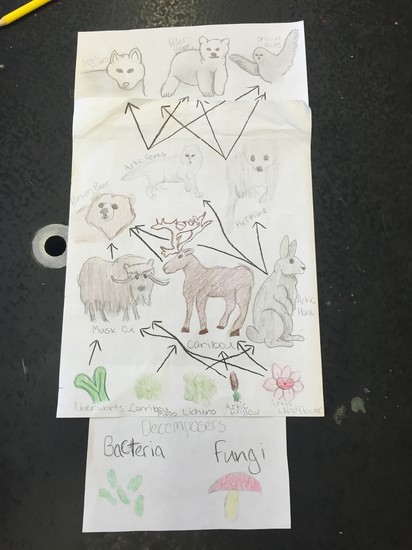 When a organism benefits and the other is not bothered. For example, the Carribou digs a hole looking for food and than the Artic fox goes and digs deeper in the hole to get it's food.

This is where both organisms benefits off each other. For example, the Artic Bumble bee gets food and nectar and in return the Artic Poppy recieves pollination.

One organism is harmed while the other benefits. For example, the liver tape worms lives in the Artic Wolf's intestine eating all it's nutrients and eventually harming it.

How do humans impact the Tundra?

Humans impact the tundra in many ways. But some of the major ways are Pollution from industries and hunting for fossil fuels. Industries let out smoke pollution and also let out oil or other harmful liquids into streams, rivers, or lakes. This can cause the air to be harmful and also take away drinking sources from animals by dumping liquids into there water source. Permafrost causes hard working conditions and makes it more harmful by drilling more pipelines and to build factories.

Lichen impacts the Tundra by being one of the main producers. Without Lichen there would be a major population decrease in all levels in the food web.

Carribou is a Primary Consumer. So without Carribou it would cause a major decrease in second and third level consumers and a increase in producers and primary consumers.

At the top of the food web. The Artic Wolf causes a normal amount of 2nd level consumers but without them second level would increase causing producers and primary to decrease which will eventually cause the second level to decrease.