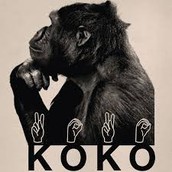 Koko was originally loaned to Francine Patterson for her doctoral research, but has stayed with Patterson ever since. Koko lived with another gorilla, Michael, who also learned sign language but died in 2000. She now lives with a male gorilla, Ndume.

Koko understands approximately 2,000 words of spoken English, in addition to the signs. Koko is able to understand more than 1,000 signs of what Patterson calls "Gorilla Sign Language".

This is Koko's trainer, and the one who the care taker. 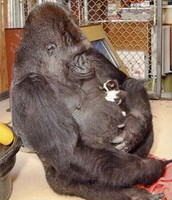 Another cat of Koko's

She's had several cats, and she acts like a mother toward them.

Follow Julia Moran
Contact Julia Moran
Embed code is for website/blog and not email. To embed your newsletter in your email, click HERE to see how or reach out to support@smore.com