Get email updates from Fred:

Changing refinishing at the atomic level

Changing refinishing at the atomic level 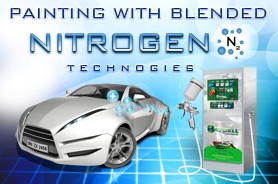 Eliminating Variables: Haydell's Advanced Coating and Application Technologies® is changing refinishing at the atomic level. It’s an old story. No matter the skill level of the painter or the quality of the product, impurities in compressed air can waste time and material. New technology may have the power to change that.

This new technology is called Advanced Coating and Application Technologies®. It is available in North America through Haydell Industries. According to the company it has the potential to increase efficiency, lower cycle time, reduce overspray and even lower the time it takes for a coat to cure.

A big part of how it does this is by replacing compressed air with nitrogen. Compressed air is best for painting when it is as dry as possible.

Even in this best case scenario, though, compressed air may contain impurities. Also the compression process as well as the movement of air through the system will cause it to become electrically charged. This results in paint that is carrying negatively charged electrons.

By itself this isn’t really a problem. After all, electrons (both positively and negatively charged) aren’t exactly uncommon. The issue arises because plastic and fiberglass are naturally negatively charged. Steel becomes negatively charged too, through the constant sanding, tacking and the batteries negative ground to the metal.Because like charges repel, this situation is a major contributing factor to overspray. The design of Advanced Coating and Application Technologies® system avoids this by positively charging the nitrogen. Since opposite charges attract, more of the product ends up on the surface being painted.

“Painters are dealing with tremendous variables, all of which have an effect on the finished product,” says Michael Haydell, President of Haydell Industries. “Different booths in the same facility can even give different results depending on how close they are to the source of compressed air. Advanced Coating and Application Technologies® system helps to eliminate those variables.”

Nitrogen has many advantages over compressed air. Unlike regular compressed air, nitrogen is anhydrous, meaning completely without moisture. Because of this, it actually removes humidity from the surface being sprayed. Since nitrogen also has an extremely low dew point (-60° Celsius), it also eliminates the problem of blistering.

Also, because the Advanced Coating and Application Technologies® system heats the nitrogen to a temperature above 50° Celsius, the coating being applied becomes more fluid. This in turn allows for a reduction in outlet pressure, also significantly reducing overspray and flash time.

A more fluid coating reduces the need for solvents. This could turn out to be vital in coming years as solvent based paints are increasingly restricted (for more on this see page 26 of this issue).

Budds’ Collision Services of Oakville, ON is sometimes called the Taj Mahal of Canadian collision repair centres both for its large size and advanced equipment. The facility has had Haydell Blended Nitrogen System in place for several months now. Sam Piercey, General Manager of Budds’ Collision Services, says there is no doubt that the system uses less paint than a compressed air system. “It’s enabling us to use a lot less material,” says Sam. “It also dries much faster, so there is also a reduction in our cycle time.”

Michael Haydell is very enthusiastic about the ability of the Advanced Coating and Application Technologies® system to reduce all of the costs associated with refinishing.

“With our system painters can spray wet-on-wet coats. You take one trip around the vehicle and do the base coat, and one trip around the vehicle on clear,” says Michael. “Combined with the other features of the Haydell system, this means a savings of up to 50 percent on time and up to 35 percent on materials.”For more information on the Advanced Coating and Application Technologies® system please contact Haydell Industries.