They saw through Stacey Bess’ love and passion for not only the school but for each student and individual that this was something important to her, and she did not even have any family members attending the school. the fact that she took in the homeless children into her arms and as her own, the families eyes were opened that if a stranger cared that much about their child and their education, then they should too.

Stacey Bess = who changed everything

Before Stacey Bess came, the "school" was basically shunned. For one, it did not have a name. Without a name, importance is lost and the pride of succeeding in a school with no name is greatly decreased. Also, there was a lack of supplies to learn. The teacher was basically the only tool the students could use, and even with that, the teacher had to use their characteristics as an appropriate tool able to work with the students. The community shunned the school because they did not believe that it was helpful really to any of them. They could not realize and believe the things it could do, like pull the whole community and families together. The families thought that getting food and doing chores in their house so they were able to stay in the most stable environment they could was the priority. Most of them did not receive an education and could not see the richness of it, and how it could be so helpful to everyone. For example, the mother of the two girls pulled them out of class to do chores, rudely interrupting the environment. Later, she was trying to fill out a job application and needed her daughters help.

The teacher influenced the community by putting meaning into the schoolroom. She encouraged the families to become a part of their students lives and check on their homework and be involved with them. she created a parent board so that they could all be on the same page. it was changed not to just something that the kids could do but also the parents. As you can see in the movie, the families were becoming happier and more focused on their kids. the parents got involved with the baseball team, piano, and even sacrificing their tv space for a childrens study hall.

Like before, no one really knew about the homeless school. It was just something that was “there”. When she first arrived and wanted help with the school, the man that had originally brought her into the building specifically told her that more important things needed to be done than worry about the homeless school. the attitude was so poor and completely no interest in it at all that Stacey Bess basically had to work it up from scratch. the communities thought about the homeless school was quote on quote perhaps a babysitting center because the children can’t change the condition that the whole family is in at that certain time. but they didn’t realize that their children’s early education and early influences like Stacey Bess would prepare them for their lives and getting out of their current homeless situation.

Who influences you most?

Family and the people who you are with outside of school are the major influences. We look up to them because they have raised us and are some of our biggest teachers.

Communities might be extremely non supportive of students because they feel like they are needed for some other purpose. for example, the community thinks there are better things to do than go to school, like help around the house. They can be harmful to students by disrupting their education and harmful in the fact that their negative opinions about the schooling system get into the student and greatly influence them. They might also not enjoy school as much if their community does not offer any help or guidance to them, up until the point where they feel like they can't do anything because they don't have that backbone. The backbone can range from the teacher to the condition in which they are living in and what society preaches about their education existence.

Stacey Bess wanted to make the children's lives better. In some ways, her teaching was not straight by the textbook of information the children needed to know but of acceptance and constantly improving their lives day by day from the joy she brought to her classroom.

The fill in teacher for the homeless school had a very negative attitude toward the students. She acted like they were some type of animal that she couldn't control. She did not try to fit into the students shoes and everything they were going through. Her background probably explained her outlook on this classroom. She expected to wake up in her lovely house, and come into a classroom that was used to rules and how things operated. Being Stacy's first classroom, she could mold it into what she thought it could be like. It was her first school and the students first school so they were able to work together. Even though it was difficult, she discovered the children's backgrounds and what was influencing them outside of the classroom. She wanted to help them however she could. She wanted to be an influence and give them the best she could. For example, she searched high and low for someone who could make gathering books and desks so they could learn, and not just be a babysitter for them, like the old teacher was. Stacy was strict and firm but that just showed her love and caring for the students.

Education has changed thanks to Stacey Bess by showing and putting more effort into the education of the less fortunate. They have become an issue that is talked about and that everyone should be able to receive a high class education. she made it a standard and a fact that books and other supplies are a necessity and a tool that should be required in each and every classroom. She had to teach based upon her knowledge and what that wide variety of grades should be taught. This has shown the world of education that given the least amount of things, one amazing teacher can do so much. Just imagine if she had been given certain things at the beginning. The homeless children already have so less so why should their education match that level?

I think that Stacey was able to implement some of her mother personalities into the classroom because she had two kids. She had been with them for so long that she picked up on things that they do and applied that to the actions of her students in the classroom. She knows how kids pay attention and I think that one of the actions she did that really helped this was making sure they were properly nutritioned in the morning so that they would have energy. She did a lot of applying learning, where the students would bring up into a conversation that they had recently been in and then she would come up with word to describe that. Also including the students in the decorating of the board and always looking at them as if they were the brightest diamond in the dirt was uniquely special for each one of them.

Stacey walked into the homeless school for the first time not knowing what she was about to walk into. She was frantic and had no control over the kids. She was definitely not aware of the number of hours she was going to put into making the school close to her environment. She kind of just rushed with the way she wanted things to go and went with it. She pleaded and pleaded for supplies and the light was finally seen and she got what she needed to make her classroom even more successful. 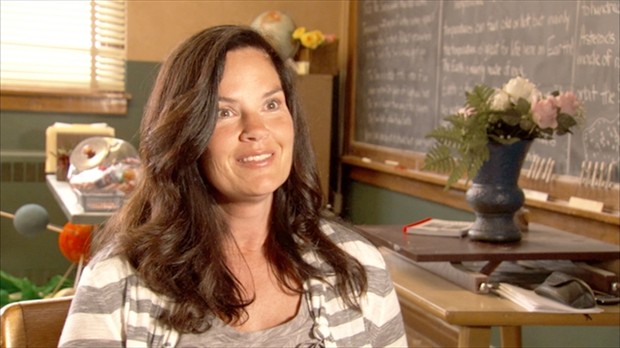